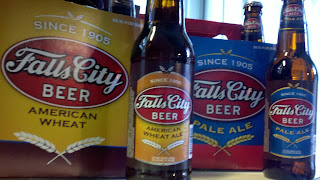 Falls City was a classic American lager beer dating back to 1905, and was brewed until 1978 before it was sold to another company and discontinued. Based in Louisville, Kentucky (and later, in Evansville, Indiana), Falls City was a staple of households in the Midwest for decades.

In 2010, a Louisville investor bought the name, and returned the beloved Falls City name to Louisville. Although the beer is contract brewed by Blackstone Brewing in Nashville, it's becoming widely available again in the Kentucky and Indiana markets. I recently had a chance to review this revived and re-configured beer. The flagship pale ale is now of a 1930s-style English formula, with another variation, American Wheat Ale, making an appearance in 2012. Both are delicious session beers that I'd gladly enjoy again. My scores run from 1 (awful) to 5 (awesome), so anything above a 3.0 will be a perfectly acceptable brew. As always, enjoy a local craft beer and down with corporate swill!

This one was contract-brewed by Blackstone in Nashville. Pours a clean golden with a little haziness. Big, rich head of white foam. Lace erratic and spike-like. Nose is toasty grains and sharp wheat. Not bad. Flavor is grainy and malty, with a pleasantly citrus hoppiness bubbling up just under the surface.

A pleasant, enjoyable session ale here. No problems at all.

Pours a pale golden, with a rich head. Attractive lace. Nose is caramel and cereal malts. Mild but not unpleasant. Taste is definitely malt-forward, with caramel and toffee notes, and plenty of wheat-like sharpness and a touch of hops for bitterness.

An amiable English-style pale ale, and not a bad beer.

Posted by Goatsden at 7:28 AM No comments: 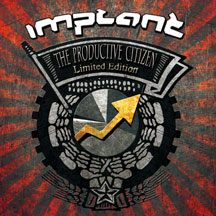 Belgian electro outfit Implant has been around for over 20 years, believe it or not, and this is their 9th studio album.

The opening cut, "Lord Knows I Tried", is a fine mid-tempo electro stomper with guest vocals from Claus Larsen of Leather Strip. "C.C.C.P.C.C.T.V." follows and is a deep and slick club cut that reminds of Front 242 gone more disco. "The City" is straight-up synthpop -- think early Depeche Mode meets Leather Strip, whereas "The Game" is moody and atmospheric electro.

Disc B is packed with 12 remixes, standouts including Leather Strip's mix of "Lord Knows I Tried" (complete with old-time blues samplings ala Recoil) and Pankow's mix of "C.C.C.P.C.C.T.V." (which is a slamming good time). Other cuts range from industrial techno to trance, and seem pretty well disposable.

Overall, solid work, if lacking a bit in character and depth. 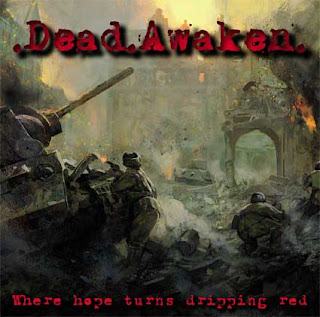 After more than a decade of demos, Sweden's Dead Awaken unleash their debut full-length, and it's a death metal beast all the way. Certainly, this duo know how to punish their instruments, as it's a tight and precise attack. "Kingdom Of Damnation" is particularly effective and memorable, with huge riffs and the requisite vomited vocals. "Mudhell" is another crusher, and slows it all down to an almost militaristic yet metallic crawl.

All of this is superbly produced, with a thickness and good mid-range alongside a deep and gutteral low-end. Dead Awaken take a proven, even stereotyped genre and present it with more finesse than most, varying tempos and switching up their game from track to track. "Where Hope Turns Dripping Red" is a must-hear for fans of classic death metal. 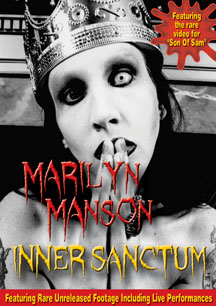 This unauthorized biographical film spans only an hour, and only examines his career up to 2007's "Eat Me, Drink Me" album, but it's fairly well-done, despite a few minor indiscrepancies (Manson's early influences included Nine Inch Nails and "Kill Kult(?)". Ah, a little research, please, wouldn't do harm, now, would it?

Minor complaints aside, "Innersanctum" includes many Manson interviews from TV, as well as fan viewpoints, and traces a solid path from the band's inception in Florida in the 90s to the mega-stardom of "Antichrist Superstar" and beyond. Most of the important points are highlighted, from Columbine to drugs to pop stardom, from Anton LaVey to Dita Von Teese. Even Manson's then-fledgling painting career is examined. So, I'd say it's a well-done documentary, encompassing most of the important facets of Marilyn Manson's rise to fame.

"Innersanctum" doesn't bring anything new to the overflowing table of Manson documentaries, but it is well enough done to recommend, especially to serious fans.

Entertain Me Group
Posted by Goatsden at 2:57 PM No comments: 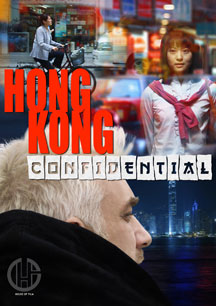 This oddly charming little indie film centers around a lonely and unhappy Hong Kong housewife named Amaya (played by the impeccable Kaori Momoi), who meets a charming English expat named Paul (played with a subtle woodenness by Lithuanian musician Andrius Mamontovas). Well, before you think "romance", it doesn't really go there. It's really a sort of subtle character study, where Amaya discovers herself in the context of her own culture, through Paul's outsider influence.

The cinematography here is quite nice, as the scenes around Hong Kong are both colorful and memorable. I would've liked a little more emotion though, especially as this is a sort of comedy/romance/drama hybrid. Overall, "Hong Kong Confidential" is a decent indie film that doesn't prove stunning, but certainly has something to offer.

MVD Visual
Posted by Goatsden at 1:25 PM No comments: 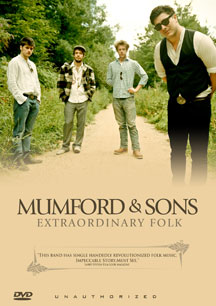 This unauthorized documentary is another shallow, lackluster attempt by "Iconic Films" to make a quick buck from a flavor of the week artist. Now, I can appreciate Mumford & Sons lively blend of folk and rock sounds, and I confess to giving their debut,  "Sigh No More", a number of listens. But this is awful.

From the outer packaging alone, you'll see where the sales pitch goes too far: "Mumford & Sons puts the "F" in folk music"? Huh? And the description closes with "...one of the greatest bands of the 21st century". Double huh? Ah well, regardless of this terrible sloganeering, this DVD clocks in at a little under an hour, and basically frames several TV interviews with poorly-written bios of the band. It all sounds clumsy and sophomoric, really. And there is no music from the band included, either, which definitely hurts even worse.

Iconic Pictures strikes again. Avoid this quickie cash-grab from them.

Iconic Pictures
Posted by Goatsden at 9:32 AM No comments: 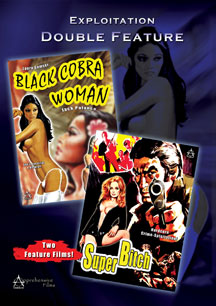 Pairing a couple of unrelated early 70s trash films, this double-sided single disc is marginal, at best. The first feature is my favorite -- the 1976 Joe D'Amato-directed "Black Cobra Woman (aka Eva nero)". Starring Jack Palance and the beautiful Laura Gemser, it's the tale of a wealthy playboy (Palance) who encounters a stunning exotic snake dancer (Gemser), who he eventually woos, leading him into her dangerous web of murder. Did I mention that Palance's character himself collects exotic snakes? With plenty of nudity and scenes of 70s-era Hong Kong, this is a curious little film that's got enough breasts and tantalizing sexuality to keep me interested.

The second flick is a 1977 Italian film, directed by Massimo Dallamano, called "Super Bitch (aka Mafia Junction)", and it doesn't fare so well. A dirty cop infiltrates a crime syndicate, and plenty of violence, murder, and big 70s-style car chases ensue. Nudity is at a minimum, but the soundtrack by the great Riz Ortolani is superb.

So, win some and lose some, this double-feature set is, nonetheless, a cool (and inexpensive) find for exploitation fans.

Apprehensive Films
Posted by Goatsden at 9:21 AM No comments: