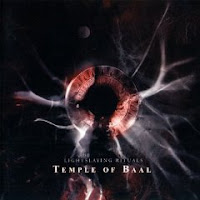 This French act considers themselves "black metal", but their third album shows echoes of speed, death, and thrash metal (and some other fringe elements) in their considerable arsenal. Indeed, "Triumph Of Heretic Fire" is a solid collision of these sounds, and, for once, the vocals are (sometimes) intelligible! It's lightning-fast, with superior drumming, crisp dual guitars with both high and low end, and a deep production by Andrew Guillotin. I like the band's diversity and adeptness at different tempos and styles. "Black Sun Of The Damned" slows things down to a crunchy classic grind sound in spots, while "Angstgeist" is a cruise missile of death metal. And this is just the first 4 tracks! Further on, the disc kicks out all kinds of blasting metal bruisers, culminating in the progressive "Blessings Of Blackfire", that brings a classic and doomy melodic angle to nuzzle itself near the blastbeats. A fine release, with something to please nearly any metal-oriented listener. (Agonia Records)

Temple Of Baalspace
Posted by Goatsden at 10:27 AM No comments: 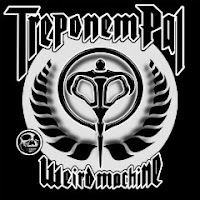 Taking their name from the scientific term for the syphilis virus, French industrial metal act Treponem Pal have been active for some years, and have seen a career littered with highs and lows. Often seen as a kid brother of sorts to their mentors/friends in Swiss avante-rock act the Young Gods, they have created some of the finest music of their genre, and they are back after an 11-year absence with a new CD. This is my quick-step assessment of their major recorded works up to now.

"Treponem Pal" CD (1989) - This raw debut was produced by Young Gods vocalist Franz Treichler, and indeed, it does echo that group's gutteral, explosive rock vibe. Vocalist Marco Neves' vocals are even a similar tone to Franz's. Nonetheless, the band's penchant for SWANS-style slow-burn grooves are obvious, as well as their prog-rock ala Voivod elements. Listen to "Slow Man" and hear for yourself their SWANS fixation in full effect. If you can get past some rather silly lyrics (who can forget the album's closer, "Soft Mouth Vagina"?), you may be surprised that this album holds up fairly well today.

"Aggravation" CD (1991) - My initial introduction to this smoldering aggro-metal act, "Aggravation" boasts production by former SWANS drummer Roli Mossimann. It's denser, heavier, and more guitar-heavy than it's predecessor. "Rest Is A War" is all-out war indeed, while the thrashy "Fugitive Soul" throws in some killer guitar samplings among the live instruments. Here is where the group really picks up some steam. There are still some slower grinding moments, but the band goes more metal here, with slicing guitars and thumping grooves. "TV Matic" is Voivod meets Young Gods, and works nicely that way, thank you very much. Their cover of Kraftwerk's immortal "Radioactivity" works surprisingly well, too. The start of something great.

"Excess And Overdrive" CD (1993) - With Treichler returning to the producer's chair, this remains the band's tour-de-force. I spent a lot of time in the 90's listening to post-Wax Trax! industrial rock and metal, and this album rates very highly, indeed. A shame it's been mostly ignored and unheard by many of those who would've made T.Pal major stars back in the day. "Out Of Reach" is a scalding, hot anthem of electronic-tinged metal. Every bit as powerful as Ministry ever were, the single, "Pushing You Too Far" is catchy, omnipotent, and combines the group's influences the most cohesively. It's simultaneously slow and brooding, then bombastic and grinding. It's no wonder Al Jourgensen drafted guitarist Michel Bassin for a Ministry tour during this era. The title track is a massive SWANS slave-grind, and "Sometimes" lashes this dissonant sludginess to a stomping metal groove. From start to finish, this is a stomping monolith of crushing mecha-metal madness, with a furious sense of urgency and swollen aggression. One of my personal favorite industrial-metal albums of all-time, seriously.

"Higher" CD" (1997) - The band was on a roll with "Excess", but for some reason, it took 4 years for this one to finally see release, and on a major label, no less. Well, this is where the band's momentum stopped abruptly. I blame part of that on the weak production of KMFDM's Sasha Konietzko, which managed to completely subdue and neuter Treponem Pal's hard-driving sound. "Higher" as an album sounds plastic, puerile, and like KMFDM with a different vocalist. The dubby-reggae sounds of "Panorama" or "Freetribe" are likely the doing of vocalist Neves, who went on, after this album, to work as dub project Elephant System, but the KMFDM production makes it all sound flat and bland. And we won't discuss their cover of "Funky Town". Sad to see the band fall so far.

"Weird Machine" CD (2008) - After 11 years away, Neves returns, with a new lineup, bolstered by the addition of some genre heavyweights -- bassist Paul Raven (Killing Joke, Prong, etc., who, sadly, passed away while recording for this album) and drummer Ted Parsons (SWANS, Godflesh). This is the group's strongest showing since "Excess And Overdrive", with songs like "Planet Crash" returning to the band's original heavy rock sound. "Hardcore Massive Soldier" recycles lyrics from past T.Pal songs, as well as referencing Sonic Youth, among others. "Mad Box" is a cover of the track "The Box" from the band's debut album, and there's more big rock songs like "Human Attack", which balance the group's "Excess"-era sounds with electronic underpinnings. Marco's vocals are appropriately gutteral and harsh, and this proves that Treponem Pal is back with a vengeance. "Weird Machine", though it's not seen release in the states at all, is certainly worth looking for if you've ever appreciated this band's past works.

Posted by Goatsden at 3:51 PM No comments:

Let Uncle Al (with guitarist Mark Thwaite of The Mission) serenade you this holydaze season.

This fun and catchy little pop song is now available on iTunes.

I don't know about you, but I hope their proposed album together sounds as good as this.

Posted by Goatsden at 5:32 PM No comments: