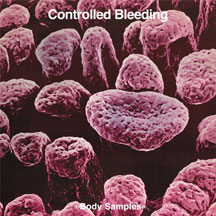 Controlled Bleeding’s 1985 debut LP for Germany’s Dossier Records is here reissued into a definitive double-disc edition, thanks to the wonderful ArtOfFact/Storming The Base label. “Body Samples” was an early breaking of tradition for the experimental group. Prior to this LP, the band had become known more for brutal power noise and agonized feedback with albums like “Knees And Bones” and a series of limited cassette albums. “Body Samples” showed the group opening their sound up with more subtle ambient textures alongside their post-industrial electronics.

Opening with the ambient-oriented “Chote/Wheels/Hair”, the band quickly dissolved minds with the brief harsh feedback piece “Lungs Half” before heading into different waters with the percussive Neubauten-inspired “Experiments With Fuck”. “Blood Sack” is another hard noise cut, before “Scourge Sack” throws some tape loop atmospheres into the mix. “II” is a brief mournful ambient piece that anticipates the band’s later interest in dark proto-classical atmospheres. “Wall Shine Seed” sounds like Middle Eastern music behind a wall of screams and feedback. “Bulges Fakes” closes the initial disc with an upbeat melodic guitar sketch.

The second disc here is 39 minutes of other tracks recorded around the same time period (1983-1985), and with a similar mix of textures and noise. The ominous “Rust Bag” was recorded for a Broken Flag compilation but was left unreleased. Other tracks were either unreleased or originally bonus tracks on the initial “Body Samples” CD release on the now-defunct Dossier label.

The diverse textures of “Body Samples” were still raw and certainly harsh, but the forceful insistence and unrelenting nature of the group’s earliest releases was held back a bit in favor of different moods and more subtle textures. Hints of the band’s later forays into ambience and beat-driven songs can be found here alongside the jagged feedback and screams. “Body Samples” is a challenging recording, sure, but it’s a classic and unique listening experience, and one that takes some unpredictable turns and diversions into areas of relevance for any fan of experimental and early electronic music. Cheers to Paul Lemos and all involved in bringing this landmark recording back into consciousness.

Controlled Bleeding site
Posted by Goatsden at 7:06 AM No comments: