Here's something cool deserving of some attention. To help benefit the victims of Haiti's massive earthquake, Pogues leader Shane MacGowan rounded up some of his high-profile friends, including Johnny Depp, Nick Cave, Bobby Gillespie (Primal Scream), Glen Matlock (Sex Pistols), Chrissie Hynde (Pretenders), and Mick Jones (The Clash), to cover the great 1956 Screamin' Jay Hawkins track, "I Put A Spell On You". It's a lovely and faithful rendition, I'm sure you'll agree. The song will be released as a downloadable mp3 soon, as well. Check the video for details.
Posted by Goatsden at 11:49 AM No comments: 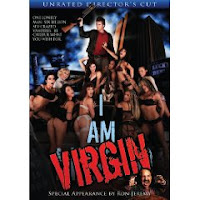 B-movies can be fun, titillating, and guilty pleasure-romps, where the right mix of camp and over-the-top situations are so borderline comedic that suspension of disbelief doesn't matter any more.
That said, "I Am Virgin", a softcore parody of "I Am Legend" with vampires, contains this campy element, but loses me in several ways. It's the tale of the last "regular" man on Earth, and he's still a (grudging) virgin. The trouble is, the plague that destroyed the world turns everyone (and it seems everyone is a Suicide Girl) into sex-crazed, nymphomaniac vampires. So he is pursued by numerous tattooed and pierced nudies with silicon implants, yet he refuses to succumb to their toothy wiles, for fear of being killed. The acting is absolutely bad, with the stripper/actresses poorly gumming their way through their plastic vampire teeth. It's hammy, trashy, overacted, and gaudy, and though this obviously isn't meant to be much more, I found it nearly unwatchable. The numerous sex scenes seemed sterile and plastic, so that doesn't save it, either. The best performance here has to be from Billy the basset hound, whose dubbed yelps and responses are spot-on. "I Am Virgin" isn't scary enough to be horror, and it's not sexy enough to be porno. No, thanks to this one. ( Cheezy Flicks Productionsvia MVD Visual)

I Am Virgin site with clips, interviews, etc.

Posted by Goatsden at 9:57 AM No comments: