A look back at April's beers...ginger, white, and Sam's stunning pils! 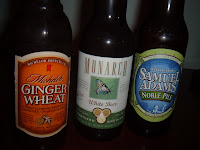 Ah, a little late this installment, but I hope you enjoy this brief look at some craft brews. I will have yet more beer reviews coming quite soon, so expect a treasure trove of tastes this month! Remember to support non-corporate artisan and local breweries, and do like Nancy Reagan and "Just say no" to lowest common denominator beer. Prost! Reviews are scored on a 5-point scale, with 1 being toilet swill and 5 being the nectar of Mount Olympus itself.

An unusual blending of citrus and spice with a zingy ginger flavor, this cloudy amber wheat ale boasts of a warm ginger aroma and a well-balanced taste. It's not harsh or complex in any way, though not offensive either. In fact, this one seems too tame and lacks personality. A promising idea, but not fully delivering.

This hazy golden Belgian-style wheat ale pours with a big frothy head and a lovely spicy citrus aroma (according to the label, it's orange peel and coriander). Tastes rich and sweet, with a nicely-balanced tartness. Quite a pleasant drink, and this one doesn't need the orange slice to give it that zesty, crisp flavor. Solid.

I anticipated this well-advertised pilsner, as it's a seasonal lager from the always dependable (though never flashy) Samuel Adams. Brewed with 5 different Noble hops from around the world, this pours a golden yellow, with little discernable aroma, oddly. The abundance of suds subsides to reveal a clean, floral hoppy character (not a shocker, there) that's light and smooth, with a nice "flavor roll", which is the mark of a complex, quality brew to my taste buds. Superb.
Posted by Goatsden at 9:32 PM No comments: 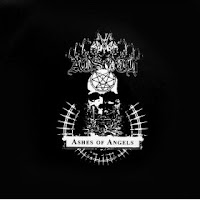 French satanic/black metallists Aosoth's second full-lengther is a bold and even atmospheric triumph for the genre, combining an unusually progressive sense of atmosphere to accent the unholy attacks within. The title track is a sturdy and unforgiving storm of epic wall-of-sound guitars that seem to carry the track's more stereotypical blastbeats and hellish vocal torrents. It's a blistering assault, and the wonderfully chaotic, churning guitars even remind me a bit of Killing Joke, which is an endorsement from me. "Path Of Twisted Light" combines the ferocity and sorrow endemic of most (good) black metal with varied tempos and funereal breakdowns. I like that the group balances their dissonant and violent tendencies with a deep sense of melancholy and mood. Perhaps the album peters out more towards the end, but the ominous closer, "Inner War", makes up for it. This one begins as a tormented ambient nightmare that brims with malevolent spirits before exploding into a morass of tight death metal riffs and screams. "Ashes Of Angels" is an unusually good release by a group that dares to stretch the black metal boundaries yet remains reasonably faithful to its original spirit. (Agonia Records)

"I Need That Record! - The Death (Or Possible Survival) Of The Independent Record Store" (director: Brendan Toller) DVD 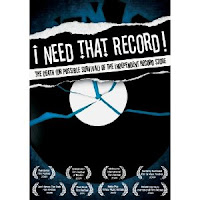 Having not grown up with iTunes or Amazon (or even eBay) at my fingertips, it's easy for me, at my age, to understand the ideals and importance of the independent record shop. I credit certain amazing, thoughtful, and creative record shops for helping me find my niche(s) in music, both as a (debatable) musician and as a collector and fan. Having a central location to find (and discuss) obscure, unknown, and amazing recorded music has been a blessing to those of us who live and breathe music. This full-length documentary examines the reality and relevance of having an indie record shop in your hometown, and the alarming reasons so many have dropped off and closed over the past decade. To make his case, director/editor/writer Brendan Toller assembles a worthwhile and knowledgeable base of interviewees, from indie musicians like Thurston Moore (Sonic Youth), Ian Mackaye (Minor Threat, Fugazi, Dischord), Lenny Kaye (Patti Smith), Mike Watt (Minutemen, Stooges), Glenn Branca, Patterson Hood (Drive-By Truckers) to writers like Legs McNeil and actual record store owners themselves. Did the corporate record industry kill the indie shop scene? Do chain music stores that cater only to the lowest common denominator ultimately hurt indie shops? Is the increasing homogenization of radio also to blame? Or is it technology's ever-changing grasp at fault? These topics are debated and discussed intelligently and with a hopeful nostalgia, and they make a compelling case to go local and indie. As if you'd consider otherwise, right? Right? (See Of Sound via MVD Visual)

Posted by Goatsden at 6:27 PM No comments: