The Leather Nun - “Whatever” CD 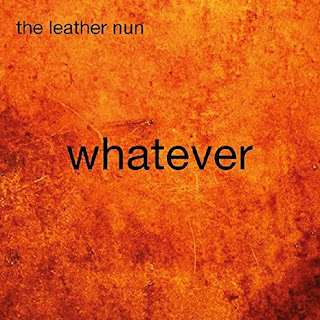 Returning to the scene after a 20+ year absence, Sweden’s Leather Nun have created a stunning and powerful return to form with “Whatever”. Known mostly in the 80s for their association with Throbbing Gristle and Industrial Records (who released their debut EP in 1979) and their flirtation with stateside success with their darkly catchy “I Can Smell Your Thoughts" single in 1987, Leather Nun’s sound falls somewhere alongside Iggy Pop’s artier experiments (in and out of the Stooges) with a trace of Velvet Underground and a touch of industrial around the edges.

This album of mostly new material opens with the lovely and introspective “All Those Crazy Dreams”. “Outside My Window” is a rumbling rock song with an ominous air, before the tongue-in-cheek interlude “Dancing In The Rain (I’m In Love)”. “Red Hot Gwen” begins with a late night piano before erupting into a sleazy big blues sound, albeit with Jonas Almqvist’s trademark Swedish-accented English. It’s a mix that’s distinctive and unique. The revved-up electro-blues of “Godtherapy” takes its name from the Jonas-led post-Leather Nun band of the same name, and fits well alongside the other cuts here.

Other standouts include the anthemic “Star (Yes You Are!)”, the haunting “I’m Not Afraid”, the swaggering “Mainstream”, the touchingly sensitive piano remake of “For The Love Of Your Eyes”, and the atmospheric “Another Rainy Day”. Yes, the whole album is top-tier.

“Whatever” is anything but negligible or passive. This is a complete return to form for a band on the verge of being forgotten (at least in America), and is the perfect continuation from the band’s past. Any fan of the Leather Nun’s “old days” will be delighted by this collection of melodic-yet-often heavy, sleazy-yet-romantic, and well-produced rock sounds that snarl darkly alongside a cheeky wink or two. A great album, period.

Posted by Goatsden at 8:16 AM No comments: