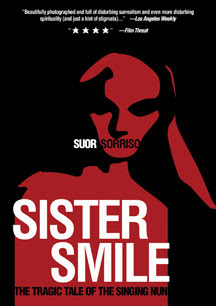 A liberal retelling of the story of Belgian nun Jeanne Deckers (who, in the early 1960s, achieved a major international pop hit as "The Singing Nun"), "Suor Sorriso" succeeds on just about all levels. Despite penning this light, feel-good pop music sensation, Deckers' life was plagued by inner turmoil and personal demons. Deutsch examines her life after leaving the convent, as Deckers (played convincingly by Ginevra Colonna) becomes romantically entangled with another former nun, and delves into a world fraught with careless drugs, alcohol, and sex. Deckers' slow collapse is tragic and gradual, with Colonna more than proving her chops in this difficult and heavy-duty role. Visually superb, with some trippy hallucinogenic sequences, this 2001 Italian-language film (with English subtitles) is a curious, interesting, and engrossing watch. "Suor Sorriso" deserves much better than "B" status. There are a couple of short bonus films from the director, both of which are worthwhile slices of experimental cinema, with heart and soul. Superb set, and worth your attention! (MVD Visual)

The Ballad Of Genesis And Lady Jaye trailer

An interesting new film on the way, focusing on the infamous "cultural engineer" Genesis P-Orridge and his sadly-departd wife, Lady Jaye, and their unusual and creative life partnership. I will be anxious to see this one, as Gen is a seriously influential person, with both Throbbing Gristle as well as Psychic TV, and when I interviewed him for nearly 2 hours back in 1995, he was quite a chatty gentleman!

The Ballad of Genesis and Lady Jaye // Trailer from Marie Losier on Vimeo.