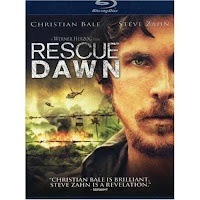 Count on Herzog to take opening shots of an air-to-ground bombing and make it look like a beautifully choreographed ballet of sorts. And leave it to Herzog to capture the majestic and lush natural scenery of a war-torn country and make it look like a National Geographic paradise retreat. But this isn't necessarily a stereotypical Herzog film, though it does feature a solitary man whose spirit overcomes startling odds -- a seemingly recurring theme for the famed German director. Starring marquee Hollywood madman Christian Bale as Dieter Dengler, "Rescue Dawn" is a true story of an enthusiastic American pilot who is shot down over Laos during the Vietnam War, and becomes a prisoner of Laotian insurgents. During his incarceration, he encounters a group of fellow P.O.W.s, who he befriends and plans a grand escape from his slightly sadistic captors. Bale's leaden performance isn't particularly impressive, but his supporting cast (including "Lost" cast member Jeremy Davies as emaciated P.O.W. Gene) makes up for it well enough. Remarkable photography, some memorable characters on both sides, and a subtle score (mostly by Klaus Badelt). Overall? Not one of Herzog's finest triumphs, but a worthy view, nonetheless.

Wax Trax! Records co-founder Dannie Flesher passed away from complications from pneumonia this past week. He was 57.

Flesher, along with longtime partner Jim Nash (who passed away in 1995), founded Wax Trax! in the early 80's to release some of their favorite musics. Years later, this label experienced international success, and brought predominantly electronic and post-industrial acts like Ministry, Revolting Cocks, Thrill Kill Kult, Meat Beat Manifesto, Coil, Front Line Assembly, Psychic TV, KMFDM, Pig, Front 242, Chris Connelly, Controlled Bleeding, the Young Gods, Pankow, Laibach, Greater Than One, In The Nursery, Foetus, and countless others to the ears of listeners across the United States and beyond. Their influence has been heavy on such followers as Nine Inch Nails, who used the Wax Trax! sound and scene to springboard to major rock success.

Wax Trax! was the centerpiece of my teenage years, supplying the post-apocalyptic soundtrack to my angsty life, and it's something I'm proud of and will always appreciate. I spent a load of money ordering the latest Wax Trax! releases back in the pre-internet days, and I owe a large part of my musical education to Jim and Dannie's Wax Trax! legacy. May he (and Jim) rest in peace.

“Dannie was a good friend. He was a true visionary and he will be sorely missed by us and all the other artists whose lives he impacted.” -- Al Jourgensen

And a fairly complete and exhaustive discography of Wax Trax! can be found here:
Wax Trax! @ discogs.com
Posted by Goatsden at 4:49 PM No comments:

It's not horror. Or is it? Kinda. Action? Not really. Real life? Definitely. Anyhow, this gutsy documentary looks to be a harrowing, interesting, and ultimately important document, and I have my friend Aaron to thank for passing on the link.
Check the trailer and sign the petition.

Posted by Goatsden at 6:27 PM No comments: