Martin Atkins has spent the better part of 30 years touring, recording, performing, networking, running a label, screenprinting, and generally 'fucking it up (pigface)'. He's spent time with a number of pretty damned important bands. (look it up, or read my old Godsend Online interview with him here.)

In essence, Atkins knows his shit.

In-between all this musical work, Martin has been working as a lecturer, and he's now an author. His book, 'Tour Smart', has been hailed as an essential read for bands or artists who are looking at touring and building up a fanbase.

This DVD release, which basically collects a bunch of (mostly brief) clips of Atkins explaining and demonstrating his ideas and experiences, is an entertaining and oftentimes enlightening bit of work. From mapping out and strategizing a tour (his easy 'how-to' here could logically save new bands hundreds of dollars and many hours), to his no-nonsense marketing basics, this DVD is a wise investment indeed, for any musician or artist, regardless of genre or affiliation. Atkins' charismatic and animated personality is down-to-earth, and his tips are easy to grasp. This one's fun to watch if you're a fan of any of Atkins' many musical projects, but it's a must-have if you're starting a band, or even thinking about it. I, personally, am wiser for seeing this one! (Invisible/MVD Visual)
Posted by Goatsden at 5:04 PM No comments:

Earache Records seem to be cleaning out their video vaults these days, as there's been not one, but THREE video comps released in the past few months.

This one, reprised from a 2000 VHS release (and transferred from that format, seemingly), actually repeats 5 clips from the previous Earache comp ('Earache My Eye'). But that's splitting hairs, right?

There are some fine, upstanding bits of extreme 90's-era metal included here. Morbid Angel's 'God Of Emptiness', something of death metal icon, is cheesy and overly dramatic. And I never felt their music had quite the bite it should've. Hair farmers Carcass turn in the blistering 'Heartwork', which is powerful until the frilly dual-guitar solos kick in. I still like it, though. Pitch Shifter are always worth the ink, and their clip for the fiery 'Triad' is inspiringly aggro - and a prime example of what I feel is the band's best period, harnessing some lacerating industrial beats and electronics with a punchy metal crunch. Iron Monkey's competent screamer 'Gorgonizer' is a simultaneously appalling and captivating pastiche of brutal wrestling footage. Ewww. And Vader's 'Dark Age' could be a parody of death metal, if not for the weirdly out of place white-clad ballet dancer. Huh?

Also included are favorites (repeated from 'My Eye') from Godflesh and At The Gates.

Anyway, this collection remains a solid encapsulation of influential metal label Earache's relevance during the whole 'alt.rock' boom of the 90's. And a lot of it's better than most of the rock that's masquerading as 'metal' lately, so take that as a tentative recommendation. (Earache/MVD Visual)
Posted by Goatsden at 9:25 PM No comments: 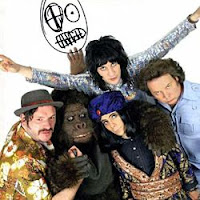 'The Mighty Boosh' was an amazingly funny BBC comedy show that existed for only three (short) seasons, but has created, in it's wake, a sort of Youtube phenomenon with the character 'Old Gregg'.

Starring, and written by comedians Julian Barratt and Noel Fielding, 'The Mighty Boosh' follows the exploits and misadventures of zookeepers Howard Moon and Vince Noir, who encounter myriad odd creatures and bizarre, surreal people as they travel the world. Moon fancies himself a 'man's man', with an eye for distinction. He's a die-hard classic jazz enthusiast, a failed musician himself (until Satan gets 'inside him'), and a self-proclaimed ladies' man. His friend, the ever-fashion-conscious glam mod Vince Noir, never fails to overshadow Moon, and his hip buffoonery translates to a whole lotta fun. Sidekicks like the hilarious Indian shaman-stoner Naboo only add to the greatness. The team's one-liners, puns, and quick-witted references are a joy to behold, and oftentimes side-splittingly funny. And, they are instantly quotable to your 'hip' friends.

There are a wealth of great skits and episodes, none of which are available commercially in North America (for shame, BBC). The official DVDs out there are UK PAL format, sadly. Nonetheless, through the beauty of the mighty youtube, the Old Gregg character is a wonderful starting point to the unparalleled majesty of 'The Mighty Boosh'.

Now, it seems the troupe are performing at festivals, on stage, and even making a movie! Here's hoping some enterprising company in the states will release this stuff for us lame Americans.

You will laugh
Posted by Goatsden at 3:06 PM No comments:

An old friend, from the glory days of Godsend Magazine, has passed away.

I befriended Donna in probably the early 90's or so, as my then-very active experimental/industrial music zine was at it's peak. She distributed it in Germany for me, and she also provided me with a top-notch international source for odd sounds, through her label (which released wonderful limited art-piece CDs from artists as diverse as Italian occult-industrial act Sigillum S, Canadian abstractionists Violence & The Sacred, Irish sound sculptor Roger Doyle, Belgian modern tribalists Hybryds, Dutch collagists De Fabriek, Paul Lemos and Joe Papa of Controlled Bleeding, the Dedication comp of international noise music, and plenty more). Her Artware mailorder catalog was an incredible resource for obscure and weird items, many unavailable elsewhere.

She was always kind and her letters were always a pleasure to receive.

We fell out of touch in the mid-late 90's, as my magazine slowly converted itself to an online entity, and I retracted a bit from the noise scene. She continued her mailorder source into the 2000's, though it seems she ceased label operations some years ago.

She was a true spirit and dedicated herself to her arts, and Donna Klemm will be missed. R.I.P.

For more info, visit the Artware site at:

Artware
Posted by Goatsden at 3:02 PM No comments: