Not quite hardcore, but a little more than softcore, this modern sexploitation is the tale of fetish photographer whose appetite for drugs and women put him into some precarious situations, and to the brink of self-destruction.

Of course, the journey couldn't be complete without plenty of trysts with hot models willing to do anything for the next photo shoot. Cash flow becomes a problem for our "hero", as he annihilates his income on cocaine and more women. We get plenty of breast-play, some mild bondage action, flogging, and some non-penetration intercourse. Interesting and watchable, though not always well-acted or scripted. Oh, and I can't forget to mention the wonderful retro-style orchestral score. Nice touch! (Independent Entertainment via MVD Visual)
Posted by Goatsden at 8:45 AM No comments: 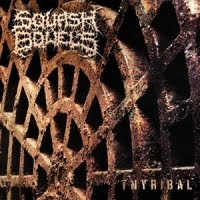 Intense and inventive grindcore from Poland, this reissue of a now-rare album from 11 years ago is full of speedy blastbeats, Beelzebub's blood-clotted "vocals", and even accents of near-industrial electronics. My copy is 6 indexed tracks, but there are really some 22 individual pieces (in 26 minutes). Cool and fun for the crusty nihilist metalhead in me. (Selfmadegod Records)

Squash Bowels website
Posted by Goatsden at 4:27 PM No comments:

Spudmonsters - "Stand Up For What You Believe" album 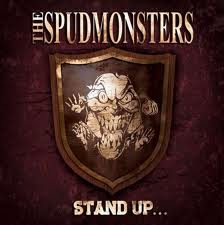 This takes me way back. Cleveland's Spudmonsters were a staple of the Midwestern hardcore/punk scene back in the late 80s and early 90s. Their sound combined speedy hardcore with elements of punk and thrash metal. "Stand Up" is their first new material in 5 years, and luckily, they've held their ground well. This is classic, old-school hardcore, with no apologies and no concessions.

"One Family" opens it all with a blur of bulldog shouts and thrash metal riffage. I'm reminded of Suicidal Tendencies a little. "Loyalty" also expresses the band's H/C philosophy well, as does the speedy "Tolerance". "It Follows" is positively anthemic, reminding me of Minor Threat with a simple melodic chorus. "Nothing Remains" is a tightly-wound attack that closes it all out. "Stand Up" proves that Spudmonsters still shred after more than 20 years. For anyone into classic hardcore, this is a must-hear. (Fast Break! Entertainment) 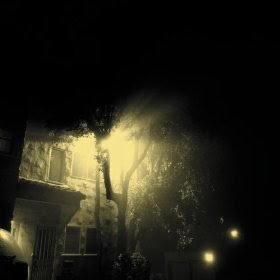 Jeff Caxide (formerly of progressive post-metal bands ISIS and Red Sparowes) returns anew with this project, and it's a continuation of the ambient textures that his former bands experimented with. Virtually gone are the thundering riffage (though it's hinted at here), and the grunted vocals. In fact, Crone is entirely instrumental. But it works beautifully, almost leaving behind the "rock" tendencies completely.

Opening with the Stars Of The Lid-style drones of "What You Dream Of", Caxide explores rich and sonorous soundtrack music. The album's highlight has to be "The Silver Hammer", which begins all lush and ambient, gradually building up to something larger, heavier, and monolithic, finally evolving into a shimmering shoegaze-drone-meets-riff soundscape. Absolutely wonderful! "Cellar Holes From A Lifetime Ago" is a floating set of tones and drones, and the title track is another mellow track that wouldn't be out of place on an old 4AD Records compilation.

More ambient and soundtrack-oriented than his previous bands, Caxide proves he's capable of many moods and textures. "Endless Midnight" is a fine album that shows the future is bright for this progeny/offshoot of ISIS. (Translation Loss)

Isis site
Posted by Goatsden at 8:43 AM No comments: 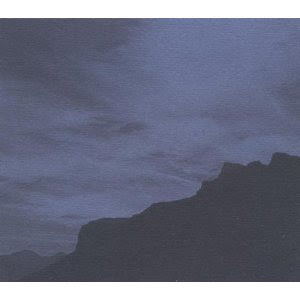 This German doom/post-metal outfit aren't quite there yet, but this debut album shows great promise. Isolation dare to combine the post-punk dirge qualities of Joy Division or Red Lorry Yellow Lorry with the gargantuan post-metal of juggernauts like Neurosis or Isis, with a tendency towards more atmospheric dynamics. The clean vocals move them well beyond traditional categorization, though I get hints of black metal deep within the mix, too, especially on tracks like "Closing A Circle", with its swell of guitars and blastbeats.
Isolation show a willingness to experiment with and subvert the usual metallic genres, and they are able to combine unusual sounds and inspirations. Here's to hoping their next release will be a stronger breakthrough. (Eisenwald)

Isolation website
Posted by Goatsden at 8:31 AM No comments:

"I Spit On Your Naked Corpse" 5xDVD 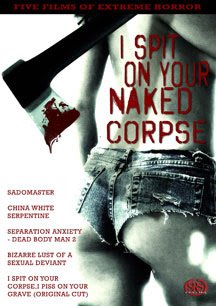 "Five films of extreme horror", so states the packaging here. I say, it's more like five Z-grade sleaze/trash films with little going for them.

"Sadomaster" begins things off on a poor note. It's an embarrassingly awful Argentinan shlock-fest with poor subtitles and even worse effects. Nazis, ninjas, plastic babies, and a masked (the box says "mashed"---hahah!) avenger (lucha libre style) all add up to a horrendous film. Avoid!

"China White Serpentine" follows, and is a fairly forgettable trip into a drug-and-sex ring headed up by a domineering female drug dealer. Plenty of blood and boobage here, but little else worth mentioning.

"Bizarre Lust Of A Sexual Deviant" is a fairly heinous exploitation flick that follows a troubled stalker/prowler who chloroforms his young female victims, only to take naked Polaroids of them. Easily, this one's a pretty sick excuse to parade out more titties. Not much story here.

Can't recommend this collection to anyone but those with the vilest temperaments, and those who don't mind watching wooden acting and amateur cinematography. (SRS Cinema)
Posted by Goatsden at 8:23 AM No comments: 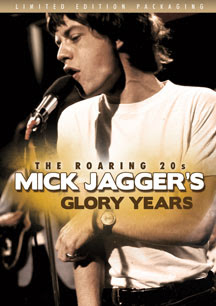 This feature-length documentary examines the charismatic Rolling Stones frontman's earliest years with the band, including plenty of photos and film clips. Jagger's early years (from the 60's and early 70's) were his wildest and most impressive, as he morphed from mild-mannered schoolboy to swaggering rock adonis, providing the antithesis of the Beatles' cleaner, more wholesome image. It was in this era that Jagger became a template for future generations of rock singers. To this day, he is a symbol of rock excess and sexual abandon. Props to the man.

As is the usual with these unauthorized UK rock bios, "The Roaring 20's" interviews several Jagger associates (but not the man himself) and the usual array of journalists and writers. I say well done, and this is a worthy addition to any serious Rolling Stones fan's collection. (Sexy Intellectual via MVD Visual)
Posted by Goatsden at 8:09 AM No comments: