So, you’d think after all this time that all the Sex Pistols TV appearances would’ve been released, officially or not. Maybe they have, but this 2+ hour collection performs reasonably well as a kind of historical document of the Pistols, from their inception to the reunions nearly 40 years later.

Far from being any kind of comprehensive set of Pistols TV spots (that would take a serious bootlegger years to assemble), “On TV” pairs some moldy oldie UK TV interviews and news bits (featuring Rotten, Jones, Matlock, Cook, Vicious, McLaren, Vivienne Westwood, and other punk icons like David Vanian and Pete Shelley) with plenty of live footage and brings it all together in chronological order, up to the 2006 reunions and beyond.

As well, we get a wealth of always-entertaining interviews with Lydon, including some from the early Public Image years and newer ones that reveal that he has all of his trademark cunning insults and cynicism still firmly in place. Maybe there’s a little too much regarding McLaren himself, but as it stands, “On TV” still should please staunch Sex Pistols fans, and those interested in this band’s meteoric rise and fall, especially in relation to the fickle British media.

Cool release, and worth the dosh, ya git!

Posted by Goatsden at 3:25 PM No comments: 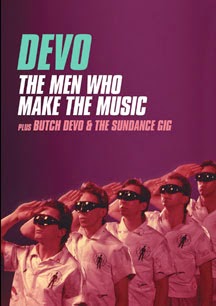 Re-releasing a seminal collection of early (1978-79) Devo video clips is a no-brainer. The “spud-boys” from Ohio were instrumental in the synthesis of punk, new wave, and avante-electronic sounds in this era, and the aftereffects are still being felt within the industrial and electro-rock genres, among many others. Those who label Devo a forgotten “eighties” band (solely because of their mega-hit “Whip It”) are sorely mistaken, and this video proves it.

The first half of this release, “The Men Who Make The Music”, stitches together early Devo promo videos (“Jocko Homo”, “Satisfaction”, and “Secret Agent Man”, most notably) with live clips and some interstitial nonsense that somehow ties it all together. It’s classic, lo-fi, and rough-shot overall, and the direct-from-VHS transfer doesn’t help. But that’s part of the charm here. Essential Devo, really.

The “filler” here is a complete show from the 1996 Sundance Film Festival, where Devo revisited some of their earliest songs, all the while dressed in 20s-style prison garb. There are some great songs here, particularly my favorite, “Beautiful World”, but with the semi-bootleg quality, this is one for the completists, namely.

Final words? Great stuff, and overall a must-see for fans of one of America’s smartest “pop” groups. 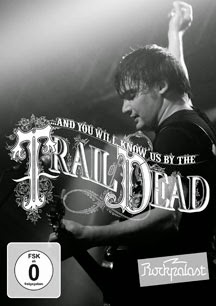 Emerging out of the Austin, Texas post-hardcore/indie rock scene in 1995, …And You Will Know Us By The Trail Of Dead have jumped and co-mingled genres as well as any of their peers could ever hope to. I've always considered them to be an anomaly. On one hand, they're as able as anyone to write a clear, clean Beatles-esque pop song. But often, Trail Of Dead tempers that with traces if hardcore and post-rock textures. It's a compelling, if hit-and-miss mix.

This show is a multi-cam extravaganza recorded at the huge Rockpalast Festival in Germany in 2009, and features plenty of instrument-throttling, punchy walls of punk aggression, and lovely piano interludes. Yep, you heard that right. Schizophrenic, maybe, but this show leaves no doubts that Trail Of Dead are masters of their craft. There’s a ton of energy here, and with the superb recording quality, and wide cross-section of songs (including favorites like “Will You Smile Again” and The Giants Causeway”), this is a must for fans.

As well, there’s an extensive bonus section of live and backstage footage from 2005 and 2006, further upping the ante. Needless to say, for anyone interested in catching the raw energy of Trail Of Dead, this DVD is a must-see.

Labels: And You Will Know Us By The Trail Of Dead, Austin TX, Rockpalast 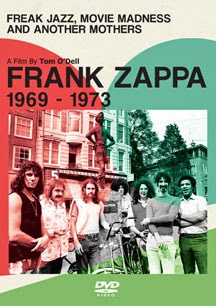 Despite Sexy Intellectual's releases being "unauthorized" biographies, their works are often labors of love, and quite well-researched. This exhaustive documentary is no exception, and holds up as one shining example of a comprehensive and well-done “fan-made” document.

Centering on Zappa's work from 1969 to 1973, this 2.5 hour film interviews Zappa's bandmates, associates, and session musicians (as well as the usual journalists and music historians). There are plenty of video and audio clips to illustrate the story and background behind the recording of seminal jazz/fusion albums like "Hot Rats" and “The Grand Wazoo”.

Any serious fan or student of Zappa’s intelligent and baffling proto-jazz experiments should make this an essential viewing. Very worthy!

Posted by Goatsden at 2:00 PM No comments:

Why films like this get made I really cannot explain nor understand. Lacking any unique angles or interesting characters (everyone here is a bad stereotype), this mild indie pseudo-trash film (I hate to say “B-movie”) offers no sex nor nudity, despite what is implied by the title.

Starring the fetching but unmemorable Lauren D’Avella as teen pop star / private investigator Sexina, this micro-budget indie comes across like a bad late-night TV movie, and fails to rise above. Hammy acting, a lame storyline, and deceptive packaging — Adam West does appear, but only in voice until the finale, and Davy Jones of the Monkees DID sing the theme song, but Annie Golden (of "Orange is the New Black") is only on a minor supporting role, rather than second billing as on the packaging. So points off for borderline false advertising on several counts.

In this miserable film, Sexina intervenes at a high school, undermining the cliques at a high school and championing an underdog, all the while fighting the “evil empire” of Glitz Records and manufactured boy bands.

This is a terrible movie, through and through.

Wild Eye Releasing
Posted by Goatsden at 9:40 AM No comments: