Ministry's later forays into anti-Bush thrash metal were spotty but good, with some catchy tunes and an over-the-top cartoony attitude. But rewind back 23 years to Al Jourgensen's 1986 LP, "Twitch", and you'll see that Adrian Sherwood's heavy dub/industrial mixing was instrumental in the development of Ministry's transformation from dance pop to techno thrash. A seminal work that inspired legions of followers into the 90's, "Twitch" is still unjustly overlooked as one of the classic "industrial" albums. It's a collision of Cabaret Voltaire and Test Dept, with a social conscience.
Adding new touring members Paul Barker and Bill Rieflin (both of whom would contribute much to the band in the years to come), Ministry toured briefly in 1986, doing 13 dates across the USA and Canada. This is a terrific recording of their 04.10.86 date in Toronto, at the RPM Club, courtesy of bisquitodoom@prongs.

Twitch Toronto
Posted by Goatsden at 8:48 PM No comments: 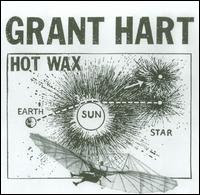 Best-known as drummer for Minneapolis punk icons Husker Du, some would be surprised to hear this new solo record from Hart, his first in 9 years. All but abandoning his more raucous punk roots, "Hot Wax" sees collaborations with members of Canadian post-rock acts Godspeed You Black Emperor/ A Silver Mt. Zion, but even this is overshadowed -- probably for the better, due to Hart's fine, mature, and well-developed songwriting skills. "You're The Reflection Of The Moon On The Water" is a superb, raved-up rock song that admittedly owes much to Patti Smith. "Barbara" is a sweet bit of 60's-style English baroque pop, and "School Buses Are For Children" is a well-written and heartfelt classic rock-style song that showcases Hart's considerable skills as a vocalist -- a fact seemingly forgotten and overshadowed by his years in the background. "California Zephyr" is a simple pop song that's effectively catchy and narrative, as is the 60's pop of "Sailor Jack". Taken as a whole, "Hot Wax" is an amazingly well-composed collection of diverse, tuneful, clever, and timeless songs that will withstand. Full accolades! (MVD Audio)

Grant Hart site
Posted by Goatsden at 4:41 PM No comments: 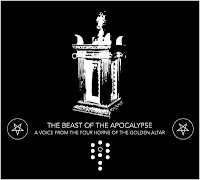 Well-muddy, densely-mixed black/gothic metal from the Netherlands that comes out of the starting box like a clusterfuck of screaming, evil noise, and seldom does it let up. The drum programming and buzzing guitars are just part of The Beast's wall of sound experience. I hear layers of keyboards, and a solid bass guitar foundation adding a sense of darkened mysticism among the screaming chaos. It's all a bit deafening, taken as a whole, though, with little variation among tracks. "And They Withdrew Up To Their Heavens" has some symphonic loops barely audible through the song's nearly 8-minute duration. Tracks like "Twins Of Jesus" even resemble early Godflesh, to some degree, with plodding drum programs, distorted vocals, and mountains of guitar grind. These guys could destroy, given some clearer production and added song texture. As it is, "A Voice" shows great promise, but remains slightly under-done. (Transcendental Creations)

Labels: black metal, Netherlands, The Beast Of The Apocalypse

Kites With Lights - "The Weight Of Your Heart" CDEP 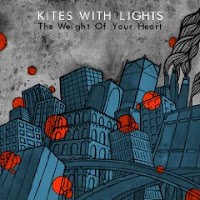 Blasting from the past, KWL, this new project of Floridian Jonah Cordy re-examines classic 80's-era synthpop with these 5 light and upbeat songs. Starting out with the title track, these dance-worthy melodic pop tracks with understated vocals echo Bernard Sumner and New Order -- understated and tentative with a touch of melancholy. The more lush "We're Ready" conjures the spirit of a more laid-back OMD. Kites' clunky old drum machines, percolating electro-synth melodies, and swaying, almost-whispered vocals are textbook 80's, before synthpop split itself off into mainstream pop and club techno. Cordy has done his homework, and this brief set of tunes takes me back to more innocent days. (24 Hour Service Station)