For better or worse, I am like most others in that I am prone to judging people. It's easy and convenient for us to label and use prejudice towards others when we see or hear of their differences or qualities we see as somehow "beneath" us or "wrong". This documentary is a sensitive and telling account of a pair of very different individuals who have been labeled by society as "stalkers", and despite their differences, are labeled as marginals of society, and thus have encountered much adversity in their own respective personal journeys.

What do Jeff Turner and Kelly McCorrmick have in common? They are both confessed super-fans, to the point of obsession, of 80's teen-pop star Tiffany. Through restraining orders and unfulfilled passions, Turner (a charismatic 53-year old with Asperger's syndrome) remains convinced Tiffany is a Christ-like figure who he must get closer to. McCormick is an intersex (hermaphroditic) person who believes Tiffany and him/her are destined to be together. Sure, both people are clearly slightly out of touch with consensus consciousness, but, through the wonder of first-tiime director Donnelly's lens, we see both as individuals, frailties obvious but with unexpected (and even perhaps admirable) strengths as well.

Sure, labeling these people as "crazy" is convenient, but seeing them as real humans is also easy, thanks to "I Think We're Alone Now". It's an engrossing and fascinating (even slightly touching) look at life just to the left of "sanity". I say bravo! (MVD Visual) 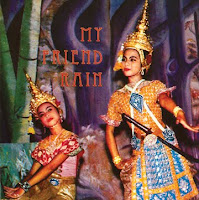 This brief documentary presents an almost-surreal travelogue of Myanmar, Cambodia, Laos, and Thailand, and, in the true tradition of Sublime Frequencies, these are disembodied images of real life, as raw and rough as it must really be. Forsaking any sort of narration, there are only the native sounds to accompany the rich visuals. Bits of radio pop music filter into the stew, as the camera captures street musicians, celebrations, food preparation, labor, ecstatic dancing, marketplaces, and some oddly morbid artworks and murals. Interspersed with these scenes are wonderful images of monsoons blanketing the ancient cities and streets.

"My Friend Rain" makes no attempt to embellish or tie together the images and sounds. It's presented to you, the viewer, as a look into a window of cultures far off the beaten path. There's no touristy views here. It's an honest slice of these Asian countries' everyday life, an attempt to capture the raw realism of a culture far removed from Western eyes and ears. Succeed? You bet. (Sublime Frequencies)

Posted by Goatsden at 7:25 PM No comments:

Neurosis - "Enemy Of The Sun" CD 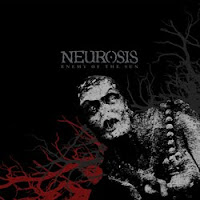 Originally released in 1994 on Alternative Tentacles, this early Neurosis album shows the Oakland band growing into their trademark symbiosis of tribal percussion, dark industrial ambience, and full-throttle aggro-metal. Since becoming an icon of what's now termed "post-metal", Neurosis' blackened soundscapes (which owe an acknowledged debt to early SWANS) paved the way for so many later acts, it's hard to even quantify.

Here, the band open with the raw "Lost", which is almost asphyxiating in it's density and painful throb/grind. "Raze The Stray" opens with the atmospheric vocals of Erika Little, accented by piano and keyboards. But this is soon interrupted by a screaming rupture of drums, primal shouts, and grinding guitars. The track returns to the moodier sound thereafter, creating an epic dirge that pulses and shifts to and fro. It's a little reminiscent of (Controlled Bleeding side project) Skin Chamber as well, who were working in a similar arena at the time, daring to join experimental industrial sounds and textures with brutal grind metal. The title track is a feral assault, with samples augmenting the percussive attack.

Neurosis' success lies in that they have learned to temper their destructive and primal urges with moments of stark, blissful beauty. And their varied use of nontraditional metal instruments also ups the ante. "The Time Of The Beasts", for example, dares to include horns, even, creating an almost dusky Southwestern vibe amidst the pounding noise, which segues into the 16-minute drum circle & didgeridoo piece, "Cleanse". Fans of defunct California tribal-percussion voodoo-conjurers Crash Worship will appreciate this wickedly esoteric track.

To make this reissue a worthy purchase for fans who may already have an earlier pressing, Neurot Recordings has sweetened the deal with 2 bonus tracks - a demo of "Takeahnase" and a live version of "Cleanse". "Enemy Of The Sun" is a 78-minute set of dark tribal grind metal with few equals. Recommended. (Neurot Recordings)
Posted by Goatsden at 7:09 PM No comments: