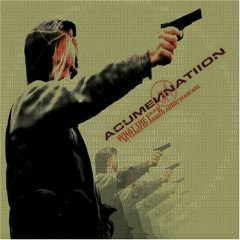 Not so much a retrospective as a rarities collection, this lengthy 14-tracker includes a wealth of unreleased pieces from this veteran Chicago industrial-metal act. Opening with the new cut 'The Wreck Of Us' (with guest vox by 16Volt mainman Eric Powell), Acumen Nation unleashes a torrent of hardbeat rock gems that don't expand the genre, but are heavy and well-enough produced to compete with the heavyweights. KMFDM frontwoman Lucia guests on 'Life's Last Breath', and the rest of the tracks are either remixes or unreleased demo versions of Acumen classics like 'Revelations Per Minute', 'Queener', or 'Gun Lover'. All-in-all, 'What The F*ck' is a solid intro to a band existing just outside the mainstream, and who've quietly produced some of the most solid heavy electro-metal of the last decade. (WTII Records)
Posted by Goatsden at 2:43 PM No comments: