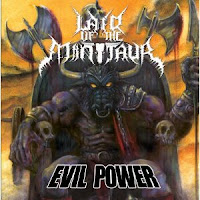 Chicago's LOTM are a monstrously heavy and thick clot of brutish metal aggression, tailormade for fans bands like Slayer or Mastodon. I'm particularly impressed by this trio's unrelenting bludgeon, which ranges from amped-up classic Viking-style metal to thrashy speed to almost stoner-death metal. And it's all played with a reckless and intimidating precision that pummels the head and churns the guts. The opener, "Attack The Gods", is a piledriver of intense riffage and gutteral vocals. The formidably-titled "Let's Kill These Motherfuckers" is a freight-train of raging wartime testosterone and a bold anthem indeed. Ditto for the mighty "Evil Power", and "We Are Hades", which would make an ideal soundtrack for the entrance of the Four Horsemen of the Apocalypse. Now that would make a killer video for these guys. One can only hope. But I digress.
Despite the fact that there are 11 tracks here of bowel-loosening aggro-metal, the attack never ceases to be mesmerizing or adrenaline-soaked. Perhaps because it's a short blast at only 30 minutes? Regardless, Lair Of The Minotaur are among modern metal's finest hopes, remaining faithful to classic metal themes and content, yet synthesizing them into a unique hybrid of ultra-heavy styles. Classic. (The Grind-House Records/Southern Lord)

Be sure to check the amazing new video for "Evil Power" on their own site (it's been banned by youtube and myspace):
Lair Of The Minotaur site 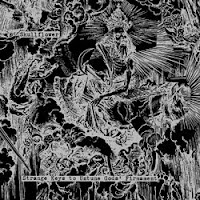 Veteran UK noise act Skullflower are about as far from the mainstream as possible. Kudos to Neurot Recordings for bringing this savage yet mystical monolith of guitar-oriented noise to American ears (with no regard for commercial potential). Yes, this is truly a labor of love, though some listeners may be scarred by the end of this 2 hour mass of mostly formless and rhythm-free aural siege. Beginning with the fried feedback of "Shivering Aurora", the first disc moves abruptly into the drone/noise masterpiece "Starlit Mire", which refers to noted chaos magician and artist Austin Osman Spare, not Psychic TV, I'm sure. From there, it's back to the reckless "Enochian Tapestries" before the all-consuming invocation within "City Of Dis". "Basement Of An Impure Universe" is the sound of pain, pure and simple. Disc 2 is no less forgiving, opening with the grinding "Nibelungen" and continuing to the absolutely brutal catastrophe of "Blood Mirror Streams". While some bands coax different sounds out of their instruments, Skullflower strangle them, for lack of a better description. Theirs is the sound of all-consuming terror. Not for the faint-hearted, "Strange Keys.." is an overwhelming, overloaded, and ultimately purifying listening experience. (Neurot Recordings)

Skullflower at Wordpress
Posted by Goatsden at 9:00 PM No comments: