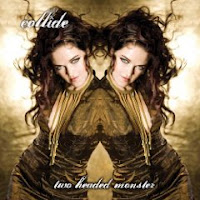 This California act's fourth full-length CD strikes with a powerful and dynamic blow, balancing the heavy with the sweet as well (or better) than any band I can think of. Anchored by the tough and darkly-evocative electronic grooves of programmer/instrumentalist Statik, and led by the sensual, ethereal vocal stylings of kaRIN, Collide's modern rock attack is multi-faceted and melodic. Some place them firmly in the 'industrial' or 'gothic' category, but here Collide move way past those classifications and take bits of hard rock, as well as swirly shoegaze aspects, into their lush mix. 'Chaotic' features drums by Tool's Danny Carey and bass by Curve mastermind Dean Garcia, and this synthesis of live instruments with Collide's electronic foundation makes for one of the band's finest, and most sonically well-developed songs to date. 'Head Spin' is a twisted pop song with an unusual tempo, while the thumpy and hallucinogenic 'Two Headed Monster' could almost be mistaken for Skinny Puppy (who Collide have been known to associate with), if not for the cool and seductive female vocal. The dramatic 'Shifting' shows an almost orchestral side, and this vibe works well, showcasing this group's skill at any style they tackle. Simply, 'Two Headed Monster' is Collide's best work thus far, and any follower of dark and stylish modern rock should investigate now! (Noiseplus Music) 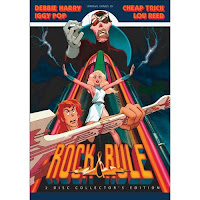 This feature-length, 1983 Canadian animated rock obscurity is tailor-made for fans of stuff like 'Heavy Metal', Ralph Bakshi's innovative films ('Fritz The Cat', 'American Pop', 'Lord Of The Rings', 'Cool World'), or even Peter Chung's much later 'Aeon Flux' TV shorts. It's the tale of a young rock band who find their lovely co-vocalist (Angel) abducted by an evil rock star (a vaguely Bowie-esque chap named Mok) in order to summon a gigantic demon. Yeah, so that sounds a bit iffy, but stay with it - it's fantasy!
Needless to say, Mok's advances towards the imprisoned Angel are met with resistance, especially from aspiring star and co-singer Omar, who has a romantic interest in Angel himself. With music from Blondie's Debbie Harry and Chris Stein, Lou Reed, Cheap Trick, and Iggy Pop (not to mention Earth, Wind, & Fire), this epic sci-fi rock fantasy tale is interesting and fun, and definitely aimed at adults (the club scene in particular is, well, full of gigantic jiggling breasts). Some segments (the musical interludes) are quite psychedelic, and I'd bet there were more than a few teens who got stoned to watch this way back when...Fine work, and I should add that the soundtrack (in remastered 5.1) is incredible - sounds flew all over the room! Nice touch.

Posted by Goatsden at 9:09 PM No comments: 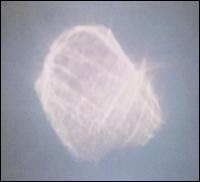 Soft, blurry, and wispy folk-drone-pop from this Oregonian composer (known to his parents as Thomas Meluch), 'Temper' continues in the direction of his inaugural release of a couple of years back, and offers better songs. The strength of Benoit Pioulard's fragile and often delicate popsongs are his bouncy, almost upbeat melodies. But coupled with the well-layered and deftly-mixed guitar textures are Meluch's vulnerable vocals, all swirled-up in a melange of effects and introspection. It's an effective mix - and it works wonderfully in the composer's favor.
The first track, 'Ragged Tint', is among the more rhythmic cuts here, and sets the stage for the more folksy offerings that follow. Recorded at home by Meluch, the sound is quite lush, flowing, and really quite lovely. If you can imagine something like Nick Drake as remixed by Kevin Shields, you may understand the overall vibe of 'Temper'. Highly enjoyable music for sunny days and a glass of lemonade. (Kranky)

pioulard site
Posted by Goatsden at 7:37 PM No comments: