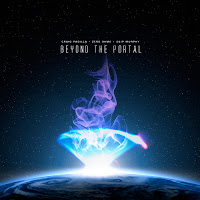 A pair of skilled analogue synthesists (Padilla and Murphy) here team up with cosmic flutist/ethno-woodwind expert Zero Ohms (aka Richard Roberts), and the result is, not shockingly, a spacy ambient electronic album. Sans any kind of substantial beats, 'Beyond The Portal' is an expansive, drifty collection of sterile synth washes that unfortunately plays it rather safe. Percolating sequencers, lilting almost-melody, and blippy analogue effects make up the whole of the album, but it doesn't seem to really go anywhere, atmospherically or melodically. The title track, which concludes the album, reminds me of the myriad forgettable ambient releases of the 90's, which just isn't a good thing. Don't get me wrong, I adore well-constructed atmospheric ambient sounds, but 'Beyond The Portal' just seems to have no teeth whatsoever -- it's fluffy and lightweight, and I'm left a bit under-whelmed. (Lotuspike)
Posted by Goatsden at 9:16 AM No comments: 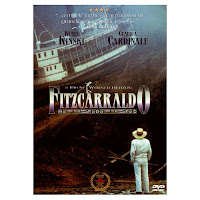 Among Herzog's many masterpieces lies this 1982 film, starring Herzog mainstay Klaus Kinski as Brian Sweeney Fitzgerald -- a financially-troubled railroad man/opera lover who finds himself in colonial Peru, contracted to helm a steamship deep into the Amazon rainforest in search of a lucrative rubber tree forest situated in a dangerous and inaccessable location. Well, after most of his nervous and grumbly crew leaves him, the few remaining steamshipmen manage to tenuously befriend (and enlist the help of) the native Peruvian Indians, and defying all logic and odds, they manage to create a true engineering marvel and drag their steamship over a mountain in order to reach the remote rubber forest. Fitzgerald (aka 'Fitzcarraldo' to his friends) does all this in order to fund his dream of opening the first opera house in Peru. This, his true passion for the world of music and art, is what drives him to these lengths (well, this and his love interest, the beautiful and remarkably understanding Claudia Cardinale as Molly, who helps fund his seemingly mad quest).
Like most of Herzog's films, the cinematography is stunning, as he captures the grand and epic scale of remote locales (and creates amazingly dreamlike images) like few directors can. His characters are memorable and well-cast, and the scale and scope of his stories are far-ranging, unique, and very human. 'Fitzcarraldo' is a masterpiece of cinema, and here's to it getting it's due one day. 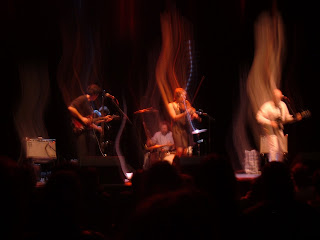 A (mostly) pleasant 3+ hour drive to St. Looie with longtime friend/fellow road-dog Will D. was basically only impeded on by some rather heavy rain (and some shady tire traction scares), but even the downtown St. Louis I64 woes (a series of detours and illogical signs) went quite smoothly. We hadn't seen the Pageant since last year's mighty fine Explosions In The Sky show (when c and i misbehaved and thoroughly enjoyed our Fat Tire beers and L.I. Ice Teas), but it remains much the same. The same wonderful little Thai restaurant (I think it's called simply 'Thai Cafe') across the street satisfied our post-drive, pre-show hunger, and we were able to get a small table at the Pageant's in-house Halo Bar. A really overpriced draft Fat Tire ale ($5.25!! Preposterous!) was my ticket. Before long, we were able to enter the club early, and with that, good seats were easy to stake claim to. The balcony we usually snag was closed this show, sadly, but our near-center table was just fine, thanks.

The opening act was White Magic, who I hadn't really explored very well, though I did recognize a song or two, perhaps from compilations. The dual male-female vocals were interesting, and the sparse instrumentation was at times spooky, other times whimsical, and often very folk-oriented, albeit with a pleasantly dark, swampy vibe, and a hint of a kinda Irish folk. They played a fine 45-minute set and seemed to win over the still-thin audience more and more.

Running just about perfectly on schedule, Will Oldham and his Bonnie 'Prince' Billy band entered the stage, including the lovely, talented, and charismatic Cheyenne Mize (violin, vocals, guitar), the immensely-talented longtime Oldham sideman Emmett Kelly (guitar), Dirty Three drummer Jim White (who seemingly effortlessly was all over the place, never missing a beat), and Town & Country's stand-up bassist Josh Abrams. All contributed vocals and their own unique personalities to Bonnie's music, which ran all over the spectrum, from older Palace/Bonnie songs (transformed into richer, fuller country-stomps or stirring rootsy ballads). The first few tracks seemed to be a medley of tunes (could anyone clarify?). Particular highlights for me were 'Strange Form Of Life', in which Mize's sweet Patsy Cline/bluegrassy vocals were a perfect substitute for Dawn McCarthy's, and the closing tune, the iconic 'I See A Darkness', which, though re-tooled for his new band, was simply harrowing and managed to inspire a respectfully near-silence from the sometimes-rowdy St. Louis crowd. 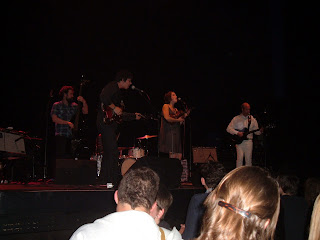 The onstage chemistry between Will Oldham and Cheyenne Mize made for some stunning call-and-response vocals, and their duets ('The Girl In Me' is brilliant and sweetly-freaky, and thus far only available on the 'Louisville Is For Lovers Vol. 9 CD, which I need to pick up) were spot-on, with Mize's exuberance and instrumental virtuosity the perfect foil for Oldham's worldly and wise earnestness. Everyone on stage seemed to be having a blast, and it translated to a better-than-expected show, with the audience becoming rather riled-up especially when the band really kicked it in. Oldham even hammed it up with the audience at times, referencing TV show 'Lost' and a hilarious remark about cocaine, which was his tongue-in-cheek explanation for his dapper all-white outfit.

A superb concert, and easily better than the last Bonnie show I saw (his Wild & Woolly anniversary celebration in Louisville in 2007).

Posted by Goatsden at 4:55 PM No comments: