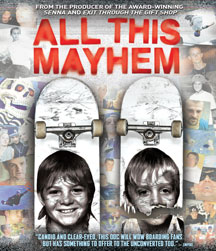 Chronicling the lives of Australia pro skaters Tas and Ben Pappas, this superb and hard-hitting documentary details the rise and fall of two brothers who reached the top of the skating world. But, with such success came pitfalls, and this sad and cautionary (but never preachy) tale shows how their “rock star” lifestyles came to a head in a tragic way.

Blessed with determination and mad skills, Tas and Ben moved to America to compete in skating championships in the early 90s. They successfully competed head-to-head with the greatest, including Tony Hawk himself. However, their youth and inexperience dealing with fame and money got them into serious drugs and partying, and eventually led to Ben being arrested, and his getting involved in other criminal activity (and eventually to his untimely passing at the age of 28).

“All This Mayhem” isn’t just for skating fans, and although it’s centered around the sport, director Martin tells the tale like a biography, with tons of rare VHS material of the Pappas brothers, interviews with them (and their family and friends), and archival photos. It’s a fascinating and engrossing film, and one that shouldn’t be discounted by anyone with an eye toward the highs and lows of human existence.

Posted by Goatsden at 7:40 AM No comments: