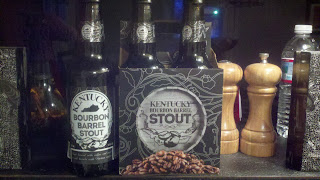 Lexington, Kentucky's Alltech Brewing (terrible name) has been responsible for one of my favorite bourbon barrel aged ales, Kentucky Bourbon Barrel Ale. When I saw a new variation in their lineup, I had to try it. And I'm glad I did.

Kentucky Bourbon Barrel Stout is, as the name states, a dark ale aged in bourbon barrels. It's also aged with Haitian coffee, so it's an exotic treat already! Pours a deep, opaque black with ruby highlights. Fair head with tan bubbles, but very little lace. Nose is roasty coffee. I don't sense much of the oak barrels here, but as I love coffee, this is still pretty damned nice.

Taste is definitely coffee-dominant, with an aftertaste/finish that shows a bit of the bourbon whiskey character. This is really a nice, easy-drinking brew to sip (it's a stiff 8% ABV), and a must-try for coffee-beer fans. And it's a much more affordable (at $12-14 per 4 pk.) option for Bourbon County Barrel Stout fans. I'll buy this one again, for certain.

Alltech (aka Kentucky Ale) site
Posted by Goatsden at 7:23 AM No comments: 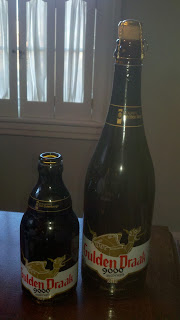 The  history of beer and brewing in Belgium goes back hundreds of years. And although Gulden Draak (brewed by Brouwerij Van Steenberge N.V. in Belgium) isn't brewed by monks in an ancient abbey, it IS a premium, top-shelf beer in a rather elite class. Late 2012 saw a new variation on the classic Gulden Draak formula, with the release of Gulden Draak 9000 -- a 10.5% ABV quadrupel ale in the ancient Belgian abbey ale tradition.

Gulden Draak 9000 pours a hazy, clouded amber with a huge, zealous head of gold-tinged suds. It dissipates fast, leaving an erratic, chunky lace. Nose is, like a true Belgian, full of spices and dark fruit. I get some clove action alongside dried berries and yeasty bread. Nice.

Taste comes across like a freight train! It's strong and assertive on the palate, with a wallop of fruit, spice, and bread right up front. The finish leaves a warming, boozy kick. Truly a big, heavy, and complex ale that rivals the original Gulden Draak. Classic and beautiful!

Mentallo & The Fixer - "Music From The Eather" 2xCD 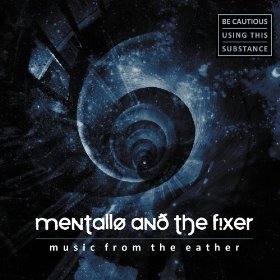 Having listened to these Texan brothers since receiving one of their cassette demos way back in the late 80s, it's good to see them still around and further honing their heavy sequencer electronic body sounds. "Music From The Eather", the Dassing brothers' first release in 5 years, consists of two extended discs.

"Good News And Warnings" (CD1) is 13 tracks (and over 70 minutes) of hypnotic and moody instrumental electro-industrial soundtracks. Tracks like "Untapped Regions" are darkened slices of electronic textures that harken equally to the percolating sequences of Tangerine Dream and the noisy horror-scapes of Skinny Puppy. "Shadow Of My Former Self" is a thick, layered assault of sequences, samples, and rhythms -- complex but still based more on rhythm than melody. "Wandering Off In The Dark" is a reflective 12-minute journey, complete with Biblical verses, hallucinogenic sound gurglings, and wicked rhythm programming.

The second disc, "Altered Everything Forever", is another 18 tracks and 70+ minutes -- with more new cuts and remixes. It's all in a similar vein, with deftly-programmed electronic rhythms and intensely detailed sequencers and samples. A solid (if somewhat indulgent) genre release, and squarely-aimed at Mentallo's rabid 90s-era fanbase, "Music From The Eather" is a winner.

Posted by Goatsden at 8:01 PM No comments: 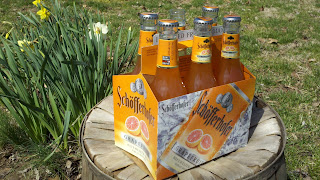 I've never been much a fan of Summer shandies or radlers. Some of the more mainstream beer/fruit juice mixes seem far too artificial and sweet for my more "mature" (read: hop-centric) taste buds! Hah! But this German import mixes 50% real hefeweizen with 50% "natural grapefruit flavors". And it doesn't suck.

Schofferhofer Grapefruit-Hefeweizen Mix is easy to drink, and at a meager 2.5% ABV, you could easily down a sixer without even getting tipsy. Maybe. Anyway, I'm not sure how easy this beer is to find, or what states it's distributed in, but it does retail for $8.99-$9.99. Ask your local retailer if their distributors can get it. So, how about that review?

Pours a weird orange (like a Fanta or Crush), but it's an impenetrably cloudy and opaque -- like a proper hefeweizen! No lace here. Nose is subtle grapefruit, with some sharp wheat character. Actually not bad. Taste is sweet grapefruit and a hint of wheat sharpness. Actually, this isn't too far from a citrus soft drink, with an infusion of beer. Call it a radler or a shandy or whatever, but this drinks very easily. And at a lowly 2.5% ABV, this is perfect for Summer yardwork. Enjoyable!

Official Schofferhofer.de site
Posted by Goatsden at 3:59 PM No comments: