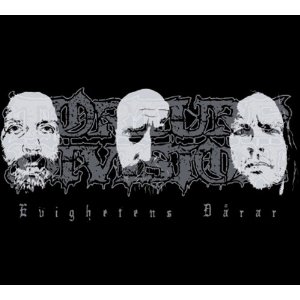 Compiling 3 of the Swedish band's 2009-2010 demos, this 10-song, 28-minute set shows the Swedish metal band's ferocity amiably, without question. The first thing I noticed here is the clear, punchy sound. Turns out this is mixed and mastered by the legendary Dan Swano, so that explains part of it.

Musically, though, Torture Division bring an ultra-heavy death/power metal sound on their own. The opener, "Traumatic Inhuman Severance" is violent and potent. "Eld Och Plagor" mixes it up with an evil atmospheric breakdown before returning with another fearsome onslaught of machine-like tension and menace. "Righteous Fore Ensemble" is pure death metal, but with such great production, I can't help but appreciate the precision and, though I hate to use the word, brutality. Simply said, this is a superlative recording.

Besides making some tight and devastating metal, the band is known for "giving" their music away. They retain all rights to the music, and invite anyone to download (name your own price) and reproduce for your friends. So, in effect, Torture Division is a non-profit band. Support these guys as they smoke.

Torture Division site
Posted by Goatsden at 9:07 AM No comments: 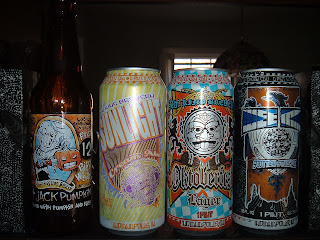 Here are some reviews of some new local (Indianapolis, Indiana) brews, from some rising craft brewers. As ever, the scale runs from 1 (terrible) to 5 (terrific). That said, a 3 or 3.5 are solid and enjoyable brews. Everything here is perfectly good, and I trust both of these brewers to continue making top-tier beer for years to come. If you're near Indy, check in and have some pints! Prost!

Flat 12 Bierwerks are really new to bottling their beers, but they've produced nothing less than excellent so far. Here's a limited Fall seasonal.

Pours all suds! Gradually, as it all subsides, lace is pretty spotty and erratic. Color is cloudy light amber. Nose is spicy, with plenty of nutmeg, allspice, and cinnamon. Inviting! When the overcarbonation settles down, the flavor is more of this spice and plenty of hoppy bitterness. The actual pumpkin is subdued and the body is light.
Gets better as it warms, and more character is brought out.

Still, as it is, not among my favorite pumpkin brews.

Sun King has garnered serious accolades in recent years, and their pint cans are sort of a trademark. I've had their superb Osiris Pale Ale a few times, but here are their other main-line pints, sampled and reviewed.

Pours a semi-cloudy golden from the pint can, with thick carbonation, but no lace. Nose is pleasantly light, grainy, and malty, with a hint of buttered sweet corn. That's not to say it's bad, though. Actually it's pretty refreshing. Taste is, expectedly, light and creamy. This one is sooo smooth and malty, but very drinkable and, as the can imparts, approachable. Sunlight Cream Ale wouldn't turn away lifetime macro drinkers, but has plenty of easy-going flavor for craft nerds, too.

A solid and totally session-worthy brew here, not too complex, but smooth and well-crafted to style.

Pours from the pint can a clean, clear amber, with substantial head. Thick 2-finger lace. Lovely! Nose is malty grains, even earthy. Nice. Flavor is malty and sweet up front, with a slowly-developing citrus hops accent toward the finish.

Totally solid, but I still prefer their Osiris Pale Ale.

This Scottish-style ale pours from the pint can a ruby-amber in color. Virtually no lace here. Aroma is malty sweet. I get a toasty toffee kind of vibe here. Not bad. Taste is mild and sweetly malty, with more toffee tones and some nuttiness.

Not a very compex flavor profile here, but very drinkable and session-worthy.

Posted by Goatsden at 8:57 AM No comments: 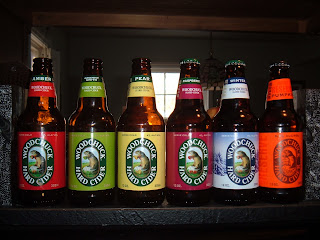 With the cider world expanding rapidly and competing, to some extent, with the beer market, it's high time I look closer at this historic and delicious beverage.

In America, Woodchuck Cidery, based in Middlebury, Vermont, dominates the marketplace, with a variety of different cider varietals, limited editions, and seasonals. So, with that  in mind, I searched out a wide array of Woodchuck's ciders and present my tastings to you.

This is the original, flagship cider from pioneering Woodchuck cidery, and a favorite with good reason. It's slightly spiced, perfecty balanced, and quite delicious.

Needless to say, this nearly-clear-complected cider is a more tart, sour apple variety, harnessing the attributes of the green apple. Still, this one's nicely balanced and quite enjoyable.

This one strikes a different taste, as could be expected. Light (at only 4% ABV), this tasty "cider" variation uses sweet pear juice, as opposed to apple. I love a good pear, and this one's perfectly enjoyable.

This light and pale "cider" is another subtle variation on the cider theme. Happily, I can report that the raspberry taste here has no weird or artificial aftertastes (as do many fruit beers I've had). Solid.

This seasonal blend is a marvelous mix of French and American oak (I assume it's aged in oak barrels?) and Woodchuck's trademark well-balanced cider. Delicious, crisp, and complex.

The strongest (at 6.9%) of the regular Woodchuck line, this seasonal is really limited (produced for only 2.5 hours on the bottling line), and really delicious. This one adds, naturally, a sweet and mellow pumpkin infusion to the cider blend. What results is a warm, Fall-type flavor that's not too sweet or spicy. There's no hint of the nutmeg/cinnamon/allspice that pumpkin beers often exhibit, either, so if those bother you, don't hesitate to try this lovely and unique cider.

For more information on Woodchuck, their history, and cider types, visit: 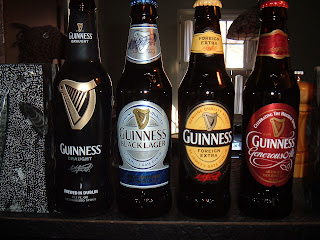 Guinness is the lynchpin of Irish beer history, with a legacy that goes back hundreds of years. It's also a staple of the whole "stout" style, being likely among the first "dark beers" many of us ever enjoyed. Furthermore, any visit to Ireland begs of the enjoyment of some pints of Guinness. It's that much a part of the culture.

This season, Guinness released a rare seasonal "mix pack" here in America, including 4 of their beers. Here's my breakdown. Note that the review of the Black Lager is re-printed from previous tasting notes. Keep in mind that scores run from 1 (terrible) to 5 (world class). As always, enjoy craft beer and avoid corporate swill!

This standard stout is, for all intents, the flagship beer for Guinness in the states. That said, it's also rather weak by comparison.

The bottle advises to drink in bottle with "rocket widget" inside (for a true "draught experience", so I sipped a little before pouring). Deep-dark black appearance. Very fizzy, creamy head that keeps on bubbling. Malty mild chocolate aroma. Flavor smooth and creamy, with bittersweet cocoa character and herbal undertone. Very thin and watery of body.

Still, this remains smooth and drinkable, if lacking in complexity.

Black Lager is a relatively new addition to the Guinness lineup, and bridges the gap between their traditional stouts and lighter, American-style lagers. It's fair enough, but not a favorite.

Deep and black (as Guinness well should be), this new brew leaves a large but erratic lace on my pint glass. Nose is grainy like most lagers, barely hinting at the flavors to follow. Tastes mildly burnt/roasty - but still light on the body, as opposed to the usual heavier stout.

Very enjoyable, and though I'd rather sip on a warmed Guinness Foreign Extra Stout, this one hit the spot.

This is another semi-recent addition to the lineup, and is a heavier, stronger version of the usual stout. With a deeper 7.5% ABV, this is among the finer, sturdier drinks in the Guinness "portfolio". I like this one most of all.

Nicely black, with a huge head of tan bubbles. Thin web of spider-web lace. Impressive. Nose seems creamy lactic sweet, even mildly astringent somehow. Not great. Taste is strong, even a little bitter, with flavors of burnt barley and crisp hops present, too. Not your usual Guinness, though it does retain some of the creamy body of the usual Guinness.

This is a sturdy, strong, and bitter ale that's unique and well-done. I'll be revisiting in the future.

Finally, this limited brew is included only within the Guinness seasonal mix-packs. It's a novelty, but I won't miss it.

Clean ruby-brown upon pouring, with a decent head of off-white foam. Lace is nice but erratic. Nose is roasty barley, with a sweet malty tone -- definitely grains, but with almost a hint of fruit somehow. Not bad. Taste is similar -- roasty and flavorful, yet light in body. There's a definite tinge of bittering hops within the mix, but the roasty malts are most prevalent.

This is a rich and easy-drinking ale, not great but certainly a nice change from the usual Guinness.

Posted by Goatsden at 5:45 AM No comments: 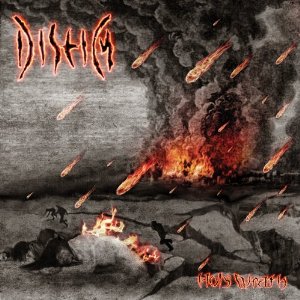 8 songs and 32 minutes of down-tuned doom/death metal, "Holy Wrath" is the debut from this Latvian band, and it works well. Opening with the mid-tempo groove metal of "Black", the band then lapses into more stereotypical, grumbly, rumbly death metal on later tracks. "Sinner" evidences this, being fairly silly death metal, It is simple and to-to-point, so that's not necessarily a bad thing. "Insanity" fares better, with a rolling thunder rhythm and solid fretwork alongside the cookie monster vomit vocals.

No pretensions here, Diseim are a competent metal act capable of several directions, though they are clearly representing the death metal genre on this release. Here's to them branching out a bit more next time. 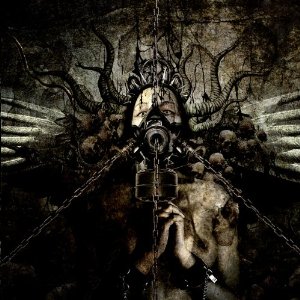 Bane was a black/death metal band from Serbia, and this 2010 debut album showed great promise. A principal member moved overseas to Canada after a followup 2012 album, and although he hopes to reform the band, it's still dicey whether Bane will continue. Which is a shame, as this is certainly a strong offering.

Separated into three distinct "movements" (Chaos, Darkness, and Emptiness), the Chaos part of the album opens with a symphonic intro before diving headfirst into a strong black/death metal assault ("The True Insomnia"), using alternately screeching/grumbled vocals and a thick, heavy, and propulsive rhythm section. "Pandemonium" is much more technically precise and well-produced than most black metal, though still most certainly referencing it.

Going from the frenzied black & death precision of Chaos, to the introspective, almost prog/doomy Darkness stage, Bane seem to lose a bit of steam on "Lost Shadows" and "Plague Upon Yourself", both of which include melodic acoustic interludes that seem quite out of place. They do provide a fair respite from the typical assault, though.

Emptiness includes the clean and structured "Inherited Infection" (which ends with an almost medieval melodic guitar), and the slower, doomier "The Haunting Presence". "Dysthymia" is another mellow, orchestral piece to (almost) close it out, before the "bonus track", a cover of Dark Funeral's "The Dawn No More Rises" rears it's head in a killer fashion.

The production works well for bane, providing enough crunchy highs and lows and clean mid-range. And the wide array of sounds and styles here are a nice change-up, proving Bane to be a diverse and mature black/death act capable of much more. Superb!

Posted by Goatsden at 4:52 AM No comments: