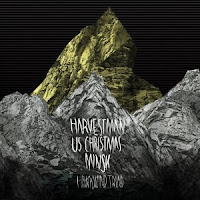 Perhaps unjustly ignored here in the states, longtime sci-fi space-rock group Hawkwind have inspired literally hundreds of willing space-travelers throughout their 40+ year journey on this planet. And, they gave Lemmy Kilmeister (later of metal legends Motorhead) his beginning. That aside, this is a tribute album, with 3 present-day psychedelic / post-rock / intelligent metal acts performing their favorite classic Hawkwind cuts. What's it sound like? Well, it's a respectful and reverential set, with faithful covers of freak-out heavy rockers like "Masters Of The Universe" and "Orgone Accumulator", as interpreted by Appalachian psyche-blues act U.S. Christmas. Neurosis frontman Steve Von Till (as Harvestman) contributes 4 tracks, with his gruff, weathered vocals and stark arrangements, but I find this material less energetic than his bewilderingly intense Harvestman LP of last year. Minsk's lumbering and majestic 12-minute behemoth "Assault And Battery/The Golden Void", however, shows that Hawkwind may've have been the Pink Floyd of the heavy music scene, and this may be the highlight for me. U.S. Christmas returns with the deep trippers "Psychedelic Warlords" and the frenzied "You Shouldn't Do That", both complete with driving mantric riffs and far-out synth scribbles. I dare you to listen to this and not commit heinous acts of synesthesia. A powerful and spaced-out set of heavy rockers, here. Monumental. (Neurot Recordings)

Minsk site
Minskspace
Posted by Goatsden at 9:13 AM No comments: