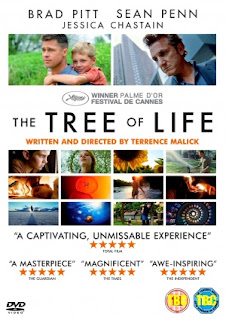 Abstracted, metaphysical, metaphorical, non-sequential, and poetic, this masterpiece from the legendary director is a beautiful and harrowing look at life, growth, spirituality, and love as seen through the eyes of a young boy named Jack. We follow Jack from conception to adulthood, and as a grown-up (played by the inimitable Sean Penn) he re-traces his steps and mis-steps in life and his conflicted relationship with his troubled father (portrayed by Brad Pitt).

Cinematically rich and colorful, Malick's kaleidoscopic lens captures not only a realistic depiction of boyhood in the 50s, but also a cosmic evolution/genesis of life itself, often in relation to Jack's own birth and growth. "The Tree Of Life" is a bittersweet film with an understated subtlety, relating the pain of growing older and wiser with what some may see as a pretentious and heavy-handed philosophical angle. i prefer to see this one simply as a truly artful fllm that inspires and provokes.

Either way, this decidedly non-commercial work is a visually stunning homage to the splendor (and sorrow) of life itself, and Malick's carefully-crafted cinematography is both gorgeous and memorable. Highest marks! (Fox Searchlight)

Posted by Goatsden at 3:50 PM No comments: 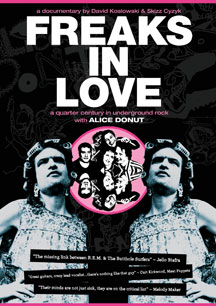 As well, there's tons of classic live footage and intimate behind-the-scenes clips, illustrating Alice Donut's fearsome and wild post-punk sounds. Biafra sums it up well with a cover quote: "The missing link between R.E.M. and the Butthole Surfers".

Though Alice Donut never quite reached the heights of some of their indie peers in the 80s or 90s, they remain an iconic symbol of true independent spirit, and although the members have moved on in life, they still, on occasion, regroup to play shows and even record. The "scene" may be vastly different, but Alice Donut remain legends. "Freaks In Love" is a superb, well-done, and enlightening film for fans, or anyone interested in the legacy of a sometimes-forgotten but influential post-punk band. (MVD Visual)

Alice Donut site
Posted by Goatsden at 3:27 PM No comments:

This rare and long out-of-print live album documents the band's 1986 Reading Festival appearance (and three cuts from a 1985 gig in London, oddly). Though it's certainly not essential, it is a curiosity for serious fans.

The "Brighter Than A Thousand Suns" era, which this disc captures, saw the band in the middle of it's much-berated bloated synth-pop faze, with excessive keyboards dominating the mix (sometimes at the expense of Geordie's guitars), and Jaz's melodic vocals becoming more prominent. Old-time punk fans screamed "sellout" -- and that didn't seem too far from the truth. The band's smoothed-out studio sound isn't quite as evident here, fortunately, as the Joke do parade out classics like "Requiem", "Complications", "Wardance", and "Tension". On the other hand, we may never again hear a live version of "Sanity", and tracks like "Twilight Of The Mortals", "Chessboards", or "Love Of The Masses" are hardly live staples, either.

So, to sum this one up, it's a decent period piece for collectors, but anyone else is urged to avoid this one, and pick up more representative live KJ albums like "Ha!" or the massive 4xCD set, "The Gathering 2008", either of which possess prime Killing Joke wallop and vitriol. (Windsong International) 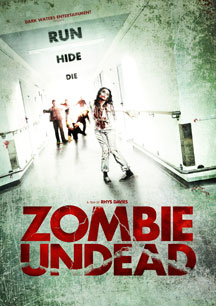 It must be said. Zombie flicks are a dime a dozen. With the success of "28 Days Later", "The Walking Dead", and "Shaun Of The Dead", there's been an alarming trend of zombie this and zombie that. Enough! This 2010 UK indie film is a prime suspect, being as generic, aimless, and pedestrian as they come.

You already know what to expect -- a terrorist attack leaves a wake of zombie plague in downtown Leicester, England. It quickly spreads to the countryside, where our heroine, Sarah (played by the positively dull Ruth King) meets up with Jay (played by writer/co-editor Kris Tearse). They walk themselves in circles, being accosted by zombies, with little to say. Bad dialogue, droll characters, no direction...I could go on. On a more positive note, there are some neat and gory corpse-munching scenes, but they are too few. Avoid this one, as it's just plain bad. (Hive Films via MVD Visual)

Hive Films site
Posted by Goatsden at 1:32 PM No comments: 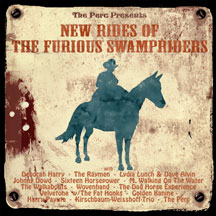 A curious compilation here, arranged by German label Sireena Records, and the 4th in a series. Based on the inspiration of "swamp rock" and the Gun Club, the artists here pay homage to this influence, and it's pretty well a fun listen through and through.

Notables included here are Deborah Harry (with Chris Stein and Jeffrey Lee Pierce), Sixteen Horsepower, Lydia Lunch (with Dave Alvin and Kid Congo Powers), the Raymen, the Walkabouts, and a weird folky cover of Depeche Mode's "Enjoy The Silence" by German group M.Walking On The Water. A handful of mostly German groups round out the 14-track set, and, surprisingly, it's a pretty well cohesive set of darkly soulful swamp blues rockers. Jeffrey Lee Pierce would be proud of his "children" and friends here. (Sireena Records)
Posted by Goatsden at 1:23 PM No comments: 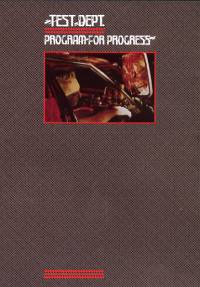 Subtitled "Video Work [82-84]", this classic 1984 film isn't a live document, but more a visual accompaniment for Test Dept's influential, legendary, and percussive industrial music. Initially in "Cold Witness", we see a man rooting around an abandoned post-apocalyptic factory. It's an almost fetishistic video of rusted-out metal machinery and factory pollution set to an assault of grinding noise that crescendos into a paranoid overload. The following video ("Shockwork") depicts Test Dept members in a proto-militaristic style, again with plenty of shots of industrial buildings, steel & iron, junkyards, and crushed cars. The following 6 tracks (including the frenetic "Compulsion" and "Total State Machine") fall in line with this type of scenario.

Test Dept never quite achieved the same level of notoriety as their German counterparts Einsturzende Neubauten. However, their early metal-percussion extremity did inspire a generation of post-industrial dance bands, particularly acts like Ministry, Skinny Puppy, and Front Line Assembly. And though this whole scene may seem quaint and well played-out now, Test Dept were true innovators, and this  DVD is a must-see for true industrial music historians. (Cherry Red)

Posted by Goatsden at 7:21 AM No comments: 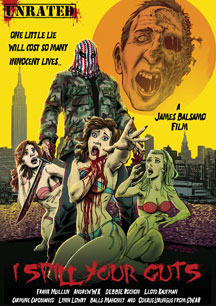 This ultra-micro indie trash film follows closely in the footsteps of director Balsamo's previous film, "Hack Job", as it also features celebrity cameos from Dave Brockie (aka Oderus Urungus of Gwar), Lloyd Kaufman (of Troma), and Debbie Rochon. As well, we get Andrew W.K. making a brief and bloody appearance. Anyway, in "I Spill Your Guts", a greedy military veteran double-crosses his war-hero friend, leaves him for dead, and steals his glory. The friend exacts his revenge by becoming a sort of undead serial killer.

Viewers will undoubtedly be pleased to see plenty of bouncy (usually pierced-nippled) breasts, limb hackings, and gallons of gore. The soundtrack is jam-packed with death metal and industrial sounds, almost to excess. Sure, the acting, dialogue, and storyline are all pretty forgettable and awful, but this is a fun film and made with tongue thoroughly in cheek. Maybe I lost interest, but many fans of sleazy Troma-style cinema will find something of interest in "I Spill Your Guts". (Acid Bath Productions)
Posted by Goatsden at 10:56 PM No comments: 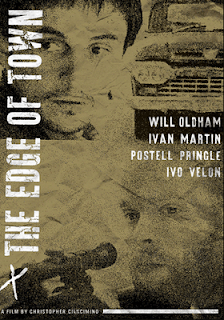 This 27-minute short film from 2007 depicts an intersection of characters in a small town, including a hunter, an estranged husband, a man who's lost his cat, a cop, and his daughter. There's an accidental death to throw things into a bit of a loop, too. No spoilers here, but suffice to say, everyone's connected.

Ciancimino's first film, this one shows a great talent at story-writing, dialogue, and cinematography. "The Edge Of Town" is a tremendous beginning for this filmmaker. Also notable is an appearance by Will Oldham as the hunter.

The Edge Of Town
Posted by Goatsden at 10:52 PM No comments: