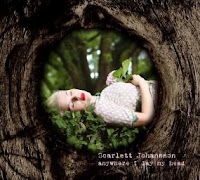 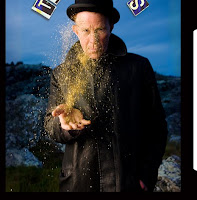 It's acknowledged by anyone with an ounce of sentience that Tom Waits is a goddamned genius. One of the greatest songwriters this side of Dylan himself, some would say (like me). And anyone who thinks Waits' distinctively, umm, 'unmusical' delivery mars his songs, well, you, kind sir, are unequivocally wrong. Hottie-of-the-week actress Scarlett Johansson seems to think she can re-invigorate and clean up Waits' tunes and present them to a new audience. This, her debut, contains 10 (count 'em) TEN covers of the masters' tunes (and one lowly original). It's all wrapped up in fine production from TV On The Radio's Dave Sitek, and boasts a couple of guest apps from David Bowie himself. Esteemed company, yes. But how's it sound? Well, it's nicely gauzy and shoegazey. Kind of floaty and narcotic. I won't talk about what everyone else says, about Johansson's lack of range. Bloody 'ell, Waits' own vocals aren't Mr. Tuneful, either. The question here is, does she add anything to these songs? I say no. Her re-interpretations are basically pretty window dressing. The wonderfully gritty, everyman delivery of Waits is here tossed into a fuzzy, slo-mo dreamscape. It's not terrible (except for the plain-awful synthpop version of 'I Don't Wanna Grow Up'), but it's not necessary, either. You're better investing in a superb Waits collection of originals like 'Beautiful Maladies' or the stupendous 'Orphans'. You'll be happier in the long run. You'll just have to trust me on this one. (Atco)
Not a Scarlett Johansson site
Another not a Scarlett Johansson site
Posted by Goatsden at 12:31 AM No comments: 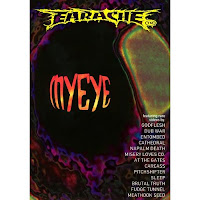 This reissue of an old VHS tape from venerable UK metal label Earache Records includes some righteously heavy stuff, and plenty of forgettable late-80's/early 90's bits as well. Opening with the best is always a wise choice, and Godflesh's 'Crush My Soul' clip (which I'd somehow never seen before) is nicely disturbing, and includes a cameo from none other than Bob Flanagan (best known for his meat-grinding appearance in Nine Inch Nails 'Happiness In Slavery' video, and for the Re/Search book about his masochistic ways). Dub War (who always bored me) turn in a bleah Bad Brains-meets-nu-metal 'Strike It', and Entombed (who used to be good) present their sell-out clip for the tragically sucky 'Wolverine Blues'. Pretty stupid then, and embarrassing now. Cathedral's early doom metal ages reasonably well, and their 'Hopkins (Witchfinder General)' references the mighty Vincent Price film, and includes (likely unlicensed) an 'appearance' by Price himself. Vincent Price is a god, and thus this clip is quite cool (even if the dancing metal babe cheeses me out). The unjustly-ignored Misery Loves Co. are represented by 'My Mind Still Speaks', an industrial metal pounder that outdid a lot of similar stuff of the era. At The Gates (who I have never heard much of) are memorable, with their Carcass-like grinder 'Blinded By Fear', and Carcass themselves bring the catchy 'No Love Lost', which is still pretty ace, if you ask me. Pitchshifter's 'Underachiever' is a nice bit of cyber-industrial metal as they did best, Sleep's 'Dragonaut' is a Sabbath-a-rama, and Brutal Truth are fearsome with 'Godplayer'. Other clips by Fudge Tunnel (awesome band, lame clip) and Napalm Death side-project Meathook Seed are forgettable. A nice collection of heavy sounds, dated perhaps in spots, but solid nonetheless. (Earache/MVD Visual)
Posted by Goatsden at 6:10 PM No comments: 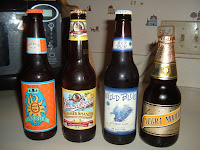 BELL'S OBERON ALE
Comstock, MI, USA
Nicely-hopped for a wheat beer, but lacking any fruity resonance. Definitely a decent brew here, and a strong showing for Bell's, who I think are kinda hit-n-miss with their beers. Solid and drinkable.

LEINENKUGEL'S SUMMER SHANDY
Chippewa Falls, WI, USA
Light and simple, and definitely a Summer-style beer. Very light and lemonade-like in appearance, too. No complexity in flavor, and this one tastes like someone poured some sugary lemonade into a light beer. No, thanks.

BLUE DAWG - WILD BLUE BLUEBERRY LAGER
Baldwinsville, NY, USA
Yummy deep-blue appearance, and an aroma of fresh, tasty blueberries. Looking forward to this one already! But the flavor is what's important, and this one comes across like an alcoholic grape soda. Weird and un-beerlike. And not very good at all.

NEGRA MODELO DARK
Mexico
A decent, if unremarkable beer, mild, malty, and really sort of bland. Dark caramel appearance. Ideal for spicier foods, though (like Mexican), though, so this one gets by.
Posted by Goatsden at 4:40 PM No comments: 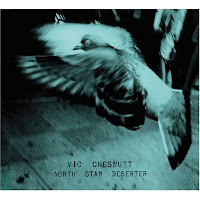 I was never very familiar with Chesnutt's highly-regarded back catalogue, but this new release on Canadian label Constellation is a superb collection of darkly introspective and atmospheric folk tunes, with musical contributions from Thee Silver Mt. Zion Orchestra and associates. Everything here is moody and literate, highlighted by the epic 'Debriefing', which begins as a textural collection of radio transmissions and 'found' sounds that erupt into a powerful and driving noise-infested rock song that further frames Chesnutt's desperately poetic words. 'You Are Never Alone' is another memorable cut, detailing a world-weary but uplifting set of circumstances that one can ordeal, with a lovely chorus of 'keep on keepin' on'. I can't help but think that this is precisely what A Silver Mt. Zion needs, a vocalist/songwriter who can express with great feeling the sorrow and fragility of life in this world, but with a finely-tuned spiritual side that doesn't drag down, but inspires. Chesnutt is awesome here, gelling his rootsy and personal words with the group's sometimes minimalist, othertimes percussive and overloaded post-folk noise. Transcendent and beautiful work. (Constellation) 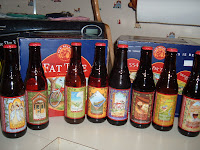 Once upon a time there was a boy. And this boy really loved going to concerts. One night, he found himself (and his brother) in Saint Louie, at one of these shows. The boys ordered a beer that they hadn't had before. It was Belgian-style. And lo, this beer was deemed Fat Tire. The beer was godlike. The show rocked hard, too. It was an emotional experience, with the hops and malts and intense flavors mixing with the emotional and intense music. And thus, a passion for Fat Tire was born. This 'Fat Tire' was not available locally, so the boys dreamed of once again having such a beer. Years passed, and future trips to St. Louis proved fruitful in drinking more of this lovely, sweet nectar of brews. Friends would, upon special request, import these beers via long, arduous roadtrips. And the beer was still good. The stuff of dreams, even.

Then, it was discovered that this beer was not Belgian at all, but it was produced in Colorado by New Belgium Breweries. And said brew wasn't alone. There were other beers in the family. Other friends (some well-entrenched in beer-lore and knowledge - talking about you John) mentioned other types of New Belgium beers that dwarfed the mighty Fat Tire. And that these beers may be distributed to the farther Midwest next year or so, but that wasn't soon enough. It was agreed that the Radiohead concert was a good excuse to seek out more beer, and hopefully not empty the bank account too deeply.

And so it was, this past week, that my beautiful Cori and I located a late-night grocer (Schnuck's is the best!) in St. Louis and loaded up a cartful of New Belgium products. And they were on sale! $7.49 a 6-pack! Actually, it was almost embarrassing - $80 on beer, with no other groceries or household supplies to mask the evident alcoholicism. But it had to be done. Wow. Such a variety of new beers to experience and enjoy, and yet others still never seen. Indeed, the future looks bright, from this angle.

I have now tried maybe 4 or 5 types of New Belgium beers, which are created at the first wind-powered brewery in the US, and by a company that is environmentally-conscious and renewable-resource-minded. But the bottom line is, the beers are damned good! Complex and refreshing, the Abbey Belgian-style ale is a solid choice, being a Belgian Trappist style, with actual Belgian yeast strains and a crisp, malty presence. Fat Tire is a good choice for the beginner, being relatively light but with a nice floral bouquet. Trippel is yummy and rich, while others I've yet to taste will be remarked upon here later. Suffice to say, New Belgium is a superb brewery making some waves with folks like us at Goatsden HQ. If you're located in one of the more Western-oriented US states, you are fortunate to have access to these fine beers. And if you travel that way, be sure to find some for yourself. Especially as I may not share mine! Hah!

New Belgium
Posted by Goatsden at 5:49 PM No comments: