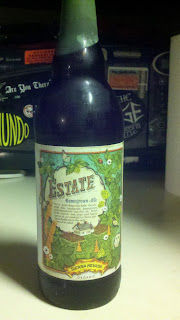 A 6.7%ABV IPA, Sierra Nevada's Estate was a limited brewing that was revolutionary in that it utilized only ingredients (mostly organic, too) grown on Sierra Nevada's estate locally in Chico.

Clean light amber in color, with a big, thick head of off-white foam. Gorgeous lace. Nose is moist, floral, pine hoppiness. A superb start! Taste is sharp and bold, with spicy and peppery hops and a thick malt presence underlying it, and residing at the finish.

Very delicious, and a treat for IPA fans. Here's to hoping there's another harvest next year!

Sierra Nevada
Posted by Goatsden at 9:23 AM No comments: 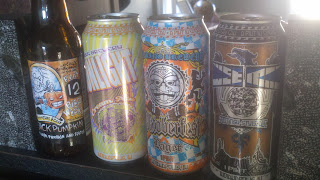 Here we have several brews from local Indiana brewers, and some fine work, indeed! Both Flat 12 Bierwerks and Sun King Brewing are based in Indianapolis, and though distribution seems limited on both counts, they can be found into Southern Indiana, for sure, and are all worthy of checking out. Remember that beer ratings run from 1 (awful) to 5 (awesome). Anything over a 3.5 is a winner, so taste and prost!

Flat 12 has produced some solid beers, though this one didn't impress me much.

Pours all suds! Gradually, as it all subsides, lace is pretty spotty and erratic. Color is cloudy light amber. Nose is spicy, with plenty of nutmeg, allspice, and cinnamon. Inviting! When the overcarbonation settles down, the flavor is more of this spice and plenty of hoppy bitterness. The actual pumpkin is subdued and the body is light. Gets better as it warms, and more character is brought out.

Still, as it is, not among my favorite pumpkin brews.

Sun King is a respected craft brewer, and their larger offerings aren't bottled, but canned in cool pint cans. Their "light" beer isn't a kolsch or lager, but a cream ale!

Pours a semi-cloudy golden from the pint can, with thick carbonation, but no lace.
Nose is pleasantly light, grainy, and malty, with a hint of buttered sweet corn. That's not to say it's bad, though. Actually it's pretty refreshing. Taste is, expectedly, light and creamy. This one is sooo smooth and malty, but very drinkable and, as the can imparts, approachable. Sunlight Cream Ale wouldn't turn away lifetime macro drinkers, but has plenty of easy-going flavor for craft nerds, too.

A solid and totally session-worthy brew here, not too complex, but smooth and well-crafted to style.

Pours from the pint can a clean, clear amber, with substantial head. Thick 2-finger lace. Lovely! Nose is malty grains, even earthy. Nice. Flavor is malty and sweet up front, with a slowly-developing citrus hops accent toward the finish.

Totally solid, but I still prefer their Osiris Pale Ale.

This Scottish-style ale pours from the pint can a ruby-amber in color. Virtually no lace here. Aroma is malty sweet. I get a toasty toffee kind of vibe here. Not bad. Taste is mild and sweetly malty, with more toffee tones and some nuttiness.

Not a very compex flavor profile here, but very drinkable and session-worthy.
Posted by Goatsden at 6:51 AM No comments: