Legendary Boys Next Door & Birthday Party guitarist Rowland S. Howard, also widely-known for his work with These Immortal Souls, Crime & The City Solution, Lydia Lunch, and solo, has passed away today at the age of 50 from liver cancer.

Howard's unusual swampy-blues-noise guitar work defined the Birthday Party as much as Nick Cave's histrionic wails did, and his loose, cutthroat style and trademark junkie-chic swagger was influential on a burgeoning generation of post-punk bands, yesterday and today.

Rowland was a one-of-a-kind guitarist who made a tremendous contribution to the world of original rock music, and his presence will be missed but never forgotten.

Posted by Goatsden at 3:07 PM No comments: 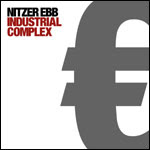 In the roughly 15 years since the last new Ebb material, Nitzer Ebb's instrumentalist Bon Harris has spent time programming for bands like Smashing Pumpkins and Marilyn Manson, while vocalist Douglas McCarthy has worked with Ebb-inspired dance producer Terrence Fixmer, as well as Alan Wilder's electro-blues project, Recoil. But these influential English electro-dance-punks reunite with the impressively strong "Industrial Complex", and they do a right good job reclaiming the harsh sequencer-driven sound of their earliest work (a la "That Total Age"), especially on the energetic opener, "Promises" (which made it's debut on the "NCIS" soundtrack). The sloganeering and authoritarian ranting of their old days is gone, though, replaced by more developed songwriting and production. There are also softer electro ballads like "Going Away", which reminds of (old friends, tourmates, and collaborators) Depeche Mode. No coincidence that Depeche's Martin Gore himself guests on "Once You Say", which bears a similarity to Mode's "I Feel You" a wee bit. But that's not to say this is a mope-fest by any means. Cuts like "Hit You Back" are more rock-oriented, echoing their later work on albums like "Ebbhead". And the thunderous "Payroll", originally heard on the "Saw IV" soundtrack, is a welcomed injection of aggressive electronics and McCarthy's half-rap-shouted vocals. "I Don't Know You" is a retro-edged bit of synth-driven hypnoticism that shows Ebb's DAF-meets-Die Krupps roots more than amicably. "My Door Is Open" continues this trend, and is easily among the duo's more intense offerings since 1991's "Godhead". "Kiss Kiss Bang Bang" is another stomper that could be wicked on a dancefloor, but probably rocks too hard for most club-goers. It all ends on a lighter note with "Traveling", which is a more song-based piece that's as close to a pop song as this lot goes. Surprisingly good, sturdy, and potent work from a group that has successfully resurrected itself from the ashes. (Alfa Matrix)

Nitzer Ebb web
Posted by Goatsden at 1:23 PM No comments: 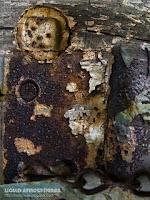 The world lost a groundbreaking and inspiring filmmaker and visual artist the month. Mark Nugent, who was known for his short films that accompanied his friends in musical groups like Download, Dead Voices On Air, Coil, and Beehatch, as well as for his still images (some done in recent times in collaboration with our mutual friend Aaron Campbell), passed away unexpectedly this month. Here is a series of links to bring Mark's strange and often otherworldly visuals to you. Image facing: "Granular Rust", by Mark Nugent and Aaron Campbell, from their "Liquid Atmospheres" page (link below).

Yes, as in Christopher Walken, these not-necessarily-serious Bay Area madmen readily admit. But that doesn't mean they aren't serious about making a supremely heavy and sometimes schizophrenic metal racket on this, their self-released debut album. This monster comes out of the box screaming and punching, with a hybrid metal/thrash/hardcore attack that, by the third track ("Running Out Of Time") manages to rattles the house's foundation nicely. The bass is immensely thick, metallic, and grinding, while the drums are all over the place, pummeling at every chance. The dual guitarists exhibit elements of classic metal as well as other metallic subgenres that often differ from track to track. They clearly know their stuff, and it shows. "Thunder Paws" is earth-plowing Sabbath-meets-thrash with a little bit of bluesy vibe seeping in. Effective and monolithic. "Bitter Red" is a weird amalgamation of punk with weird almost jazz affectations. "The Bridge" approaches a solemn doom metal motif, and does so most convincingly. Pretty rad stuff, with a nicely odd and schizophrenic genre-mashing that's refreshing and always surprising. These guys kick massively, and have something to offer for fans of any heavy and metallic style. (Walken)
Posted by Goatsden at 10:07 AM No comments: