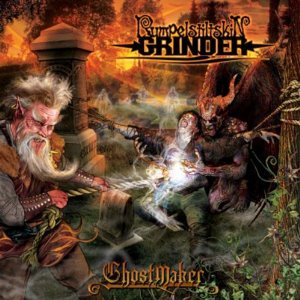 The third album from this Pennsylvania band consists of 12 tracks and 45 minutes that instantly rage with an assault of death/grind riff and pummel. But these guys have a sense of humor about things, which is always refreshing. That's not to say that tracks like "Get Out Of My Grave/Gigantic Graveyard" or "Nightworms" are light listening, though. Quite the contrary.

The dual guitar pyrotechnics of Ryan Moll and Matt Moore are thick and tight, and the rhythm section follows suit. Moore's vocals are of the throat-throttling death metal variety, and Moll's solos (as in "Run Through The Bastards") are impeccable. Production is deep, making "Ghostmaker" a superb album in every respect. Thumbs up here. (Candlelight Records)

"The Roots Of Drone" 2xCD 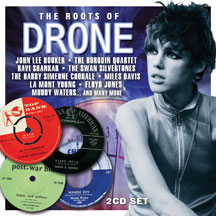 This compilation does an admirable job collecting samples of some of what could be loosely considered "drone" music's history, dating back to 1926. Of course, it could be debated that drone-based music goes back centuries (and indeed it does), but as for modern music, Chrome Dreams (who are usually busy producing unauthorized DVD biographies of pop and rock stars) has done a fine job.

My sole complaints with "The Roots Of Drone" are in the liner notes, which are, sadly, a tad brief, and the packaging design, which looks far too "modern", flashy and inappropriate for the subtle and historical content of the music. (Chrome Dreams)
Posted by Goatsden at 10:01 AM No comments: In honor of the Canadian National Parks centennial, this fascinating DVD is a compilation and collaboration between 13 filmmakers and 39 independent musicians. Given 5 day visits to some of Canada's most scenic and majestic parks, the filmmakers create their own visual interpretations of the parks' natural beauty and grandeur, while the musicians performed songs/soundtracks alongside them.

The results are, as can be expected, uneven. At their finest, these films are meditative and artful, capturing the flora and fauna in its own rugged purity. There are lovely and intimate portraits of wildlife and forests, tundra and treelines, Arctic snow and glaciers, waterfalls and shorelines, and tons more. The directors put their own individual spin on their surroundings, and some end up like hallucinogenic mind-trips, while others are more straightforward and documentary.

The music, which sometimes seems to get in the way of the visuals, is primarily of the loose, slackerly indie rock persuasion, with detours for some tribal Native American sounds, as well as some cool proto-metal from Melissa Auf Der Maur (who is central to a particularly memorable film).

All told, this is a unique and creative way to celebrate the natural heritage and splendor of Canada's national parks system. And even if some films (or music) may not be to your liking, there are plenty of amazing visuals here to inspire and aspire to. (Primitive Entertainment)

Posted by Goatsden at 9:57 AM No comments: 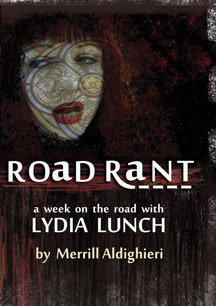 Lydia is unquestionably one of subversive rock's first ladies, having led no-wave progenitors Teenage Jesus And The Jerks and working alongside such names as Einsturzende Neubauten, Foetus, Swans, Sonic Youth, and the Birthday Party. She's done extensive work in music, film, and print, and deserves "legendary" status, for sure. This is a documentary of her 2007 French tour to promote her book, "Paradoxia", and it's a curious look at her persona onstage and off.

Swinging back-and-forth between Lydia's spoken cabaret performances and some travel and tour footage with bandmates Joe Budenholzer and Terry Edwards, "Road Rant" is a mixed bag. Lydia's usual confrontational dissection and dissertation on sexual politics is tiring and overdone. Where director Aldighieri succeeds is in showing Lydia "opening up" to more honest opinions and attitudes, outside of her public persona. She undoubtably has tons of stories to tell, and much insight. As it stands, "Road Rant" is an interesting look at Lydia Lunch, definitely worthy for fans but I don't think it's going to convince her detractors that she's much more than an aging punk rocker who's bitter about life. (MVD Visual)

Lydia's official website
Posted by Goatsden at 9:02 AM No comments: 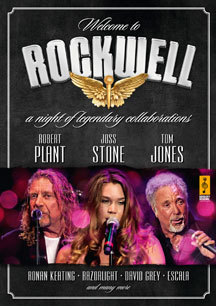 As a gala benefit for the Nordoff-Robbins music therapy program, this one-time only 2011 London concert showcased some of pop's heavy hitters, and featured some unlikely onstage collaborations. Sadly, it's mostly pretty underwhelming.

On this 14-song DVD, we get highlights from Robert Plant, Razorlight, Joss Stone, Tom Jones, David Gray, and Escala. Overall, forgettable and rather "by-the-numbers". Robert Plant is the sole standout, as he dares to re-imagine several classic Led Zeppelin songs with an African flavor. The all-star finale of "Let It Be", performed by everyone except Plant, is a thorough disappointment and an indulgent mess, with Stone's annoying wail filling in every space Lennon & McCartney intended to keep open. A good benefit and cause, but only serious fans of Robert Plant need check this out. (Masterpieces via MVD Visual)
Posted by Goatsden at 8:59 AM No comments:

Tellitron - "Not A Nightmare Just A Bad Dream" CDR 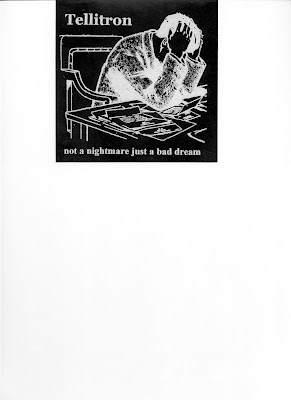 Evansville native Thomas Ellis' solo project Tellitron has been active for a number of years, even playing some live gigs in Illinois. Nonetheless, "Not A Nightmare" is the first I've heard, and it's a sturdy set of 9 well-composed songs. Tellitron's energetic rock/electronic hybrid echoes dark 80s post-punk icons like Peter Murphy or early Ministry, with plenty of live instrumentation and a proto-synthpop vibe.

The dramatic and propulsive "A Reunion (To End All Reunions)" opens, and is certainly a highlight, as is "Loyalty To The Band", which wrestles it's anthemic melody into your head with startling ease. "10:22" is a darkened and claustrophobic post-punk mantra that could almost be Public Image meets Bauhaus. The remaining tracks also harken back with eighties stylings, yet never lapsing fully into a "retro" category. Surprisingly developed songwriting, solid production, and a lot of fun to listen to, Tellitron's grooves are both accessible and edgy. (self-released)