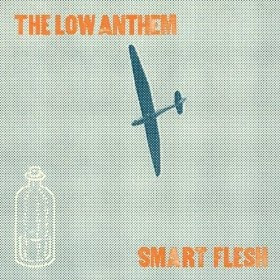 Recorded (at least partially) in an abandoned pasta sauce factory in their home state of Rhode Island, this album further proves that the Low Anthem are one of America's best unknown musical treasures. Sure, they have only a mere 3 albums under their belt, but "Smart Flesh" is wise listening for anyone who appreciates rustic and earthy indie pop with country and drone flavorings.
The spectral and heartfelt opening paean, "Ghost Woman" opens it all in a low-key fashion. It's a great little song, with wonderfully literate verbiage. Perfect. "Apothecary Love" is another memorable and catchy old-time country lament. Beautiful. "Boeing 737" is a rousing and moving anthem, and "Wire" is a lovely clarinet interlude by the band's Jocie Adams. "I'll Take Out Your Ashes" is an appropriately sparse banjo-and-radio ballad featuring charismatic front man Ben Knox Miller. But it's all good, here. Every song tells a story with grace and poeticism.
The Low Anthem will easily appeal to fans of stuff like Dylan, Wilco, or even similarly-named Minnesota drone-rockers Low. This album couldn't get higher marks from me. So what are you waiting for? (Nonesuch Records)

The Low Anthem site
Posted by Goatsden at 3:36 PM No comments:

Count Basie - "Then As Now, Count's The King" DVD 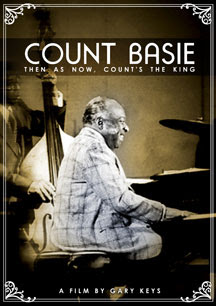 A loving 70-minute tribute to the legendary jazz pianist extraordinaire, "Then As Now" is unusual in that it paints a vivid picture of the man through a roundtable discussion among some of his old bandmates and friends. As well, a plethora of visual aids (vintage clips and photos) make these remembrances come alive. There are plenty of humorous stories and experiences discussed (including Basie's work with such greats as Billie Holliday, Billy Eckstine, Joe Williams, and others) and the respect and fondness these old jazzmen have for Basie is considerable and palpable. As a documentary on the beloved man, this one's full of insight and warmth. Quality work, and worth a look for anyone interested in Basie's prestigious perch in the pantheon of American music. (MVD Visual)
Posted by Goatsden at 1:41 PM No comments: 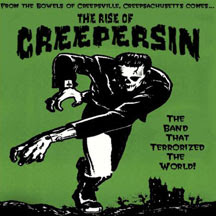 This reissued 2005 debut album from horror-punk duo Creepersin is an appropriately silly and primitive homage to classic horror and monster films. With a distinctive lazy and spooky vocal style, Creepersin's 3-chord punk rock could almost be a missing link between the Cramps and Misfits. Fronted by trash-horror filmmaker and author Creep Creepersin, every song here has a drive-in monster theme, from "Lycanthropy" to "Cleaverland" and "The Hills Have Eyes". Good fun, and a perfect accompaniment to anyone's Halloween party. (Creepsville Entertainment)