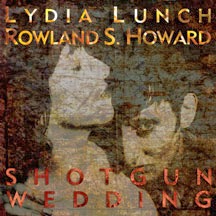 Classic swamp-blues rock from some legends

This is an expanded, remastered reissue of Lunch & Howard's classic 1991 album, which in my book remains a linchpin of either artists' separate careers. In fact, I'd wager this to be Howard's finest work since his Birthday Party days. It's a shame he's not around to add to that fine legacy. Still, "Shotgun Wedding" is a swampy post-punk affair full of dark edges and seductive textures. J.G. Thirlwell's dry, raw production is perfect, capturing an essential tension and junkie back-alley sinew. In short, this is a great album.

Opening with the iconic and slithery "Burning Skulls", the album moves forward to a gloriously gloomy (and bluesy) cover of Led Zeppelin's "In My Time Of Dying". "What Is Memory" is a skeletal showcase for Howard's prickly, twangy guitar-work. "Pigeon Town" is another highlight, being a rowdy swamp-blues affair, again highlighted by Howard's tight guitar. The album's closer is quite possibly the pinnacle, being Alice Cooper's magnificent "Black Juju" -- a slithery, snake-like trance rock track that hits some intense and dynamic highs. Between Howard's potent riffs and Lunch's cynical, aggressive vocals, "Shotgun Wedding" is a marvelous and memorable dark-edged rock trip, and one that just gets better with age.

This reissue adds Lunch and Howard's fine studio cover of Lee Hazlewood's "Some Velvet Morning", as well as 5 live recordings of fair to bootleg quality. And although these bonus additions aren't quite up to the quality of the album itself, it's certainly worth a look for serious Lunch or Howard fans.

Posted by Goatsden at 5:26 PM No comments: 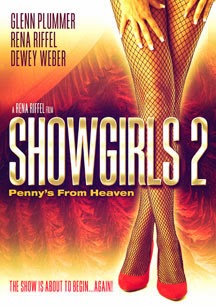 I must give a hand to multi-tasking actress Rena Riffel, who produced, wrote, directed, AND starred in this one. And although the film itself is long-winded (running at 2.5 hours!), convoluted, and downright silly, the fact that she alone was responsible for most of it is pretty well cool.

The story here supposedly picks up where the poorly-regarded "Showgirls" left off 18 years ago. Riffel (who looks great and fit at 44 years old and isn't afraid to bare her fine ta-tas, by the way) reprises her role as Penny Slot -- an aspiring dancer/showgirl who just can't get a break. Her quest takes her out of Las Vegas, and into sleazy, seedy Hollywood, where she has to sift her way through all kinds of trials and tribulations for "the part" -- most of which entail sleeping with (or getting felt up by) someone.

Still, "Showgirls 2" leaves a lot to be desired, and even as a campy (and unofficial) follow-up, it's not one I'd easily recommend.

Wild Eye Releasing
Posted by Goatsden at 5:21 PM No comments: 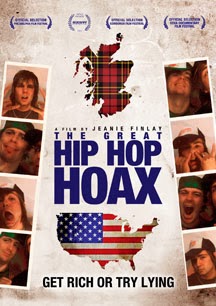 Another excellent documentary that I'm glad to have seen, "The Great Hip Hop Hoax" is a fascinating look at the Scottish hip hop duo, Silibil 'N Brains, who got themselves signed to Sony UK only after posing as American street hip hop MCs (after a devastating audition where label heads dismissed them as "rapping Proclaimers"). So, with fake accents and artificial "street cred", these pasty Scottish boys ended up making mad money, seeing big city lights and even garnering MTV airplay as "the next Eminem". Then it all came tumbling down as fast as it started, after a hailstorm of drinking, partying, and womanizing (naturally).

Interviews with both members, their families, and the record executives that landed them are enlightening, detailing the way that Silibil (real name Billy Boyd) and Brains (aka Gavin Bain) began their great hoax. Their California-boy, skate-punk, street-thug mentality convinced even those close to them, and it's a credit to Boyd and Bain's acting skills that they could take things that far.

A great tale, and a weird kind of "success story", calling out the major labels on such a bluff. Sure, the boys are still around -- Bain still performs his own brand of hip-hop/rock as Hopeless Heroic, while Boyd got married, had children, and now works in the oil industry.

A superb documentary, and a story for the ages. 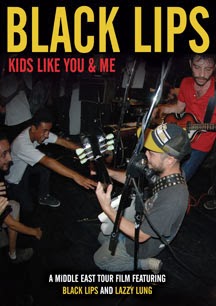 
Going into this unfamiliar with American indie rock act Black Lips, I had no idea what to expect here. But I'm glad I took the chance to devote time to it. As much a study in culture, social and media bias as a straightforward tour film, "Kids Like You & Me" places Black Lips (and Lebanese touring partners Lazzy Lung) on tour within supposed "American-hostile" Middle Eastern countries. On their tour itinerary, the bands encounter enthusiastic crowds in Egypt, Dubai, Iraq, Lebanon, and others. Yes, the kids just want to dance, drink, party, and have a good time there, too.

The guys in Black Lips are mostly humble and likeable chaps, and their willingness to put aside biases and prejudices speaks volumes for them, as well as their Middle Eastern counterparts. I'm sure there were some strained and challenging moments on this tour, but overall, director Bill Cody and the band choose to highlight the good times and goodwill they received overseas. It's truly a global world, and I thank Black Lips for being good ambassadors. Maybe I'm not a huge fan of their music, but this film was enlightening and enjoyable all the way through.

Black Lips dot com
Posted by Goatsden at 11:30 AM No comments: 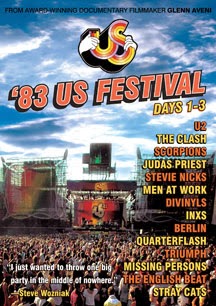 After 30 years, this landmark US pop festival (instigated and funded by Apple co-founder Steve Wozniak) finds a release on DVD. Mind you, this is merely highlights, but it works well, especially as there are added present-day commentaries from Wozniak and others involved.

Let's see, what else need I say about this "best of"? I could just name the artists. You get (mostly single tracks) by Divinyls, INXS, Stray Cats, The Clash, Judas Priest, Scorpions, Berlin (who's great "Sex (I'm A...)" is sadly truncated), U2, Missing Persons, and others. It's all filmed exceptionally well and professionally, though the transfer is from analogue (aka VHS) sources.

In short, this is a fine look at a legendary music festival with some great top-of-their-game talents. Maybe not essential for anyone but the staunchest collectors, but a worthy and entertaining watch, nonetheless.

MVD Visual
Posted by Goatsden at 10:27 AM No comments: