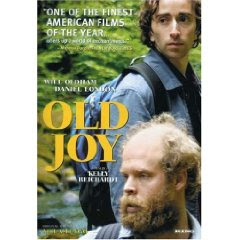 This recent low-key indie release stars Daniel London (as Mark) and Will Oldham (as Kurt) as two old chums who decide to head out to the mountains in Oregon for a restful escape from their stressful city lives. With Mark's dog Lucy in tow, they retreat to an isolated area with hot springs, where they camp out, catch up on old times, talk about life, drink beer and smoke, and ruminate on the state of things. Both men seem tense at times, but ultimately this open-ended look at how things change is as much an appreciation/love letter to the wilderness as it is about the characters, and their growing distance in the 'civilized' world. It's an almost Herzog-like set of natural visuals accompanying a storyline that seems almost incidental. A lovely little film, though probably not for everyone. As a musical side-note, Oldham does not contribute any music, but the lovely soundtrack here is performed by Yo La Tengo.

Posted by Goatsden at 4:04 PM No comments: 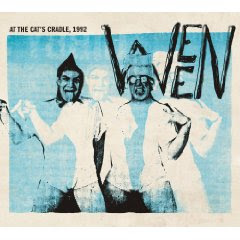 Ween, to the novice, could easily come across as sophomoric, juvenile, and maybe even unprofessional. But to those who look a little deeper, these goofball virtuosos are fearlessly professional risk-takers and unlikely pop-stars with a voracious musical appetite, and Dean and Gene could easily be successful at any kind of music. They have been musical chameleons for many years, and their mastery of all kinds of sounds is inspiring and truly 'punk rock'. They are reckless and cheeky, and always surprising and fun.
'At The Cat's Cradle' is a very early live show (soundboard, luckily), from their days as a duo-with-a-drum-machine. If Ween are, umm, 'refined' master-pranksters nowadays, songs like the opening 'Big Jilm', are raw and jammy with mid-song dialogues and some improvised silliness. Ween's any-genre predilection encompasses weirdo pop, weirdo funk, weirdo post-punk, and something else that resembles classic rock. 'Don't Get 2 Close (2 My Fantasy)' is a particularly theatrical, dramatic take/parody/homage to big stadium rock, and a standout that culminates in some messed-up sampling at the tail-end. 'Mango Woman' is like a rasta Butthole Surfers - and yet somehow getting sentimental and sweet in a stoned-out way. 'El Camino' borrows a little from 'White Rabbit', and the vitriolic 'You Fucked Up' is a dirty rock outburst (in a wonderfully primal fashion). 'Buckingham Green' is a mellow, almost folksy ballad that ends up spacing out with some wicked guitar soloing. The attached DVD features some bootleggy footage of the boys having fun on-stage and during a radio interview. Inessential, but more than watchable, especially for single-camera footage.
Ween are always adept at tackling various styles and moods, and even in these very early days, their comprehensive knowledge and love for music is evident. And though this live set can be a bit draggy in spots, there's plenty of Ween-genius (Weenius?) to go around. (MVD Audio)

Ween site
Posted by Goatsden at 10:20 PM No comments:

This is a great little video tour of Best Friends Animal Sanctuary's famous DogTown (as featured on the successful National Geographic Channel TV series), featuring founding member Michael Mountain...a wonderful glimpse into the tireless and beautiful work done by this organization. If you're ever near Kanab, Utah (in-between Las Vegas and the Grand Canyon, roughly), do yourself a favor and volunteer at Best Friends, for the animals (and for yourself). It was a great experience I'll never forget, and one that I hope to repeat again someday!