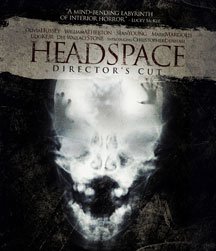 A nicely-done psychological horror here from 2005, and with some name actors, as well. "Headspace" is the tale of a young man (played well by Christopher Denham)  who finds himself plagued by tortured visions, extreme headaches, and an increased intellect after meeting a mysterious street-side chess-master. A series of murders occurs, and Denham's character is somehow involved.

This well-shot and directed (and intelligent) little film also includes appearances by the lovely Olivia Hussey, Sean Young, Dee Wallace Stone, and Udo Keir. And while "Headspace" doesn't feature a lot of blood and guts (aside from an early shotgun blast) or sex (aside from a particularly nice one with Pollyanna McIntosh), it's a solid and tense film that holds it's own in a polished and subtle fashion. (Modern Cine/MVD Visual)
Posted by Goatsden at 10:25 AM No comments:

Just got the news today that Jamie Duffy, famed as guitarist/programmer/producer for Chicago industrial/electro rockers Acumen Nation & DJ? Acucrack, and producer/engineer for bands like Ministry, Pigface, Chris Connelly, Sister Soleil, Chemlab, Lard, and others, passed away June 21, 2012 by his own hand. We at Goatsden HQ never knew Jamie personally, but we certainly own many releases bearing his name and labor. He will be missed, and we send our deepest condolences to his friends and family.  R.I.P. Jamie.

Posted by Goatsden at 6:54 PM No comments:

Mono - "For My Parents" album teaser

Due for release on September 4, 2012 via Temporary Residence, Japanese kings (and queen) of awesomeness, Mono, release their new studio work, "For My Parents". Here's the first teaser video. I am stoked.

Posted by Goatsden at 5:43 PM No comments: 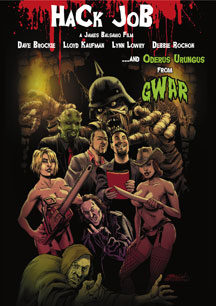 Proclaiming on the front to feature Dave Brockie (Oderus Urungus of Gwar), Lloyd Kaufman of Troma, and the luscious Debbie Rochon, this well-meaning indie horror/splatstick comedy has its heart in the right place, but otherwise comes out a real mess. With merely guest appearances from the aforementioned, the other actors within "Hack Job" cannot hold this one up.


The convoluted script, with something about 2 struggling filmmakers who get the ultimate horror script directly from Satan himself, is quite messy, often making no sense, and with a number of unrelated vignettes, it's tough to grasp exactly what's going on. On the other hand, "Hack Job" doesn't seem to take itself seriously anyway, and looks like it was a fun project for the director and team. To it's credit, there are, as promised, a surplus of over-the-top gore and flashy, in-your-face, and bouncy breasts, so "Hack Job" brings what every fan of trashy B-horror expects -- a bloody good time. (Acid Bath Productions)
Posted by Goatsden at 7:59 PM No comments: 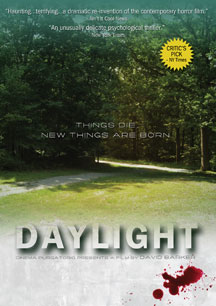 Ah, finally -- a micro-indie film with intelligence and subtlety. "Daylight" is a dark drama (not horror, as the packaging would have you believe) that features a young European couple who, on their way to a wedding somewhere in the rural states, fall prey to a team of kidnappers.

The pregnant wife Irene (played with a subtle eroticism by Alexandra Meierhans) gets to know the kidnappers as she is held hostage in an old farmhouse. Her relationships with her captors is subtle, and we're not always sure who is playing who. The kidnappers also have some depth, being quite polite to Irene, but with an underlying sense of unhinged menace. As the kidnappers' schemes gradually go astray, Irene uses her wits to avoid being injured or abused, all the while watching her naive (but murderous) kidnappers fall apart.

"Daylight" is an engrossing, well-shot, well-directed, and all around well-done film that deserves to be seen. Do yourself a favor and find this one. (Cinema Purgatorio) 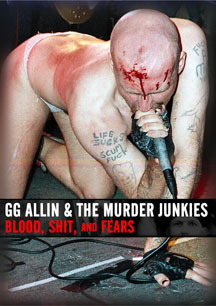 The legend of rock renegade Allin hasn't waned since his passing in 1993, and this collection of brief early-90s live bootlegs furthers the man's legacy as the most vile man making music in his era. Armed with drugs, alcohol, and a serious case of audience-baiting misanthropy, Allin stalked the stage, more often than not, completely naked, and unafraid to start fights, defecate, and self-multilate.

Compiling live audience-shot gigs from 1991 and 1993, this collection of VHS transfers is of decent quality, and the camera-operators' mobility is helpful, if for no other reason for his or her own personal safety (as Allin was known to assault concert-goers or toss his excrement at them). There are a total of 5 live shows included here, with some obviously a wee bit more subdued than others, but all of which featuring the rough and jagged proto-punk mess that was G.G. and his band. Don't expect top-tier songwriting or poeticisms, to be certain, but "Blood, Shit, And Fears" is as raw, uncompromising, and unforgettable as the man was. (MVD Visual)

GG official site
Posted by Goatsden at 10:04 AM No comments: 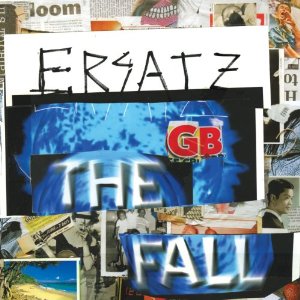 So the Fall are an English institution. I'm not as much of a fan as I probably should be, and I don't care to count the band's many, many albums they've recorded since 1979. Suffice to say, The Fall are prolific. And, did I say legendary?

Led as always by ascetic frontman Mark E. Smith, The Fall's umpteenth album, "Ersatz GB" begins with the taut and aggressive proto-Krautrock of "Cosmos", whereas Smith sneers his way through a tangle of spiky punk-edged guitar and drums. "Taking Off" is more atmospheric, while "Nate Will Not Return" is a claustrophobic assault, with Smith's streetwise storytelling at the forefront.

"Greenway" is a gruff and heavy rocker with Smith's formidable anger palpable. "Happi Song" is a sweet and soft middle point, with keyboardist Eleni Poulou taking over lead vocals. From there, it's back to Smith and company's sweaty, dirty rock with electronic elements around the edges. This is a superb album, and I really need to look at this band a bit closer, no doubt about it. (Cherry Red/MVD Audio)

The nearest to an official Fall site
Posted by Goatsden at 9:18 AM No comments: 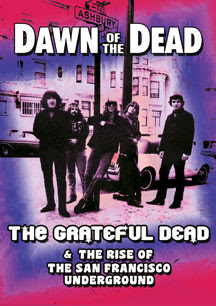 This unauthorized bio covers the Dead's earlier days, as well as presenting a well-researched look at the whole mid-to-late sixties psychedelic scene coming out of San Francisco. As with other Sexy Intellectual releases, a number of critics, musicians, and historians are interviewed, and a plethora of classic footage is highlighted.

Not being a fan of the Grateful Dead, I remained engrossed in this well-done documentary, so anyone interested in the whole counterculture scene and music of the 60s shouldn't be disappointed. Deadheads will certainly revel in this look at the formative days of the world's foremost peacenik "jam" band. Well-done and enjoyable! (Sexy Intellectual/Chrome Dreams)
Posted by Goatsden at 9:05 AM No comments: