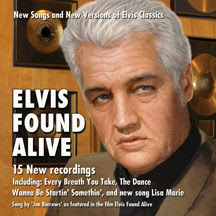 A clever marketing tool to coincide with the release of the film of the same name, this is a set of "15 new recordings" from the King. Here, we are treated to Elvis-styled covers of The Police ("Every Breath You Take"), Michael Jackson ("Wanna Be Startin' Somethin"), and Garth Brooks ("The Dance"), among others. By my ears, this is a novel and fun set of impersonations, staying fairly true to the traditional, classic Elvis sound. He updates "his own" classics like "Heartbreak Hotel" and "Blue Hawaii", even. The electro-tinged version of "Hawaiian Wedding Song" is pretty awful (even painful), and the closer, "Elvis Is Back Rap" proves that this release is firmly tongue-in-cheek. A novelty, at best, but a fun and playful one. (MVD Audio)
Posted by Goatsden at 8:20 AM No comments: 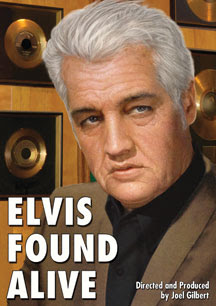 Purporting to have located the real Elvis, now living under witness protection in California, infamous director Gilbert here "interviews" the man (with face obscured) about his life before and after his supposed (staged) death. Citing his involvement with the DEA and the Feds in defeating the "Communist" plague and the anti-American sentiments of the far left in the 60's and 70's, "Elvis" here explains it all. Thankfully, it's a fairly well-done historical look at the King, and Gilbert has tons of fine archival footage and photos to share.

Sure, this is a mockumentary of sorts, and Gilbert is easily attempting to stir sensationalism in favor of sales. That's a given. The voice of "Elvis" is far too measured and steady, being far too close to the real man's young days, and his stammering is rehearsed as well. A real conversation would not normally be as clean. So, I have serious doubts. This is an obvious hoax.

As a documentary with a novel twist, "Elvis Is Alive" is perfectly fine. Sure, some die-hard Elvis fans consider this some kid of sacrilege, but I found it rather fun. (MVD Visual)
Posted by Goatsden at 8:15 AM No comments: 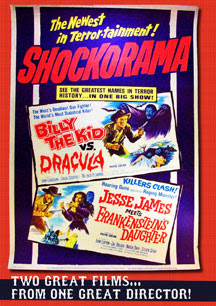 Comprising two different titles from prolific director Beaudine, this set highlights some of his more curious drive-in/trash-films of 1966. First up is "Billy The Kid Vs. Dracula", starring John Carradine -- a silly premise but fun nonetheless. Sure, expect quickie sets and some hammy non-acting, but Carradine's creepiness, and Chuck Courtney's Billy The Kid is as Saturday matinee-hero as you can get.

The second feature is "Jesse James Meets Frankenstein's Daughter", another mash-up of great Western heroes and classic Hollywood horror. Again, I found this to be a fun and lightweight guilty-pleasure, and certainly leagues better than modern Z-grade horror schlock. Great characters, silly predicaments, and some memorable, nearly-forgotten novelty screen gems.

(Cheezy Flicks)
Posted by Goatsden at 8:11 AM No comments: