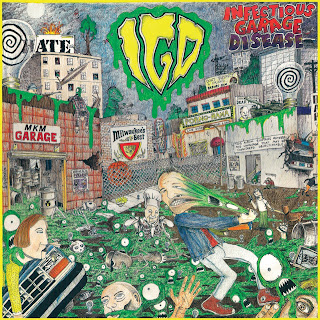 Now this is a retrospective/historical release done right! Infectious Garage Disease were a California thrash punk band, and in 1988 they released their one and only LP, which is the foundation for this re-release. Joined by 22 demotape tracks (there are well over 40 cuts here), this disc is filled out to just under the 60 minute mark. With the addition of video files and mp3s of live mayhem, it's all a fan could hope to ask for. Really, it's a comprehensive history of this forgotten band. And I like it.

The demotapes aren't quite as, uh, refined (maybe "honed" is a better word), but the amount of sheer punk energy here is tactile, and reminds me of a less-complicated time, seeing bands much like I.G.D. locally in small venues. Great stuff, and worthy of such a fine re-release.

Negative Reaction Records/MVD Audio
Posted by Goatsden at 8:19 AM No comments: 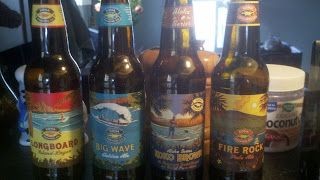 Having first tasted some of these while actually in Hawaii (thanks to the wonderful Pono Market on Kauai), I've often wondered why these semi-major beers weren't sold here in Indiana (Kona is part of a collective that also includes the nationally-distributed brands Widmer Brothers and Red Hook). Well, as of late 2012, Kona has arrived, so I thought it time to re-taste these mainline brews. My reviews run on a scale of 1 (terrible) to 5 (terrific). That means anything in the 3rd tier or higher is well worthy of your time and attention. Make up your own mind, though, and mahalo!

Pale, cloudy yellow, with rich ample white foam. Modest, but attractive lacing. Nose is yeasty, bready. Not bad at all. Taste is fairly typical lager, though substantially more flavorful than most. Again, as with the aroma, I get yeast and crusty bread. Malty but not too simple or flat.

This one proved crisp and refreshing, and among the better lagers I've had lately.

Golden yellow when poured into my pint glass. Superb fine white head of foam. Lace is small, but loopy and somehow appropriate for the "surf" theme. Nose brings some curious tropical fruit aromas -- I get pineapple and mango. Very appealing! Taste also echoes some of these tropical fruits, especially citrus, alongside the rich malty backbone. I get a bit of citrus hoppiness at the finish, too, making this a very enjoyable and easy to drink session ale.

Perhaps my favorite of Kona's mainland bottled brews, so far. At least until I had this next one...

This is an unusual and fitting stylistic twist. It's an American brown ale, but with an added infusion of toasted coconut. Aloha!

Pours a deep ruby brown, with a nice head of fine, off-white suds. lovely and attractive lace. Nose is full of toasty coconut. A hint of cocoa or chocolate in there as well. I really like this -- unique and distinctive. Taste is very coconutty-- with more of the chocolate hint featuring alongside. Very enjoyable. There's also a slight hint of hops late in the finish, bringing this around full circle.

I dig this brew and will be revisiting.

Clean amber, with a rich tan head. Limited, but pleasant spoke lacing. Nose is malty sweet, with only a slight nod to the citrus hops I'd expect to be prominent. Taste is well-balanced -- the hops are muted by a profound malt profile.

Tasty, but far less hoppy than other pale ales, Fire Rock is an easy drinker and pleasing, but not stunning.