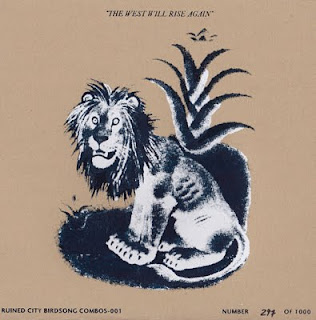 "What We Loved Was Not Enough", in 2 parts, is a slow and almost mournful folk/chant reflection. "The State Did Not Agree" is a similar lament, with the wailed, strained vocals of Efrim Menuck. The fourth cut, "Psalms99", doesn't divulge much from that formula, either. This one's for collectors only, it seems. Me? I'm anxiously awaiting that new Godspeed! album. (Ruined City Birdsong Combos)
Posted by Goatsden at 11:48 AM No comments: 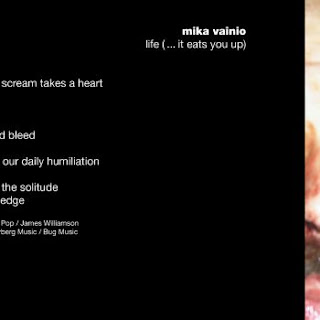 One half of Finnish electro-acoustic deviants Pan Sonic, Vainio has been producing left-field electronica for many years now. This solo release presents his take on affected, processed, and prepared guitar.

On the relatively abstract 13-minute opener, "In Silence A Scream Takes A Heart", Vainio moves from a playful minimalism to overtly threatening tones, with huge, crushing, sustained guitar chords (something akin to Sunn O))) or Swans, perhaps). The ominous intents are continued, as "Throat" goes for a more blunt no-wave noise angle. "Mining" is a thick, rhythmic attack, with more jagged sounds alongside a primal, mantric beat-box rhythm. The cover of Iggy & The Stooges "Open Up And Bleed" is both cold and sleazy, like a soundtrack to an imaginary urban nightmare. The remaining tracks echo this sentiment, skirting the edges of abstract and soundtrack music, but with all the foreboding menace of a serial killer. Vainio is a world class sound manipulator, and this collection proves that his sources aren't as important as what he gets out of them. A stunning selection, and not for the faint of heart. (Editions Mego)

Mika Vainio site
Posted by Goatsden at 11:36 AM No comments: 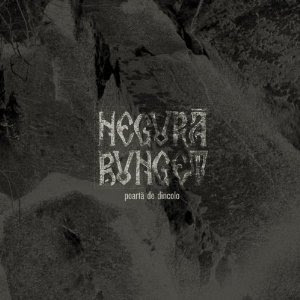 With their last blast of visionary black metal excellence, veteran Romanian group Negura Bunget proved they were a force to be reckoned with on the international level. Now, with this new 4-song EP, they've further gravitated away from their roots.

Embracing classical, soundtrack, and symphonic inspirations, the band retains some ties to their old styles, but now these are gene-spliced into grandiose and epic movements, still bleak and depressive, but with an added air of refinement among the doom. Ambient passages, dulcimers, panpipes, and xylophone accent the often oppressive atmospheres and the periodic onslaughts of guitar/drum aggression. Impressive! (Code666)
Posted by Goatsden at 11:30 AM No comments: 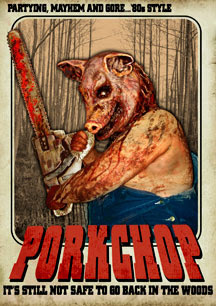 In the spirit (and direct influence of) such classic splatter films as "Friday The 13th","Evil Dead", and "The Texas Chainsaw Massacre", this micro-indie lacks the drama, tension, and humor of its predecessors.

Take the typical scenario -- a group of careless teens, obsessed with sex and booze, venture to an isolated campground for a night of frivolity, only to meet up with the legendary pig-faced murderer known as "Porkchop". The consequences are as expected. I wanted to enjoy this, but there was really next to nothing interesting nor unique to grasp onto, save for some decent gore and a few breasts. Save your money and avoid this poor imitation. (Independent Entertainment)
Posted by Goatsden at 11:26 AM No comments: 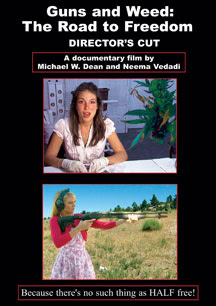 This scattered documentary compares/juxtaposes the arguments against gun control and for marijuana legalization into a single film, and a scattered mess it is. With their hearts in the right places, the filmmakers illustrate an ideal of non-aggressive, pro-American freedom and upstanding Constitutional rights. No problem there. But the talking heads here are heavily edited (to the point of being distracting), and the pseudo-news format is silly and amateurish.

I understand that this is meant to be both educational and fun, but the awful hip-hop interludes and primitive visual effects are off-putting. I say no thanks, guys. Maybe next time. (MVD Visual)
Posted by Goatsden at 11:21 AM No comments: