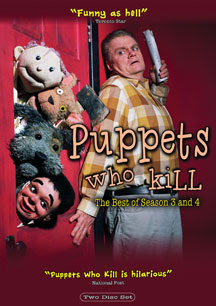 This Canadian comedy series won me over, and convinced me that someone stateside should've taken notice of this raw, dark, and hilarious series years ago. Shame on you, American networks!
Anyway, "Puppets Who Kill" (which originally aired from 2002 to 2006) was a sit-com starring Dan Redican as a social worker who runs a halfway house for wayward puppets who've gone far astray. We have Buttons the sex-addict bear, Cuddles the neurotic baby, Bill the murderous ventriloquist dummy, and Rocko the chain-smoking street-thug dog. You get treachery, lechery, cheating, gambling, drinking, larceny, robbery, and plenty of foul language, implied murder, and sexual situations. Like "The Muppet Show" for adults with a dark sense of humor, this show had me hooked and wanting more. A hidden treasure well-worth investigating. Now why doesn't Comedy Central or Adult Swim hook up the rest of America with this cool and unique show? (Video Services Corp via MVD Visual)

Puppets Who Kill site
Posted by Goatsden at 1:34 PM 1 comment: 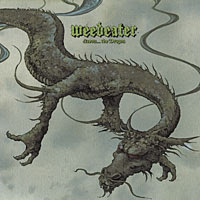 After an extended hiatus and some unusual experiences (lead shrieker Dixie Dave Collins accidentally shot his big toe off last year), sludge-metal pioneers Weedeater return with this Steve Albini-produced monolith of deep swamp-blues-nightmare metal.
Hailing from North Carolina and formed from the ashes of 90's scuzz-metal act Buzzov-en, these feral audio marauders have crafted a potent and extreme album that dares to meld thick, sludgy Southern blues rock with extremely slow tempos and an evil-edged post-Sabbath-meets-noise attitude. No strangers to vice, Weedeater's metal reflects an, eh, "enthusiasm" for the carefree lifestyle and its attendant leafy greenery.
Standouts include the molasses-thick stoner blues of "Turkey Warlock", the playful acoustic blues of "Palms Of Opium", and the immense and catastrophic "Homecoming".
You won't get many catchy melodies here or uplifting party hits, but Weedeater do provide a generous Southern-style helping of chunky guitar pummel and dirty down-home noise-blues that will please even the pickiest misanthropic miscreant! (Southern Lord) 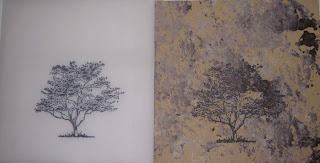 Experimental music from Monticello, Indiana? Most certainly, and micro-indie label Cohort Records, owned by John Gore, has been behind it for years now. 'kirchenkampf' is Gore's primary musical project, and it's been his most prolific outlet for audio collage since the late eighties.
"Lowland" is his latest collection of ambient soundscapes, and this set is an evocative and subtle set of darkened vapor-clouds of sound. And while most of "Lowland" seems relatively formless, the air of mystery and tension is palpable, and worthy of soundtrack consideration. There are seven tracks here, all titled with map references, but that's no consequence, as "Lowland" flows together as a unified whole. Sometimes relaxing and other times uneasy, this album functions well as a meditative background listen, and ideal for reading (or reflecting) alongside.
The handsome packaging and handmade slipcase (painted and stamped by the artist himself) elevates this release into the realms of visual art, as well, and anyone with an ear for the obscure and the subtle should find this to be a fascinating and worthy piece for the collection. (Cohort Records)
Posted by Goatsden at 2:58 PM No comments: 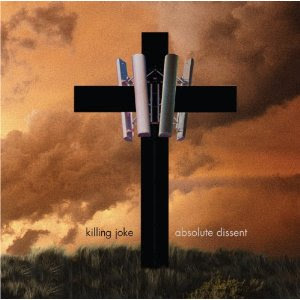 It's been said that in times of worldly distress, the mighty Killing Joke reconvene to ignite the fires of dissent. Their voice is one founded upon the reactionary climate of punk, and tempered by literature, poetry, and ancient history (and prophecy). They're a powerful conglomerate of influences, and "Absolute Dissent" is the band's most aggressive, emotional, and fearless release in some time.

The original lineup of Killing Joke assembled for the first time in 25+ years for this recording, and the intensity and unbridled passion are as strong as ever. Lead madman (and sometimes-classical composer) Jaz Coleman spouts off intelligent political discourse and borderline demonic ranting like no other. The opening title track recalls the band's early days, with Geordie Walker's distinctive grinding, choppy guitar and a a walloping, catchy chorus. That's not to mention the huge drums, courtesy of Big Paul Ferguson. Bassist (and now name producer) Youth returns with his dub-inspired low-end. It's crowned with Coleman's caustic seething rants (and his well-honed melodic voice as well). An effective lead-off track, for certain.

"The Great Cull" is a monster of sludgy grind and pound, with a vision of a Malthusian future where behind-the-scenes players manipulate the general masses via food, immunizations, and other means to control the overpopulation zeitgeist. Ominous, scary, and, unfortunately, likely very real conspiracy. There are no easy answers, but within the context of rock music, Coleman and Killing Joke stand head and shoulders above the rest, intellectually if not musically. "In Excelsis" is one of my favorites, being a spirited wall of noise that can't obscure an unmistakably sorrowful (yet simple) two-chord melody. Another brilliant track. "European Super State" needs no explanation, but the group here explores a club-worthy proto-industrial groove, and it works beautifully, coming across as more intense and aggressive than anything Ministry have done in years.

"The Raven King" honors former KJ bassist Paul Raven, who unexpectedly passed away in 2007. This is the emotional highlight of the record, and a touching tribute to Raven's swaggering persona and the love his friends had for him. Swells of guitar and keyboards amplify Coleman's poetic reflections. Other strong points include the fiery "Depthcharge", and the dubby closer, "Ghosts Of Ladbroke Grove". I could go on and on, as this is among my most-played releases of the last year. Amazing, brutal, intelligent, catchy, and monumental, "Absolute Dissent" is a triumph however you cut it. (Spinefarm Records)

Weedeater - "And Justice For Y'All" album 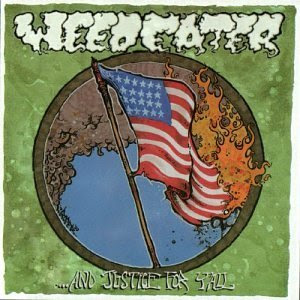 Rising from the burnt-out ashes of legendary scuzz-dirge metallists Buzzov-en, Weedeater emerged with an even slower, lower, and dirtier metal assault. This is a reissue of the band's 2000 debut album, with a couple of live tracks tacked on as a bonus. And, to use a well-worn cliche, it smokes.
Carrying on with it the same ragged, stoner rock ferocity as their previous incarnation, Weedeater seems to be having a measure more fun here. Witness their tongue-in-cheek cover of the Crosby, Stills, and Nash song, "Southern Cross". Nonetheless, that track is followed by the spooky cemetary-on-acid "#86". It's a weird, down-tuned slice of hallucinogenic reverberations like prime-era Butthole Surfers as seen through a funhouse mirror in a haunted house. I say it's bizarre, scary, and perplexing. Another standout is the slow-and-low basement-noise-blues of "Monkey Junction, which appears later in a live version, too. Grimy, dense, and murky sludge metal for antisocial miscreants? Surely, and good fun it is, too. (Sleeping Village Records)