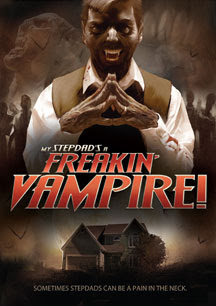 This low-budget indie horror/spoof did an admirable job holding my interest, despite some obvious shortcomings. What won me over?

Despite a silly premise and plenty of unnecessary reliance on CGI monsters (which were well-done for the budget), "My Stepdad..." boasts some relatively decent acting, and a likeable lead character (Lahcen Anajjar). Sure, this is a mild horror film with comedic elements tailored for a teenage audience, but "My Stepdad" is entertaining, if light, good-time that didn't have me cringing (or reaching for the 'STOP' button). The gore was fair (mostly green goo rather than bloody evisceration), and a lack of nudity didn't affect this one at all.

The camera work was well-done, with interesting angles and activity, and the score (by Douglas Edward) was also professional, stylish, and tiers above similar films. I say, well-done for vampire fans. I can see a promising future for director Matheny if he can maintain this level of professionalism. (MVD VIsual)

official site with trailer
Posted by Goatsden at 10:13 AM No comments: 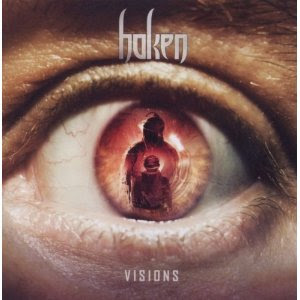 The opener, the piano-and-strings-laden instrumental "Premonition", brings a sense of fantasy to the table before erupting into a complex metal behemoth with weird jazz and pop juxtapositions. It's a promising and beguiling opening. "Nocturnal Conspiracy" follows, and showcases vocalist Russ Jennings' rich vocals alongside a strong sonic palette that incorporates, again, classic metal with complex arrangements and an almost jazzy sense of jam and space. The remaining tracks follow in this pattern, taking the listener on a surreal and theatrical journey. With high production values and top-tier musicianship, Haken's "Visions" are clear and engrossing. Fine work. (Sensory/The Laser's Edge)

Haken website
Posted by Goatsden at 11:50 AM No comments: 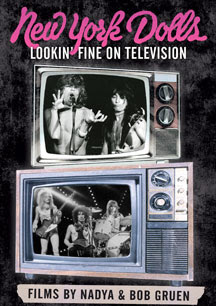 Hailing from New York (of course) in the early 70's, the NY Dolls were progenitors of the yet-to-break punk movement. The band, centered around frontman David Johansen and guitarist Johnny Thunders, rocked with as much swagger and androgyny as the early Stones, only with less blues and more of a raw, garage vibe, inspiring bands from the Sex Pistols to Guns 'N Roses in their wake.

This DVD collects a number of rare and long-lost TV appearances from the bands' heyday, and it's obvious that these VHS tapes were on the verge of decay. Fortunately, the poor, grainy, and often black-and-white footage is collaged and seamlessly mixed with quality audio and interspersed interview and backstage bits. So this turns into a cohesive 70-minute set of prime Dolls. Well-done, especially with the limited footage and resources. Maybe this one isn't a must-see for most punk fans, but completists will find "Lookin' Fine" more than essential. (MVD Visual)

New York Dolls site
Posted by Goatsden at 11:47 AM No comments:

Now, this is something I will need to see and experience...possibly the most intense and fiercely intelligent aggressive rock act in the world, the mighty Killing Joke are profiled and documented in this upcoming feature-length film. Check this trailer and see what you think. Wow. I am impressed and anxious.

Posted by Goatsden at 3:46 PM No comments: