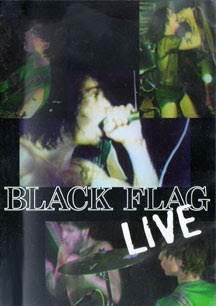 This old VHS transfer captures the band in their Henry Rollins days, in front of a British crowd in 1984. It begins with a daring Rollins reading Henry Miller to the rowdy punk rock audience, certainly a harbinger of his future as a stand-up comic and writer/storyteller. Nonetheless, this soon devolves into a melee of abrasive and wild hardcore/punk, complete with a shirtless Rollins bellowing his lyrics like a feisty bulldog. The band, led by the innovative guitar of Greg Ginn, amply back up the charismatic Rollins, as they roar through classics like "Nervous Breakdown", "Slip It In", "Six Pack", "My War", and plenty more.

It's a fine document of an era long gone, and though watchers should not expect an HD-quality experience, this is a great and rare look at one of American punk's legends. And for Rollins fans, a place to see a thinner, long-haired Rollins in his more youthful, raw element. (Visionary via MVD Visual)

The best Black Flag site out there!
Posted by Goatsden at 6:11 PM No comments: 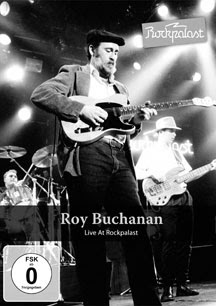 Often heralded as one of the greatest guitarists of all-time, the relatively unknown Buchanan reportedly turned down both the Rolling Stones and Eric Clapton to play in their bands (the Stones after the death of Brian Jones, and Clapton's early Derek & The Dominos) back in the 60s. His mastery of otherworldly fretwork encompassed early rock & roll as well as blues styles, and he influenced many of the greats.

This German TV broadcast, recorded live in 1980, presents Buchanan in his glory, with plenty of his own compositions as well as covers of "Peter Gunn" and Hendrix favorites "Hey Joe" and "Foxy Lady". As with other releases in the "Rockpalast" series, it's an impeccable recording, with multi-camera angles and clean, clear sound. Buchanan's music was so timeless, there's little clue that this show is over 30 years old, aside from the audience's attire. Masterful, and much respect to Buchanan, R.I.P. (MiG Music via MVD Visual) 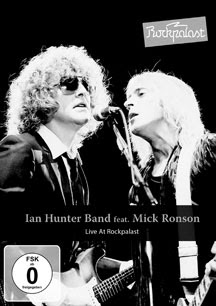 Formerly frontman for the legendary Mott The Hoople, Hunter is here joined onstage by longtime friend and associate Mick Ronson (best known for his work with Bowie's Spiders From Mars).

Recorded live in Essen, Germany in 1980, this made-for-TV show includes favorites like "Once Bitten Twice Shy", "We Gotta Get Out Of Here", and "All The Young Dudes". This is classic stadium-guitar rock of the first order, shot with multi-cameras and, as with previous "Rockpalast" titles, pro-quality audio. Another fine historical document, and a necessary purchase for fans of both Hunter and Ronson. (MiG Music via MVD Visual)