As an expose of the notorious Scandinavian black metal scene, this 80-minute documentary is billed as 'the most haunting and evil documentary ever made'. Of course, that is a very questionable and boastful claim, but fans and the curious alike should look beyond that. Indeed, 'Black Metal Satanica' does an excellent job in introducing and exploring the aims, claims, legends, history, and future of a scene that's been scandalized and (not coincidentally) elevated not so much by it's music, but by the public deeds of some of the scene's more, ahem, 'sincere' members. Tales of church burnings, suicide, murders, grave desecrations, and so on may be tabloid fodder, and bands like Sweden's Watain (who's frontman Erik is especially well-spoken) may appear to be cartoonish and juvenile to outsiders, but their ideals are sound and as strong as the Viking warriors some of these bands are descended from.
Anyway, the narration on some of this DVD, by Kenny Price, is over-the-top and far too dramatic, but the interviewees present themselves generally pretty well, and fortunately, they are the rule, rather than the exception. All-in-all, this DVD is a fascinating and enlightening look inside the soul of a scene tarred by some sensationalistic aspects (and some true extremists), but it's a scene that has, for the most part, resisted mainstream acceptance, and it remains a true underground subculture, with a passionate following. 'Black Metal Satanica' is a very well-presented, well-edited introduction to the scene, and the insightful interviews, photos, and music samples make for a concise, thorough, and comprehensive document. Kudos to all involved! Hail! (Cleopatra via MVD Visual)
Posted by Goatsden at 8:59 AM No comments: 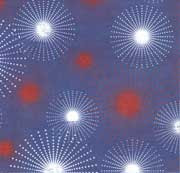 Two veterans of the avante-noise-cassette culture team up for this split release for rising micro-indie Cohort, and it's a definite winner. Jerman (best known for his recordings under the name Hands To) contributes '30 Minutes For Joe Jones'. His is a conceptual piece (dedicated to fluxus artist Joe Jones) recorded with a 22" wind gong, and played by a small fan. The sound is actually a splendid machine-drone that could almost be akin to David Jackman's work with Organum, but with more kinetic motion and less of a meditational nature. The metallic chimes reverberate nervously, but with an almost mystical opulence. Beautiful work and concept here, and a good listen, as well.

Turntable and sound manipulator AMK contributes 2 pieces - first being the brief 4-minute 'Neither Odd Nor Neither', which is a bludgeoning kick of skipping discs and random loopiness. His other piece, the 17-minute 'Lying To Rest', is another loopy piece that sounds like field recordings of waterfowl collaged with natural 'found' sounds and looped vintage vinyl records. Disorienting and surreal, in a most appealing way.

In summation, 'Split' is a fascinating an immersive set of experimental sounds that work well on both conceptual and aesthetic levels. Kudos to both artists for creating unique and individual sounds that inspire and provoke. And thanx to Cohort for releasing some consistently excellent sounds of late! (Cohort Records)

sound samples
Posted by Goatsden at 11:28 PM No comments: 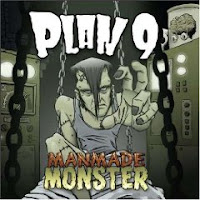 Starting life as a classic Misfits tribute/covers act, Plan 9 has since decided to write their own horrorpunk tunes, and, well, they're still a Misfits tribute/covers band! There are 16 tracks here (3 are actual covers of Danzig-era Misfits tunes), and Plan 9's B-grade horror/sci-fi-influenced singalong punk could almost be outtakes from 'Walk Among Us' or something. Enjoyable for what it is, 'Manmade Monster' still cannot be taken seriously. I mean, just look at the live photo on the back cover - Misfits skull logo on their backdrop, devil-locks...). So why not just listen to the real thing? Las Vegas is calling, guys. (Nickel and Dime Records)
Posted by Goatsden at 2:16 PM No comments: 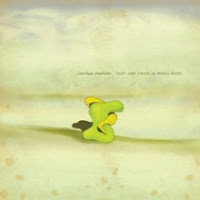 Inspired by a trip to the ICU (and a 6-day coma), as well as by French surrealist painter Yves Tanguy, composer Michael Allison's ambient electronic sculptures are both melodic and spiritually uplifting. 'The Look Of Amber', for example, is a rich soundscape with subtle piano and deep strings - all accenting a lovely, simple, and reflective melody. 'Palace Of The Windward Rocks' raises the pulse somewhat with more piano and strings, this time wrapped around a tight IDM-style rhythm. Contrasting with other ambient artists who create spacious and shadowy tones, Darshan Ambient's sounds are meticulously structured and even lean towards ambient techno in spots ('Multiplication Of The Arcs' or 'The Rapidity Of Sleep'). One of my personal favorites is the graceful and moving 'Tomorrow (For Nicky)' - a lovely and sensitive tribute to Allison's wife - surely a great source of hope and strength during the artists' illness. A fine release of meditational chill-out sounds for quiet contemplation and relaxation. (Lotuspike)
Posted by Goatsden at 1:40 PM No comments:

Kraftwerk "And The Electronic Revolution" DVD 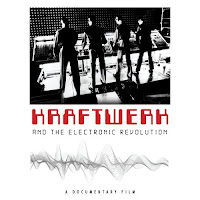 The influence that Dusseldorf, Germany's reclusive electronic act Kraftwerk had over modern music cannot be quantified. From their avante garde experiments of the late 60's to their proto-electronica of the 70's to their influence on the burgeoning hip-hop, techno, and dance scenes of the 80's and beyond, Kraftwerk's legacy is inescapable.

This (unlicensed but candid) documentary does a spectacular job following the history of the group, as well as tracing the rise (and fall) of the amazing 'Krautrock' scene that propelled acts like Can, Neu!, Kluster, Amon Duul, and Ash Ra Tempel to fame and international notoriety in the 60's-early 70's. Interviews with scene legends like Karl Bartos, Dieter Moebius, Hans Jochim Roedelius, Klaus Schulze, and Conrad Schnitzler are necessary and spot-on, and there's plenty of rare footage and sound samples to give better understanding to the discussions here. At 3 hours, it's an exhaustive and thorough examination of this important time in Germany's musical history. Being curious about this scene, but being a bit too young to truly appreciate it in it's heyday, this is a wonderful way to learn about Krautrock and Kraftwerk before diving into a big listening party. Superb and worthy! (Chrome Dreams UK)

Posted by Goatsden at 2:11 PM No comments:

Caress Of My Fist - "Etudes In Violence" CDR 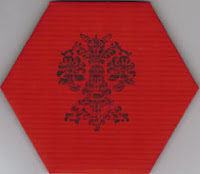 First off, the presentation here is impeccable - the professionally-produced CDR is housed in a stylish origami-style textured red paperboard, with informational insert. That said, the more important component here is the sound within, and it's fortunately as interesting as the packaging.

CoMF is basically a duo consisting of violinist Mike Khoury and sax/flutist Fred Bergman - both veterans of the free music and avante scenes. Here, they collaborate with drummer Curtis Glatter and guitarist Chris Riggs on a series of improvisational vignettes that hint at both out-jazz and noir-ish soundtracks - all based around a fist-fight theme.

Songs like 'Fat Lip' seem to allude to a dramatic sort of beat poetry (but minus the poetry) - evocative and haunting work. 'Knuckle Sandwich' is a brash and disorienting cut, with wild violin swipes and crazy sax bleating - a collision of chaos and invigorating unpredictability. 'Knocked The Wind Out Of Me' picks up the pieces - exactly as the title describes. 'Punched In The Stomach' (staying on topic, of course) feels the brunt of it (I can almost feel my ribs throbbing with pain), whereas tracks like 'Black Eye' seem to question what just happened - a state where the endorphins have kicked in. A superb, clever, and amusing musical approximation of a basic, old-school brawl! Nice work, and definitely a lot of fun to listen to - and certainly much better than the violent confrontation that it depicts. (Cohort Records)
Posted by Goatsden at 8:56 AM No comments: