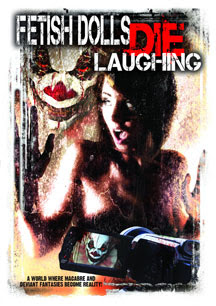 A pretty tame and uninteresting horror/crime drama here, and one that goes for a shock value yet fails miserably. Take one part Jason Alexander (George on "Seinfeld") and one part Danny DeVito, and make him a lo-rent foot-fetishist-slash-tickle killer. Then, make him possessed by a demonic "Tickle Monster", and send an attractive female detective to capture him.

Sure, I get some H.G. Lewis and Russ Meyer-esque trash cinema references within "Fetish Dolls", but the gore and sex are sorely under-represented, and the characters are quite wooden and silly. I became bored and found this one a challenge to sit through. (World Wide Multi Media)
Posted by Goatsden at 8:59 AM 1 comment: 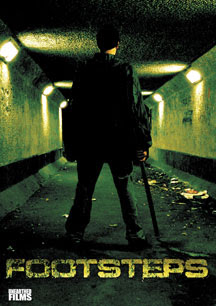 This British indie film introduces Nicholas Bool as Andrew -- a troubled, alienated, apathetic, and nihilistic young man who, after a series of life setbacks, finds himself involved in an underground ring of violent murder video filmmaking. "Footsteps" is reasonably well-done visually, but very quiet, bringing the disturbing elements more to the fore.

However, as a viewer, I fail to empathize for Andrew due to his virtually catatonic personality. Sure, the wooden performance was likely intended to illustrate the character's withdrawal from conventional society, but I could not connect enough to care. To it's credit, "Footsteps" brings plenty of gory knife-fight scenes, but still, this one doesn't quite make it. (Unearthed Films)
Posted by Goatsden at 8:38 AM No comments: