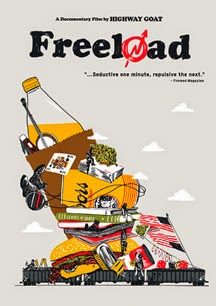 A relatively brief (65 minutes) but startlingly honest documentary here dealing with something most of us consider little more than a romantic anachronism — railway hobos. It’s difficult to imagine, in modern times, people who hop trains and travel as a lifestyle. “Homeless” could also be used to describe these folks, but this designation sometimes misses the mark. Often, today’s train riders do so out of choice. They’re renegades who buck the modern system of menial labor and expectations, and often seek adventure and a “live free or die” attitude and lifestyle.

Skaggs’ documentary focuses on several young vagabonds, most of whom, at least on the surface, ride trains by choice. Their “fuck everyone” attitudes come straight from a subcultural or punk rock playbook. Some are good people who just don’t fit in. Others seem to be troubled characters, with alcohol or drug problems that are only encouraged by what can be a lonely and frightening future. I was left fascinated by the characters and way of life, though “Freeload” certainly doesn’t romanticize the lifestyle. There are moments of refreshing freedom and joy nestled among other moments of depressing nihilism that I can’t help but feel are a harbinger of doom for some of these people. If anything, it’s a realistic portrait of an outsider viewpoint that some don’t even realize still exists. Well-done, but not something I’d ever want to see again.

Posted by Goatsden at 9:51 AM No comments: 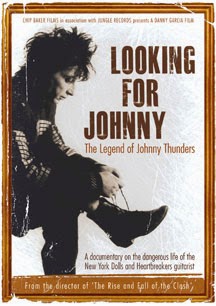 For some, Johnny Thunders was a rock legend — never quite making a dent in the mainstream, but inspiring countless garage and punk guitarists through the years. His work with the seminal glam/punk band the New York Dolls, as well as his later work with the Heartbreakers and beyond influenced everyone from the Sex Pistols to Guns ’N Roses. Found dead of mysterious causes in New Orleans in 1991, at a young 38 years of age, Thunders’ legacy exists with the numerous recordings he left behind. Speculation of possible foul play are persistent, but with Thunders’ serious drug addictions (and his vaguely hidden advanced leukemia), the police in New Orleans are seemingly content to let the case cool.

Garcia’s documentary took him 18 months to assemble, and his efforts don’t go unrewarded. Most of Thunders’ former bandmates, family members, friends, and associates are all featured here, as well as tons of live and behind the scenes footage. It’s probably about as complete and comprehensive a documentary as can be done on the subject, and will easily stand as the hallmark of Thunders biographies. Not being all that familiar with Thunders’ work, this proved to be a great intro and a completely respectable look at the man who was plagued by several (likely fatal) vices, yet stood tall as a rock icon. A wonderful rock bio, and a fine film detailing a tragic rock star’s rise and fall.

Posted by Goatsden at 9:47 AM No comments:

“My Name Is A By Anonymous” DVD (director: Shane Ryan) 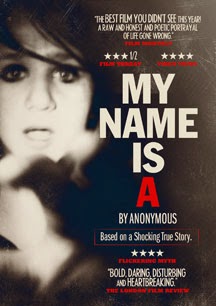 Now, this is one disturbing flick. It’s loosely based on the true story of teenage murderer Alyssa Bustamonte, who killed a friend just for kicks, and that whole nihilistic mindset is echoed here. Filmed on a handi-cam in parts for a hyper-realistic texture, “My Name Is A is not horror, per se, but simply horrific. It’s a tough to stomach film that absolutely nails the bottoming out of modern teens at the hands of abuse, bullying, and peer pressure.

Following several girls who one by one unravel until they all converge upon a terrible fate, “My Name Is A” features all unknown actresses, all of whom do fantastic and believable work here (especially Alex Damiano, who is more than convincing in her role as abused teen with awful secrets). Realistic beyond arthouse, this film can't help but be affecting. I left shocked and almost sad. Sure, this one’s very much a low-budget indie, but don’t let that stop you — "My Name Is A" stands out from the pack with a very realistic punch to the gut.

Wild Eye Releasing
Posted by Goatsden at 7:59 PM No comments: