The Sun Ra Arkestra Under The Direction Of Marshall Allen - "Points On A Space Age" DVD (director: Ephraim Asili) 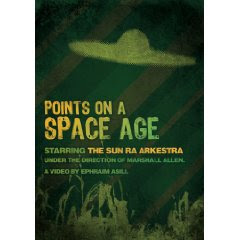 The legendary spiritualist/band leader Sun Ra himself may have departed from this world, but his legacy continues on with the Arkestra that he helmed as far back as 50 years ago. This fine (albeit brief) documentary shows that Ra's remaining space-jazz band members are as attuned to the jubilant spirit and cosmic consciousness as their beloved founder, and the group's new members are bringing it to a whole new generation (or three). Now, the music's a bizarre and beautiful combination of free jazz skronk, exploratory bebop, lounge, tribal, and gospel sounds, and this multi-cultural melange stands for far more than simply music. Sun Ra's Arkestra was intending to unify the people of the world for a greater good -- their positive energy is something that's sorely missing from so much of today's technological-oriented world. "Points On A Space Age" collages recent live clips with band interviews (and some necessary archival footage) to present a nice overview and summation of what the Arkestra was/is all about. Get hip to the far-out sounds of what's inside you (and all of us). (MVD Visual)

The Sun Ra Arkestra's label
Posted by Goatsden at 5:16 PM No comments:

This is interesting -- a promo video (by acclaimed video producer William Morrison, who is doing a visual documentary on the Process himself) for a book by Timothy Wyllie detailing the Process Church Of The Final Judgment, coming soon from esteemed subversive publisher Feral House. From the sixties 'cult' group to the nineties' reactivation as a media group led by members of Psychic TV and Skinny Puppy, The Process was an enigmatic phenomenon that touched a number of (in)famous people (for better or worse), and, unbeknownst to many, has probably influenced our entire culture. Besides information from former Process members and reproductions from original Process documents and magazines, the book also features the involvement of Genesis Breyer P-Orridge, among others. Count me in!