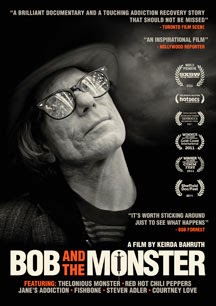 Great look at rock redemption and the power of music

In the making for over 6 years, this stunning documentary focuses on Thelonious Monster founder Bob Forrest and his journey, from the untamed and beyond-control excesses of his rock wildman days to innovative rehab counselor. In-between, we are treated to numerous interviews with Bob's friends and musical collaborators (including Red Hot Chili Peppers, Fishbone, Guns 'N Roses, Jane's Addiction, and Hole members, among others).

There's an extensive bio of Bob's journey from his happy childhood to his out-of-control addiction that nearly cost him his life. There's tons of rare footage of Bob's days fronting Thelonious Monster, onstage and off, along with candid interviews. If this were the heart of the movie, it would still be a top-shelf rock bio. But where many rock bios of this nature end tragically, "Bob And The Monster" is full of positive energy, redemption, and hope.

Bob's current place in the world isn't taking rock to excessive highs (though he is a world-class songwriter still), but in assisting those in need. Indeed, Bob Forrest has been saving lives through his unconventional programs. His experience with addiction has made him a sympathetic and knowledgeable drug rehab counselor for those with little hope. His distrust and avoidance of pharmaceutical "cures" for chemical dependency is wise and prudent. "Bob And The Monster" is a superb film for anyone interested in the rise, fall, and rebirth of a gifted individual. In short, this is a beautiful film that I can highly recommend.

Bob And The Monster site

Bob Forrest Music
Posted by Goatsden at 12:43 PM No comments: