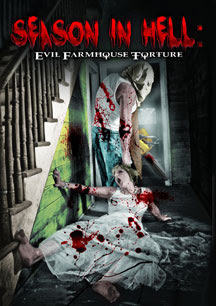 This low-rent "Texas Chainsaw" knock-off has so little going for it. Where do I begin? The goofy redneck farmer is reminiscent of a mix between Billy Bob Thornton in "Swingblade" and Larry The Cable Guy. But his accent comes and goes. And the overwhelming (and overbearing) use of digital effects is annoying, perhaps covering up some bigger mistakes in the filming.

The acting is terrible, the plot barely exists, the characters lack any depth, and, with the over-reliance on psychedelic effects, "Season In Hell" is a truly tedious experience. I could go on. Even the tortured girls in the basement are annoying, and, dare I say, deserve what they get. I could barely get through this one. (World Wide Multi Media)
Posted by Goatsden at 8:52 AM No comments:

"An Unholy Exorcism: The Devil Inside (aka "Chronicles Of An Exorcism")" DVD (director: NIck G. Miller) 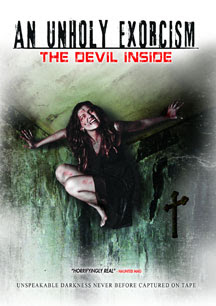 I don't like to be too critical of small-time indie films, but this one was tough to sit through. Why filmmakers (big or small) emulate past films (and ones of repute, even more bafflingly) is beyond me. Exorcism films, like shark attack films, have a huge legacy to live up to. "An Unholy Exorcism" comes across like a shallow, illegitimate, and amateurish simulation of the classic William Friedkin film, with a splash of "The Blair Witch Project". Call this one "The Linda Blair Witch Project", perhaps.

You already know the story. Experienced priests are called in to "rescue" a poor girl from a demonic possession. This one's in an abandoned shack in a cornfield. And there's a local priest who's skeptical of the exorcist's motives. Shot in rough, grainy, faux documentary-style, this one hides behind the hackneyed camerawork, inane script, and virtually nonexistent effects. This is a silly film that isn't worth pursuing. (WWMM)
Posted by Goatsden at 7:20 AM No comments: 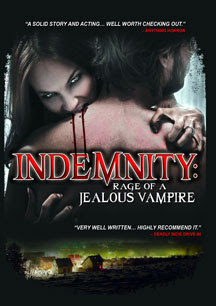 This short (60 minute) micro-indie film has some fair scripting and acting, but it never quite gets off the ground. Produced by, directed by, and starring David Dietz, this is a tale of a man being relentlessly pursued by an ex-lover, who coincidentally is a murderous, bloodthirsty vampire. The man holes up in a bar, where he encounters the town bullies and a wise bartender, who exposes his own story.

Suffice to say, "Indemnity" tries to be twisty and unpredictable, but doesn't hit the mark well enough. The sex and blood are even sparse to nonexistent. I have to say, I lost interest quickly. At least it was mercifully brief! And to add to the woes, my copy (a professionally-duplicated DVDR), had several digital glitches and moments of poor color and video quality. Sadly, this is one to avoid on all counts. (WWMM)
Posted by Goatsden at 7:16 AM No comments: