Amiina and Lee Hazlewood - "Hilli (At The Top Of The Mountain" 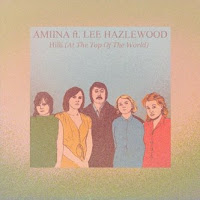 In late 2007, one of my favorite Icelandic groups, Amiina, collaborated with famous American singer-songwriter Lee Hazlewood, who added some very wise and beautiful (and possibly prophetic) words to Amiina's song 'Hilli'. Just after this track was completed, Lee passed away. The world is a much sadder place without Lee, though his 40 years of amazing songs will live on for all times. This song was released digitally through regular distribution channels in December, and on a very limited European CD single. Additionally, Amiina plan to release a 7" single including this song and a cover of Lee's 'Leather And Lace', with release date still to be announced. Meantime, here's the marvelous video... 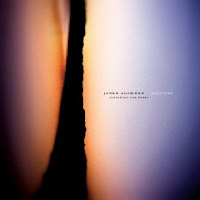 Swedish electronic composer Agebjorn's debut solo release would've been a superb arctic soundtrack on it's own, without a doubt. His cool and glacial soundscapes are lovely and mysterious, hinting at darkness and isolation, but remaining alive and hopeful somehow. However, coupled with the brilliant, wordless vocals of Lisa Barra, 'Mossebo' becomes a remarkably lovely set of exotic ambient songs that evoke naturalistic and multi-cultural climates. Barra's Indian-inspired vocals are at once ethereal and earthy, reminding somewhat of Lisa Gerrard or Sky Cries Mary's Anisa Romero - some esteemed company. That said, this album is simply a breathtaking combination of sound and voice. As for notable individual tracks, 'Ambient Computer Dance' breaks the mood a bit with an early Autechre-influenced rhythmic interlude, but the strings that summon themselves later in the track glide the vaguely IDM-ish track into more beautiful, almost classical territory. 'Siberian Train (parts 1 &2)' are fitting and evocative audio travelogues of the long, harsh Siberian railway journey, and 'A New Day Arrives' ends the trip with a gentle ambient whisper. Superlative work here. (Lotuspike)
Posted by Goatsden at 1:42 PM No comments:

Die Krupps - "Too Much History" 2xCD 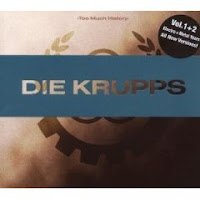 Jurgen Engler and his band have been innovators in their field, pioneering electronic rock and 'industrial dance' since back in the late 70's. But he/they have made some major stumbles in the past. Their disastrous (and mostly laughably pointless) electro-recreation of Metallica back in the early 90's spawned a great deal of scorn and laughter among metal-heads and industrial kids alike.The band's mid-late 90's phase involved an endless stream of remixes of the same songs...and to make it all even more confusing, the American pressings shuffled the songs and mixed it all up even further. But we can likely blame Cleopatra (their then-US label during this period) for that.
Here, after a hiatus (when the band recorded under the name Dkay.com), Die Krupps returns with a double-CD of remakes of their past work. A curious idea, if the songs were much different. Sure, the production is much better now - old songs like 'Gladiators' or 'Metal Machine Music' have a more pronounced bass kick, and more distinct electronic layering. And although 'Fatherland' (easily my favorite DK track from the past) is smoothed out a little too cleanly, the band's trademark 'Germaniac' is still plenty powerful and heavy. And who can't like the classic anthem 'Machineries Of Joy', which features guest vocals from Nitzer Ebb's Douglas McCarthy? The whole thing ends up memorably with a fun and faithful cover of Pop Will Eat Itself's 'Ich Bin Ein Auslander'.
But in general, 'Too Much History' is simply a 'best of' comprised of remakes and remixes. There are a number of different DK 'greatest hits' compilations already available. This re-hashing seems opportunistic and unnecessary. (Metropolis)

Die Krupps website
Posted by Goatsden at 11:44 AM No comments: 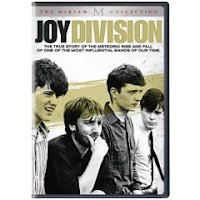 Watching this as a 1-2 punch, right next to 'Control' makes for the most comprehensive, and authoritative visual journey into the music of Joy Division, unquestionably. At a running time of an hour and a half, this feature-length documentary enlists the firsthand accounts of all surviving JD members (in remarkably in-depth interviews), as well as other 'I was there' types, including Curtis' little-seen mistress, Annik Honore, as well as people like Factory Records mogul Tony Wilson (who first signed the band), friend Genesis P-Orridge, photographer Anton Corbijn (who took the iconic photos/videos of the group), Cabaret Voltaire's Richard H. Kirk, the Buzzcocks Pete Shelley, and numerous others. There's tons of archival footage of the band, TV appearances, legendary producer Martin Hannett, associates, friends, you name it. The only person missing from the equation is Debbie Curtis - but some of her quotes are used here, so 'Joy Division' is as complete as could ever be hoped for. It's a beautiful film, illustrating the rough, industrial city that birthed the desolate sound, and how it shaped the Factory scene that Joy Division spearheaded. At the same time, it's a celebration of what made the group so great - and the important musical and cultural legacy they left behind. A magnificent documentary and a supreme example of a documentary done proper. (major release)

Posted by Goatsden at 1:50 PM No comments: 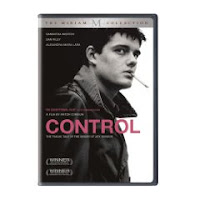 This wonderful and faithful docu-drama (the first feature-length film by celebrated art photographer Corbijn, who knew the band) centers on the rise and fall of Macclesfield, England's influential post-punk band, Joy Division, and especially on its troubled lead singer Ian Curtis.
As a group that would forever change the face of music, if only posthumously, 'Control' presents a decidedly unglamorous view of Curtis' unstable condition (he had epilepsy), and the relationships he continued until his passing in 1980 (on the eve of the band's first American tour).
British actor Sam Riley absolutely nails the job of taking on Curtis' look, mannerisms, affectations, and even his voice. In fact, the cast (Riley, Joe Anderson as Hooky, James Anthony Pearson as Sumner, and Harry Treadaway as Morris) actually played the songs here, and it's stunning to hear/see them 'becoming' Joy Division onstage! The other actors here all are spot-on, as well, and this film has a believable, true-to-life air, yet remains respectful to all involved (warts and all - it's not a great or triumphant tale, by far). Curtis' estranged wife, Deborah (played superbly and sensitively by Samantha Morton) plays a major role here, as her stalwart faith in Curtis (and his fidelity) is put to all kinds of unnecessary tests. Based on Deborah Curtis' book, 'Touching From A Distance', it's as perfect/accurate of a biopic as will ever be made on Joy Division, and any fan of the music should see this one. As ever, Corbijn's stylish black & white visual style is balanced and arty (he's known for his classic photos/videos for bands like Depeche Mode, U2, Front 242, and others), but never obscure or pretentious. A memorable film, and some of the best music to come out of the punk explosion. (major release)

Posted by Goatsden at 1:47 PM No comments: