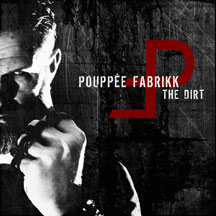 After an absence of 12 years, this Swedish electro-EBM act has returned, and damned if "The Dirt" isn't a fine retro-styled electro sequencer assault in the vein of classic DAF or early Nitzer Ebb. In fact, a notice inside the packaging (titled "EBM Is Dead") announces that many of these songs were originally conceived back in the late 80s, and have been entirely re-worked in 2012-2013 by the band, eschewing modern electronic trends and club-friendliness in favor of old-school aggression, directness, and ultimate simplicity. I say bravo!

Opening with the harsh "Bring Back The Ways Of Old", these 11 tracks are classic harsh, gutteral, and potent old-school electro -- with no frills and no apologies. My only complaints are with the often-clumsy lyrics, but then again this is a Swedish band, and English may not be their native tongue. "Bright Light" is brutish electro-thrash, harkening back to classics like Front Line Assembly's "Caustic Grip" era, but with more aggression. "Death Is Natural" slows things down a mite, but stays angry, dark, and heavy, as does the churning, pulsating "Promulgation". "Symptom" is another barn-burner of amped-up electro-thrash -- effective and cool. "The Dirt" is a solid release, tailor-made for fans of classic electro-EBM. 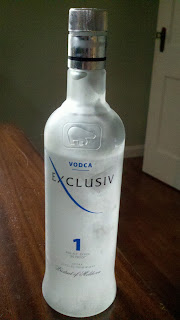 Exclusiv is a new import from the little-known Eastern European nation of Moldova (bordering Romania and the Ukraine). It's a wheat-based vodka, and at only around $10 per 750ml bottle, this is a seriously budget-priced beverage. Goatsden was given the opportunity to try this, with kind thanx to Ann at Utopia Communications.

First, I tried Exclusiv warm and straight. The initial nose was of strong grain alcohol.
Flavor-wise, I got peppery spice up front, followed by a strong herbal note afterwards. Of course, as with any straight vodka, the finish was a strong alcohol burn.

Upon chilling the bottle for several hours in the freezer, I then tried Exclusiv straight and chilled. It showed a smoother presence on the palate, retaining the spicy, herbal finish, but mellowing out the edges. I also, surprisingly, got a touch of fruit somewhere on the palate. Hmm.

Finally, tried this vodka as a mixer, alongside some peach and mango juice. I do not hesitate to say, this was a refreshing beverage, easy and smooooth all the way.

I say, unless you're buying vodka to drink straight (you're more of a true Russian than I), Exclusiv is a good value, and works perfectly well as a mixer for your next party. 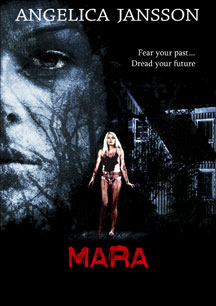 In ancient Scandinavian lore, a "mara" was a night-time demon that inspired bad dreams. Hence, we now use the word "nightmare". This Swedish-language film (with English subtitles) is a well-done horror/thriller with something to offer, even though it has nothing to do with the film's story or script. But more on that in a moment.

Starring the voluptuous and busty Swedish supermodel Angelica Jansson, "Mara" follows her character from a troubled childhood to adulthood, where she finds herself staying with some friends in the house where she, as a youth, witnessed her own mother murder her father. Needless to say, there are some ghosts still residing at that residence.

Jansson does a reasonable job here as the lead, but it's her shower scene makes it all worthwhile. Seriously, this is the most memorable part of "Mara"!  The cinematography is solid, but with a pedestrian script and predictable finale, it all falls apart. I give credit to the directors and effects people, as there are some moments of genuine tension and dread here, but it's not enough to save a fairly forgettable "OK" film.

MVD Visual
Posted by Goatsden at 5:50 PM No comments: 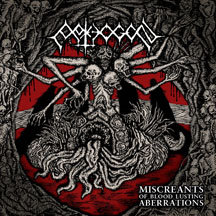 This is pure death metal brutality from the Phillippines, and it's a raw listening experience. But that's not to say that this sounds bad or amateurish, just that it's produced dryly, and sounds like there were a minimum of studio effects utilized.

Opening with the old-school death metal of "Atrocity Exhibit", Pathogen's take on metal isn't about technical virtuosity or complexity. On the contrary, theirs is a punk-like bare-bones attack, with a retro kind of vibe. "Monolith" is reminiscent of classic Slayer, complete with lightning solos. Other cuts are in a similar vein -- pure death metal with a crusty punk edge. It's all good here -- nothing too unique or noteworthy, but these lads' heads are in the right place.