This huge natural park/wildlife reserve (actually Arboretum and Research Forest) in the wilds of Clermont, KY is a superb place to hear the seasonal locusts. There are the original drones...
Posted by Goatsden at 11:32 AM No comments: 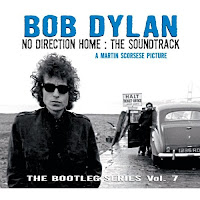 There's probably nobody in the history of American music more responsible for inspiring generations of aspiring songwriters than Robert Zimmerman, better known as Bob Dylan. A true literary genius, this prolific poet has had his fair share of artistic ups & downs, sure. That's entirely forgiveable, though, as he's been at it for 45 years now. Personally, I am most fond of his early-to-mid 60's work. This lengthy and exhaustive 150 minute set, compiled to accompany Martin Scorsese's documentary of the same name, embraces this period wholly. This is Dylan in his younger, leaner, and more hungry years, from 1962 to 1966. Certainly, much of his formative work owed a great debt to old-time folksters, namely Woodie Guthrie. Nonetheless, this era of Dylan's work carried a charmingly rough and pure vibe...it was wise, literate, clever, politically aware, and definitely packed with self-deprecating humor. 'No Direction' reprises many classic cuts from the man's anthemic canon (see 'Maggie's Farm', 'Hard Rain', 'Mr.Tambourine Man', etc.), albeit in previously-unheard live or demo form. Also included are home recordings, all sounding surprisingly crisp and clear. Really, this is a treasure trove of world-class songwriting (and performing), and it's astounding how very timeless this stuff sounds. Disc A is more streetwise and fiery (read: Dylan and his guitar with little embellishment), while disc B is more orchestrated (read: fleshed-out songs, more backing). All of it, however, is world class and completely worth owning for anyone who yearns to hear some music that lasts, and that has something to say. Wow. And to think that this man is still touring (quite exhaustively, too), and he's coming to both Louisville and Evansville later this year. Maybe I'll have to go. (Columbia) More info
Posted by Goatsden at 1:04 AM No comments: 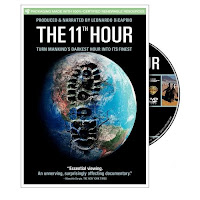 It was cool to be nihilistic and destructive as an angry teenage punk-industrial kid. That snotty abrasiveness and urge to 'smash it up' has it's place, I suppose, as a release valve of sorts. But later in life, a little experience and knowledge almost always makes that adolescent angst seem rather directionless and, well, stupid. Punk rock was always about breaking the rules, breaking with the accepted way of things, and dispensing with consumer culture. So why follow and consume blindly? So what does that have to do with this review?

Well, for starters, what could be more 'against the grain' than casting away the corporate monoliths who decimate rainforests and exploit valuable natural resources in the pursuit of dividends and profit margins? It's a death culture, and if this sounds all too 'hippie' and 'tree-hugger', well, so be it. I'd rather lie in the grass and actually hug a tree than embrace a smokestack billowing out toxic smoke. It'd be safe to assume, so would you, too.

Personal soapbox aside, 'The 11th Hour' is a 'green' documentary. Presented (and hosted) by noted conservationist Leonardo DiCaprio, this feature-length film documents and illustrates the condition of our fragile world, and ultimately, what can be done to halt the effects of pollution and environmental catastrophe (aka global warming). It's not likely to affect those who see global warming as a 'great lie' and a 'media hoax'. No, those people are probably unreachable. However, if you are like me, and genuinely concerned that we are pissing in our own water supply (and we literally ARE, and even worse...), then you will appreciate, and maybe even embrace the scholarly and beautiful ideas set forth here.

Discussions with a varied and international cross-section of concerned scientists, scholars, thinkers, and theologians , including Stephen Hawking, Mikhail Gorbachev, Chief Oren Lyons, Nobel peace prize winner Wangari Maathai of Kenya, Rabbi Michael Lerner (and many more) provide a cross-denominational perspective on the poisoning and toxification of our universally-shared Earth. It's a compelling and hopeful call to arms, and a highly worthwhile film to anyone who has an ounce of love for our planet and a flicker of hope for our children's children, who could inherit a burnt-out cinder of wasteland, or a lush, green, and colorful world packed with life and bio-diversity. Featuring some very impressive camerawork, and some amazing natural photography, 'The 11th Hour' could even be seen as a cross between the godlike 'Planet Earth' series, and Al Gore's informative and compelling 'An Inconvenient Truth' film.

The music soundtrack for 'The 11th Hour' is just as impressive, featuring grand sounds from Sigur Ros, Mogwai, The Dirty Three, Cocteau Twins, and more. If that doesn't make this one a 'must-see', I don't know what else you need. Kudos to Leo for putting his energy and influence to work for a greater good.

website + trailer
Posted by Goatsden at 6:56 PM No comments: 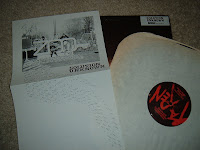 Those of you familiar with American indie rock are already more than familiar with the legendary Slint - the little Louisville band that captured the hearts of people all over the world with little more than their 1991 LP, 'Spiderland'. Seriously, this timeless piece of vinyl (or aluminum, if you're so inclined) will move you as much now as it did then. Anyhow, the seeds of Slint were sown in the punk rock scene of the 80's, and a large part of Slint's history lies in a long-forgotten punk band called Solution Unknown. Featuring future indie stars David Pajo (Slint, Tortoise, Papa M, etc. etc., now of Dead Child) and Todd Brashear (Slint, Palace Brothers, Bonnie 'Prince' Billy), as well as vocalist Eric Schmidt, bassist Kent Chappelle, and guitarist Mike Bucayu, Solution Unknown released one (highly limited) vinyl LP, titled 'Aggressive Fish/Karen' (though my copy makes no such proclamation).

The group existed from about 1986 to 1988 (with their final show opening for the mighty Chicago aggro-punk act Naked Raygun), and aside from a 7" single (and a comp appearance), this LP was the sole recorded output of Solution Unknown, and although a thorough compilation CD was released in 1996, it's impossible to find, as well. So without further fluff, here's the LP, as transferred from my original vinyl LP.

Pajo's new band, Dead Child, can be seen gigging around L-ville and beyond on occasion. I'll be catching them live one of these days, so expect a report at some point!
Posted by Goatsden at 10:32 PM No comments: 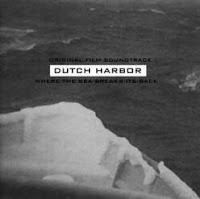 Comprised of members of various Chicago-area indie acts, this loose ensemble was formed by Michael Krassner in 1996 to record this soundtrack, but the revolving group has gone on to release several recordings since. This 1997 album (recently reissued) is a low-key set of musical vignettes that offer a moody and textural slice of atmosphere, mostly with a sort of gloomy or sad, introspective direction. I haven't seen the film, but apparently, it's not a romantic comedy! Anyhow, the group here includes contributions from notables like David Grubbs (Gastr del Sol), Doug McCombs (Eleventh Dream Day, Tortoise), Jim O'Rourke (Sonic Youth, Illusion Of Safety), David Pavkovic (Tortoise), jazzist Ken Vandermark, and even the mighty Will Oldham (on the album's only vocal take, the stark 'Ebb's Folly'). Really, this is a fairly ambient take on rock overall, with secluded piano melodies and generally inobtrusive tracks that wax and wane. It's not especially memorable, but certainly not a bad mix of improv, indie rock, and perhaps some experimental flourishes here and there. Me likes, but I don't see it getting a lot of replay around Goatsend HQ. (Atavistic)
Posted by Goatsden at 9:28 PM No comments: 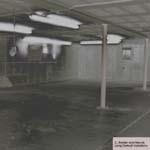 A few years ago, veteran sound sculptor and Vuzh label-master c. reider recorded a set of improvised ambient sounds in an old abandoned factory, and released this online to a fair amount of acclaim. That recording forms the basis for this remix project, and it succeeds handily where most traditional remixes don't. These 4 extended pieces all run at over 14 minutes apiece, and none feature any semblance of rhythm or easily-discernable structures. 'Long Defeat Variation one by Mystified' is a tense, metallic drone work that summons the dark and arcane vibes of prime Organum or Nurse With Wound's majestic 'Soliloquy For Lilith'. Beautiful and mystical, somehow. Reider's own mix is more dirgey, dank (that's a compliment), and nearly industrial (in the classic sense), suitable for use in a horror flick, perhaps. Reider's drones and deep reverberations summon visions of ghostly apparitions and eerie landscapes. Well-done. The third mix, by another Godsend/Goatsend favorite, Kirchenkampf, brings in percussive elements (what sounds like chains and metal being dropped/dragged/smashed) and smooths it out with reverb, creating an interesting mesh of ambience and unease. The final mix, by Gurdonark, is a more subtle and ambient variation, with light, swirly tones and shards of drone - more in a minimalist spirit. Overall, 'Long Defeat Variations' is a superlative release of contemplative and meditative ambience, with a dark streak that's undeniable and an ominous foreboding that's somehow inviting. (Vuzh Music)

This wonderful release (and others) can be downloaded free (and legally) from the artist here
Posted by Goatsden at 7:08 PM No comments:

Buckethead - "From The Coop" CD 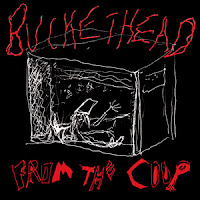 Long before his wicked guitar-maniac solo releases and his work in groups like Praxis and Cobra Strike, and before his publicized alliance (and exodus) from Guns 'N Roses, Brian Carroll (aka Buck) produced this demotape way back in 1988. It's admittedly pretty rough stuff - mastered from a lo-fi cassette, and with musical backing from only a primitive drum machine. But even from this old demo, the warped mind (and persona) of Buckethead was already well-developed, and these songs range from bluesy ('Hog Bitch Stomp') to wild stadium-style solos and wicked sci-fi interludes. Buckethead is perhaps the foremost guitar-shredder of his time, and though this lo-fi collection is probably best kept to the hardcore fans, it's certainly nothing to sneeze at, either. Pretty impressive stuff, but if you're unfamiliar with the man(?) they call Buckethead, investigate his recent work before diving into this one. (Avabella Productions)
Posted by Goatsden at 7:02 PM No comments: