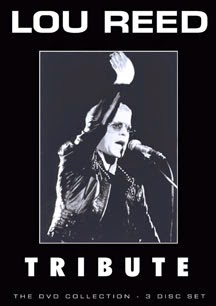 Another opportunistic repackaging from Pride DVD, this set includes 3 previously-released (unlicensed) documentaries featuring Lou Reed and the Velvet Underground. With Lou's passing making recent headlines all over the world, this re-release, however worthy, is still rather shamefully mercenary.

The first DVD, "Punk Revolution NYC", focuses on the 1966-1974 New York proto-punk scene -- The Velvet Underground, New York Dolls, and CBGB's feature most prominently. Also discussed are Television, Suicide, Wayne County, Blondie, Patti Smith, Talking Heads, and Andy Warhol's influence on the scene. Many of the original artists are interviewed, alongside the usual critics and journalists. This 87-minute film includes a great many historic videos and photos, and with the insights of the artists' themselves, it all makes for a superb portrait.

The next disc is "The Sacred Triangle: Bowie, Iggy & Lou 1971-1973", examining the personal and artistic symbiosis that went on between these rock legends in that era. I've already reviewed this release, on it's own, back in 2010:

Finally, the remaining DVD in the set is "The Velvet Underground: Under Review". This one covers the band's entire existence and all major releases, and features archival interviews with most VU members and colleagues, as well as Andy Warhol, historians, journalists, and even fans like Dean Wareham (Galaxie 500, Luna). With plenty of live footage and photos, this is probably the closest we'll ever get to a comprehensive documentary on the Velvet Underground and their legacy.

So despite serious fans likely already having these volumes, "Tribute" does include some worthwhile material, and could be a good bargain for those who didn't already purchase  these DVDs individually.