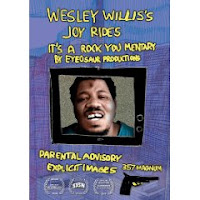 Chicago-born artist and musician Wesley Willis passed away a few years back, but not before he found a receptive and enthusiastic international audience through his music and drawings. The unlikely (and self-proclaimed) rock star, who was tormented by chronic schizophrenia (and some tumultuous inner "demons"), brought a larger-than-life spirit and over-the-top personality to whoever would lend an ear.
This touching documentary succeeds in capturing the essence of what made his life so unusual and so inspiring. It's a non-stop joyride, to use one of Wesley's favorite expressions. Seeing him hawking his CDs on the streets, or reveling in the audience's applause, or even chatting with the haircutters during a simple haircut, proves to be a funny, entertaining, and charming experience. His simplistic, sometimes-childlike songs were based around his day-to-day experiences, and he wrote songs for nearly everyone he befriended. Directors Bagley and Shively have compiled footage of Wesley in his later years, and it's a fitting tribute to the man and his legend, and includes interviews with Wesley's family, as well as his closest friends. It's evident the filmmakers were close to Wesley, as this loving portrait of an artist who, in his own way, changed the world for the better. He had a larger-than-life joviality and sense of wonder about the world that made him an icon and a character like no other. This DVD is a harmony joy bus ride. (Eyeosaur Productions / MVD Visual)

Posted by Goatsden at 8:03 PM No comments: 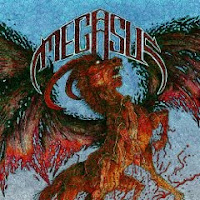 Dense, large, and rumbling aggro-doom-metal from some Rhode Islanders who collect their paychecks from ("Rock Band" and "Guitar Hero" video game developers) Harmonix, and a drummer who plays bass in Lightning Bolt. This is their debut, and it whacks handily with mighty riffage and pummeling drumming, akin to some of the better stoner-metal acts around. "Swords" is a massive, primal mountain of droning riffs and thunderous drums, laying waste to the modern world. It's not for the faint-hearted, for sure. "Hexes/Szaadek" is another behemoth of loud, bonecrushing aggression, like if Slayer teamed up with the Melvins, got high together, and then got into a raging fist-fight. "Red Lottery" is another speedy assault of dangerous noise and fury. This is some evil and engrossing metal of remarkable acumen. Fully worthy. (20 Buck Spin) 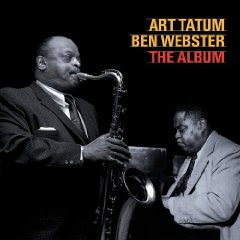 Originally recorded in 1956, and with some added Tatum solo cuts from 1953, this selection of smooth piano-led jazz was the culmination of years of experience from the masterful Tatum/Webster Quartet (though it isn't billed as such, oddly). Tatum's smooth (and seemingly omni-dexterous) piano pyrotechnics still wow critics and fans today, while Webster's husky tenor sax adds a late-night vibe to the sound, which ranges from the laid-back, melodic "Gone With The Wind" to the wild rollercoaster of "Have You Met Miss Jones?", where Tatum takes the lead and shows why he's considered one of the finest pianists, period. "My One And Only Love" is sweet and gently seductive, as the title suggests. Without accompaniment, Tatum's fantastic solo version of "Have You Met Miss Jones?" (featured later in the disc), is so kinetic and sprightly, I easily forgot this was just one man with two hands playing. Tatum's superhuman energy and evolved melodic sense is the focus here, and this release is a superlative document of his immortal style and grace. (Essential Jazz Classics)
Posted by Goatsden at 7:19 PM No comments: