Spain's greatest treasure, asset, and claim to fame in the whole 'industrial' genre has been, unquestionably, the pioneering Esplendor Geometrico. Since 1981, these boys have been producing some rather extreme meldings of hypnotic electronic beats with punishing sonic noise and ferocity. EG is rhythm - forceful, insistent, and aggressive. Imagine if Kraftwerk's robotic percolations met up in a back alley with Whitehouse or early Throbbing Gristle, and you'd be somewhere in the ballpark.

'8 Traks And Live' contains an audio disc of, yes, 8 tracks of machine beats and varying degrees of noise. No two songs sound alike, certainly a credit to the programming skills of Arturo Lanz and Saverio Evangelista. You could dance to this, likely, but EG's music cannot in any sense of the word be considered commercial. It's packed with depth, subtle rhythmic fluctuations, and some oppressive re/percussions.

The live DVD, recorded at the Decibelio Festival in Madrid in 2006, shows the duo's complex beat-driven madness (ranging from noise-oriented to almost jungle/drum & bass) in a public setting, and it works exceptionally well. Backing abstracted visuals by Luigi Perilli and Evangelista set the tone for a series of well-shot, multi-angle performances, some with the unprocessed, raw shoutings of the group. The camera-work maintains the excitement and energy of the show, and the group really breaks a sweat punishing those machines. A great set of heavy-duty tunes that prove without a doubt that Esplendor Geometrico are a force to be reckoned with, even 27 years into their careers. Now if only someone stateside would do these guys some justice and release a retrospective or collection on these shores. (Geometrik)

EG official website
Posted by Goatsden at 1:28 AM No comments: 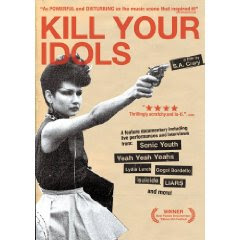 Tracing the history of the famous New York 'no wave' scene of the 70's up until it's supposed re-emergence in recent years, Crary and company manage to compile some interviews and footage of some pretty instrumental progenitors of the NY noise scene. Appearing here: Suicide's Martin Rev, Jim Sclavunos (who curiously details his early sexcapades with the notorious Lydia Lunch - why this was included is a mite suspect, but nonetheless it's an entertaining dialogue), Lydia, Glenn Branca, Arto Lindsey, Michael Gira, Jim Thirlwell, Lee Ranaldo and Thurston Moore. All of these sonic innovators contribute some 'been-there' thoughts and observations on what made this 'scene' so inspirational. And the old footage (though often rough and grainy) is amazing - particularly the early exorcisms of SWANS' classic noise-throb days. Talk about gutteral and abrasive. That was the serious shit - forget metal or punk.

But far from just a look at the past, 'Kill Your Idols' also spends a good amount of time examining some of the current wave of NY bands - Yeah Yeah Yeahs (Karen O seems pretty oblivious, honestly), Gogol Bordello, A.R.E. Weapons (parody or assholes?), Liars, Flux Information Sciences, and Black Dice. The comparisons between old wave and new wave here are very telling, and a bit alarming. Whereas Eugene Hutz of Gogol Bordello seems to have a firm grasp on what makes music and art unique, some of the others included here seem particularly clueless. A shame, but at least we have all the great records from the 'No New York' period to remember it all by, right? (Palm Pictures)

Posted by Goatsden at 4:19 PM No comments:

Ron Asheton, founding guitarist of the Stooges and immortal rock presence, passed away at his home in Ann Arbor, Michigan recently. His guitar-work inspired nearly every punk, noise, shoegaze, metal, rock and alternative band since the late 60's. Led by the inimitable vocalist Iggy Pop and also featuring Ron's brother Scott Asheton (drums) and Dave Alexander (bass), the Stooges created their own language in the lexicon of rock, and providing a much-needed dose of nihilism to the end of the 'Summer Of Love' sixties. The Stooges had recently reformed and toured with Ron on guitar, and they released their 'comeback' LP, 'The Weirdness', in 2007.

Iggy himself has issued a press release that said: "I am in shock. He was my best friend."

Posted by Goatsden at 6:51 PM No comments: 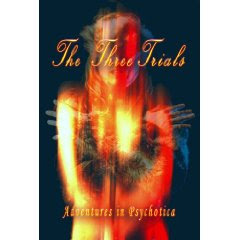 This feature-length indie flick from renowned ambient/industrial composer Greif is a study in psychedelic post-industrial psycho-sexual fantasies. Using a variety of notable artists as the soundtrack (SPK, Controlled Bleeding, Lustmord, Illusion Of Safety, Nocturnal Emissions, Nurse With Wound, Muslimgauze, and Greif himself, among others), this tale unfolds as a nun named Catherine (played by the lovely Molinee Green) stumbles across the convent's Mother Superior and a priest engaged in a scandalously compromising position. It's a seductive, beautifully-visual, and artfully-rendered picture of sexual excess, as Catherine is whisked off (abducted) to a strange castle where she makes some rather fantastic liaisons with some other abductees (yum), but soon finds herself in grave danger. Her escape sees her dressing solely in a fox carcass, and she is saved by a beastly man-yeti who becomes her lover and eventually transforms into a human who becomes her personal master in an S&M relationship. Got all that? Catherine transforms herself through all of these surreal scenes, and the integration of experimental film techniques interspersed within the storyline makes it never truly clear what is imagined and what is truth. An odd journey, certainly not for sexual prudes (or religious prudes) as there are a number of pretty graphic scenes here that will titillate and/or offend. Solid work, certainly with aspirations far and above mainstream cinema. And can't fault that soundtrack, either. Kudos! (Swinging Axe Productions)

Posted by Goatsden at 1:55 AM No comments: