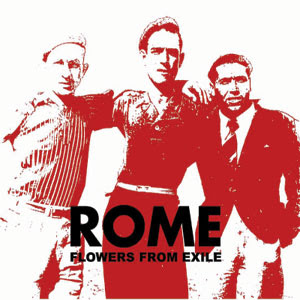 Hailing from Luxembourg, and led by the sonorous, rich baritone croon of leader Jerome Reuter, this group has built up a rabid European fanbase. "Flowers From Exile", their 4th album, is, without a doubt, their strongest. And though it may bear some superficial similarities to the dark, occult folk of Death In June at times, Rome offer a broader and more diverse musical palette, and one that transcends genre categorizations. Indeed, there are echoes of dark poet/songsmiths like Cohen, Cale, or Scott Walker here. There's some French chanson inspirations, too, if you listen close enough. But really, Rome are their own unique beast.
"Flowers" is a conceptual album, dealing with the theme of exile and reflects on the Spanish Civil War of the 1930's. Perhaps a lofty and pretentious premise, but in this case it works quite nicely. After an instrumental intro, "The Accidents Of Gesture" begins in grand fashion, with a triumphant and sweepingly cinematic build-up, and Reuter's powerful, well-spoken words leading the charge. This, to me, is the album's tour-de-force -- packed with emotion, mood, tension, and old-world beauty. "Odessa" is a more intimate, traditional folk song, with a more sensitive nature. It's moody, slightly sorrowful, and really quite catchy. Throughout the album, Reiter's strong and emotive vocals capture the limelight, though the lush instrumentation is equally as compelling, with a superb sense of dynamism and restraint. The balladic title track, which segues into "Flight In Formation", closes it all out, and together, these form a somber and fitting end, complete with martial horns and the cool sounds of a tide coming in from the sea. And although it's not perfect -- some songs in the middle of the album seem to evaporate from memory pretty fast-- the best stuff here is just incredible. (Thanx to Adam Whalley for the tip! If we ever cross paths, I am buying you a good brew!)(Trisol Germany)