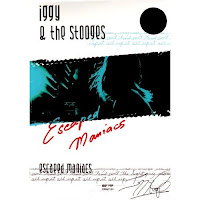 Iggy Pop is a super-human. He is a rock god. If you have any doubts to that kind of lofty praise, a quick browse at the first disc of this set will confirm it. Recorded live in Belgium in 2005 during the Stooges historic reformation tour, this DVD set captures the ferocity and fearlessness of Iggy the entertainer. At 61-years young, the former Jim Osterberg is primal, relentlessly energetic, provocative, and a stage-driven wild animal who puts to shame rock stars half his age. The man oozes attitude and snarl. Here, joined by Stooges Ron and Scott Asheton and former Minutemen/firehose bassist Mike Watt, he takes control of the stage and never gives it up. The show, naturally, highlights plenty of the Stooges classic pre-punk rock, and great songs like 'I Wanna Be Your Dog' and '1969' are amped-up and still great after 30 years. He even ushers a bunch of fans onstage to dance (and even sing along with) a few songs - much to the chagrin of security! Hah!

The second disc is full of bonus materials, including a documentary '30 Years In 60 Minutes', which is very unsatisfying and scattered. Somewhere out there is a thorough and exhaustive history of Iggy Pop on video - but it's not here. Hell, a feature-length film would be barely touching the surface and stories that surround Iggy and his years in the 'business'.

Anyway, in-depth interviews with the surviving Stooges (and one of Pop's longtime girlfriends, even) are entertaining and informative, with Iggy himself, of course, being the highlight. The man is full of a wealth of knowledge and experience, and his animated and well-spoken demeanor makes for a fun and honest interview.

Posted by Goatsden at 8:00 PM No comments:

Just Say No To Veep Palin!

It should be known that this is the senator who supports the decimation of native wildlife for profit and personal gain. She has sued to keep the polar bear off the Endangered Species list, and, most telling of all, her husband is reportedly employed by British Petroleum (BP) - a major oil company, so the 'need' to drill in remote, unspoiled landscapes is of course, a business decision for the Palins...and furthermore... 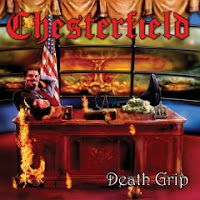 This Wyoming/Oregon trio's been around for years, but release-wise, this appears to be their full-length debut. Corralling the energy and snarl of classic punk, and fusing it with a pop sensibility isn't a new idea, but Chesterfield do it with fervor and more aggression than most. It's as if their brand of pop-punk was performed by mean hardcore dudes who've spent a lot of time playing in some pretty rough places. Forget the wussy pop-punk on the radio - Chesterfield bring it loud and punchy, and it's about time. 'Fireflies' is almost proto-metal in execution, but keeps itself free of such excesses. In fact, these guys have a rare gift of melody, while remaining powerful. The raw, un-glossified production (by the band and Doug Hill) works well, and is likely a faithful reproduction of the group's live show. If you like your punk-edged tunes hard and heavy, yet tuneful, Chesterfield have produced a fine record that's right up your alley. (Mental Records)

Chesterfield's site
Posted by Goatsden at 4:44 PM No comments: